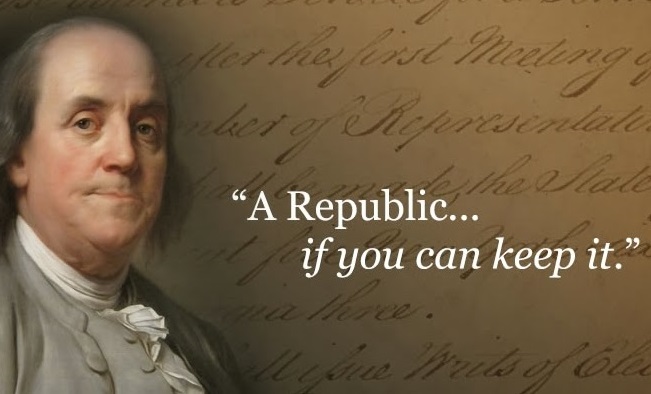 How America Failed to Keep the Republic

Through the creation of the “Administrative State,” with vast bureaucracies violating the separation of powers in ways unaccountable to the people and the Constitution itself, America has failed to keep the republican form of government created by the Founders.

Former Reagan administration lawyer Charles Cooper has penned a must-read essay, “Confronting the Administrative State,” which in terms of brilliance in describing the root causes plaguing America’s governance, ranks with Angelo Codevilla’s “America’s Ruling Class — And the Perils of Revolution.”

Cooper’s essay describes how America has failed to keep the republic because the constitutional structure created by Franklin and his fellow Founders is no longer the law of the land. The Administrative State “has become a sovereign power unto itself, an imperium in imperio regulating virtually every dimension of our lives. Its nearly 450 agencies are manned by legions of bureaucrats, now numbering almost 2.7 million,” writes Cooper.

Unlike the frequent violations of the Constitution through legislation or executive orders that may be reversed by future Congresses or presidents, the Administrative State has become an institutionalized violation of the constitutional structure itself.

Congress has delegated lawmaking functions to bureaucrats; bureaucrats have usurped the power to adjudicate disputes; and courts now defer to bureaucrats in interpreting the law. This is exactly contrary to the purposes of the Constitution, and has been a “fundamental transformation” of American government starting decades before Barack Obama ever uttered the words.

Citing Federalist Papers such as James Madison’s No. 51, Cooper explains how the separation of powers was designed to create conflict among the branches of government, which was “admitted on all hands to be essential to the preservation of liberty.” Instead of “ambition . . . [being] made to counteract ambition,” the Administrative State grew under a ‘you scratch my back, I’ll scratch yours’ approach among the three branches of government.

The principal villains in the destruction of the republic are not the electorate or those whom they elected, although elected officials clearly share the blame. It has been the courts, which time after time since the 1930s refused to be the bulwark for liberty by preserving the separation of powers. The courts have dismantled the constitutional structure by yielding powers to the Administrative State in ways not authorized by the Constitution. By conceding to the accretions of power within the Administrative State, the courts have institutionalized violations of the Constitution, and replaced its carefully planned structure with the Leviathan.

The other villain is Woodrow Wilson and his progressive roadmap of transplanting the Constitution by giving government officials “large powers and unhampered discretion.”

The lonely hero in Cooper’s essay, who seems to be holding his finger in the dike against total transformation away from a constitutional republic, is Justice Clarence Thomas. In the past term at the Supreme Court:

…four opinions authored by Justice Clarence Thomas…call into question the constitutionality of the massive and largely unaccountable bureaucracy that we commonly refer to as the administrative state. In bold and clear prose, Justice Thomas explained how the basic principles of our Constitution’s separation of powers are incompatible with the system of bureaucratic rule that took root in the Progressive era and now reaches into virtually every realm of American life.

Cooper notes Justice Thomas’ reliance on the brilliant scholarship of Philip Hamburger, whose book Is Administrative Law Unlawful? has exposed the flawed, even unlawful, bases of the current Administrative State.

I would add two thoughts to Cooper’s brilliant analysis.

The power given to administrative agencies to issue their own warrants for papers, emails and other private property without probable cause or oath and affirmation before neutral judges has created a police-state effect. “Administrative subpoenas” are judge-less warrants. They are not only institutionalized violations of the Fourth Amendment, but are used as blunt-force instruments to create policy and silence critics of government through extortive concessions by their targets.

Secondly, the destruction of our republican structure of government at the federal level has trickled down into the states, which to varying degrees have adopted the Administrative State methods of the federal government. States themselves have a constitutional obligation under Article IV, section 4 to follow a republican form of government, yet many states have transplanted administrative discretion for the constitutional rule of law.

Opponents of a constitutional convention will find fault with Cooper’s recommendation for one, but that proposed solution should not distract from anyone’s appreciation of how his analysis of the problem shows the roots go beyond merely a solution through the ballot box. The destruction of America’s constitutional republic has become institutionalized, and may be beyond cure by even an army of constitutional conservative legislators.

Cooper’s is a must-read essay for political commentators, conservative elected officials, and anyone who is serious about trying to understand the sad state of how America is governed today in violation of the Constitution.