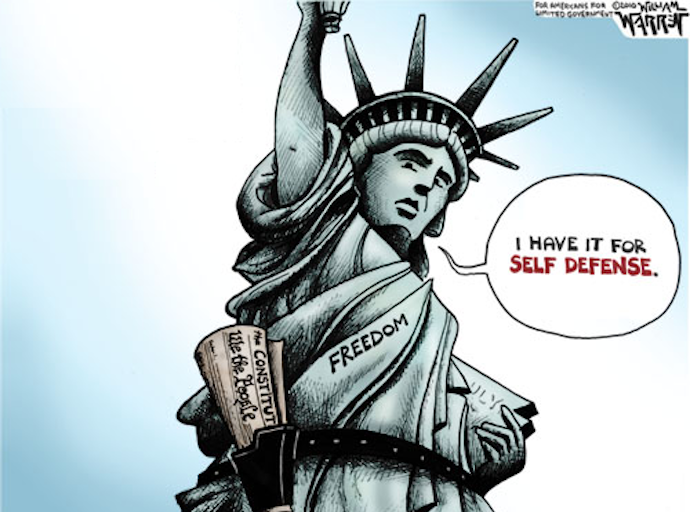 How is abortion protected by the Constitution but gun rights not?

Whole Women’s Health v. Hellerstedt was a 5-3 decision ruling on the concept of the “undue burden” originally established in Roe v. Wade. Roe stated, “a state has a legitimate interest in seeing to it that abortion is performed under circumstances that insure maximum safety for the patient… a statute which has the effect of placing a substantial obstacle in the path of a woman’s choice cannot be considered a permissible means of serving its legitimate ends.”

In the most recent decision, the Court ruled that Texas’ law placed too much of an obstacle to getting an abortion, reaffirming that no obstacle, such as requiring clinics to meet ambulance surgery center standards, may be used to limit this right.

But abortion is not an explicit right under the Constitution. Still, the Supreme Court refuses to allow any burden to prevent it from being exercised. The Justices continue to treat the right to abortion as a right equal in strength to the right to due process, trial by jury or free speech.

By this logic, then, federal courts should equally treat the right to keep and bear arms, a fundamental right actually included in the Constitution’s Second Amendment, with the same level of respect.

When Judge Myron Thompson wrote his decision in Planned Parenthood Southeast v. Luther Strange in the Middle District of Alabama, he explained this correlation. Writing,

[A]t its core, each protected right is held by the individual: the right to decide to have an abortion and the right to have and use firearms for self-defense. In the context of both rights, the Supreme Court recognizes that some regulation of the protected activity is appropriate, but that other regulation may tread too heavily on the right.”

He explains that since both inherently involve other individuals or potential individuals, there is a level of supervision but, in his view, any effort to deliberately prevent an abortion is as unjust as preventing gun ownership.

Now to be consistent the Supreme Court must use the logic they used in Hellerstedt once again, this time in the 9th Circuit Appeals case Peruta v. San Diego, which denies individuals the ability to carry concealed weapons without adhering to strict criteria which changes from county to county.

Arbitrary guidelines like “good moral character,” and demonstrating “good cause” outside of simply self-defense or self-interest are vague burdens governments against gun rights impose to prevent ownership. In abortion cases the Supreme Court ruled burdens just like these which are used to limit abortion rights are unconstitutional, the rulings dealing with the right of gun ownership must be viewed by the same standard.

The next Supreme Court docket will likely include the Peruta case, making it more important than ever that the Justice replacing the late Justice Scalia be one to vote in consistency with the fundamental right of being pro-choice on gun ownership.

In the last major gun rights case, D.C. v. Heller it was Justices Scalia, Roberts, Kennedy, Thomas, and Alito all voting in favor of the Second Amendment right to keep and bear arms as an individual right. However, with Scalia’s passing it is more feasible than ever that if, for example, Hillary Clinton the presumed Democratic nominee, is elected president all of these established precedents protecting gun rights will be thrown away with a 5-4 decision against the second amendment.

Our next president will not just have power over the executive office but the fundamental rights of the Second Amendment to be practiced without undue burden.

How is abortion protected by the Constitution but gun rights not? was last modified: June 30th, 2016 by Guest Contributor Natalia Castro

Yes, the Democrats don’t care about the law as much as Republicans do. It has always been so. The Democrats want what they want, and they have no objection to twisting the law until the law means whatever they want it to mean. The constant erosion of respect for the constitution has rendered that document nearly irrelevant now, because the only thing that matters is how many liberals are on the court. Once we have five Democrat appointees, they will consistently vote for the meaning that supports their goal, without regard to original intent. They are not even embarrassed about it, because their supporters treat them like heroes when they do this, e.g. abortion “rights”.

Democrat appointees are unified in their purpose to a vastly greater degree than Republican appointees, which is why all the so-called swing votes on the court are Republican appointees. Democrats only care about results; Republicans are at least a little conflicted about principles regarding the rule of law, but not much. Republicans are far more concerned about appearing to be fair and balanced, even more than they care about the law. They are always defending themselves personally, to appear to be open-minded and generous personally, rather than defending the fundamental fairness built into the constitution.

We understand what the Democrats are doing, but it really is gutless Republicans who are most responsible for the decay of the country, because of their refusal to actually defend the foundation of the republic. Should we be surprised that Obama does whatever he wants to do while daring Republicans to stop him? Obama knows with great confidence that he is completely immune from impeachment or any other consequence. Thankfully there are still a few principled judges that stand up to him once in a while, but our Republican congress as a whole has been completely useless.

Republicans have done immense harm by not defending the constitution of our country, not upholding the virtues that made the country great. Instead Republicans are trying to become the Democrat-lite party, trying to appease the mob by adopting the language of the Democrats, even accusing other Republicans as being xenophobic racists to distance themselves from their fellow Republicans, in a futile attempt to appear as a more personally superior kind of Republican; all of which just accelerates the destruction of the party. As a consequence, we are approaching mob rule now. Our constitution will just morph with the majority; the bill of rights is now under constant threat because no political party, not even the once great Republican party, has the full will and integrity to defend the republic vigorously and unashamedly.

Liberals could care less about the rule of law. Roe v Wade is a classic example. Of all the heinous things about that abortion of a judge fabricated “law”, the worst is that it was a giant usurping of democracy. If liberals wanted abortion, they should have legislated it. They don’t even care about a regular process as long as they get their political results. When Obama is in power… why he has the right to create executive orders to do whatever the hell he wants! He just need write a memo in some instances (his Executive crafted amnesty for illegals wasn’t even based upon an Executive Order… it was a memo in the bowels of Homeland Security.)

And this is going to get worse as they grow more powerful. You can probably count your guns rights gone within ten years or so.

I just started reading the Bull Elephant a few months ago during my spare time. I really enjoy reading the opinions of Virginia conservatives whether it be on local or national level politics; and whether I agree or not with thier opinion. What I have not enjoyed are some of the mean-spirited comments that have been posted in many of the articles appearing on this site. Many of these comments come from the same people or from a group of people who have a common thread (or theme). It would be nice if commentors attacked ideas and not people. Attacking people just exposes the attacker for who they really are….you fill in the blank.

Want to be a very successful contributer at BE, Natalia? Well then, remember what Bill Clinton said “it’s the economy, stupid”.

It’s not gun rights, abortion, death penalty, but it is about the economy. That is why Trump won. Just the mention of shutting down Communist China and the Mexican border and he knocks out 16 establishment talking heads and their billionaire sponsors. Now, the establishment
is really pissed because Trump basically gave them the political finger by saying he would take their cheap labor away.

So, please, remember that next time you write somthing.

Jim, please make at least some effort to stay on topic.

Ok, I will delete it if you like? Was meant to be a suggestion.

No need to delete! The post is about guns and abortion. Responding to it by saying the economy is what got Trump votes pre-supposes that everything–including this post–is about Donald Trump, when the discussion Natalia has started here is not.