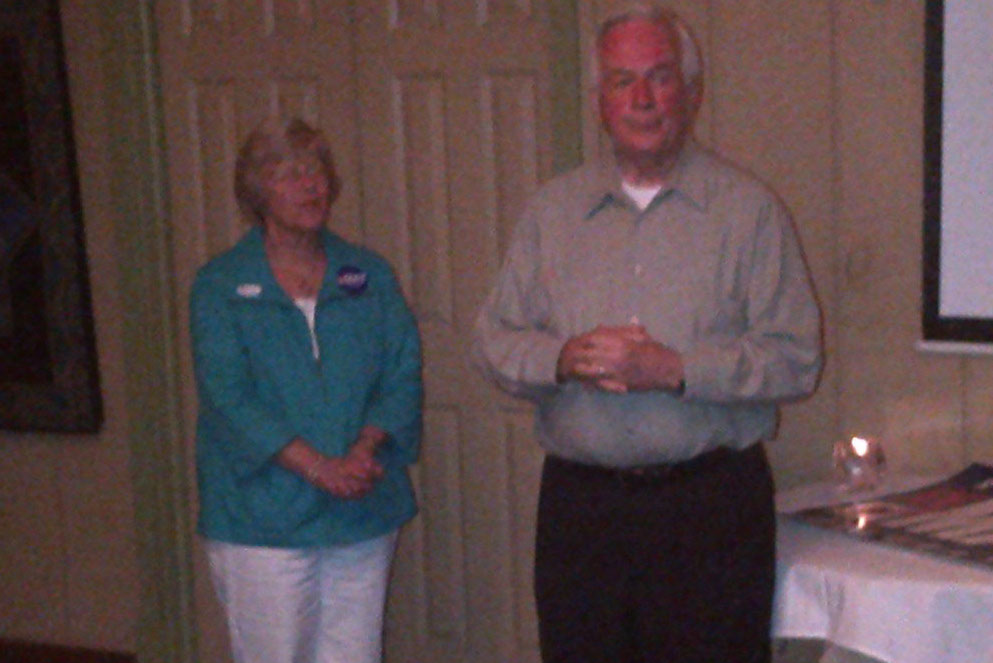 Joe May and his wife, Bobbie, on primary night in June 2013 when he lost the GOP nomination to Dave Larock

It’s an uphill battle, but if Joe comes down from the cloud, he could do it

The 33rd State Senate District, which is being vacated by Democrat Jennifer Wexton, who was elected to Congress Nov. 6, has been controlled by Democrats since 2005 when then Republican Sen. Bill Mims resigned to become Bob McDonnell’s deputy attorney general.

The fact is the district is very Democratic — some 2,400 attended the Democrat primary that nominated Del. Jennifer Boysko vs. 72 for the Republican nominating caucus Nov. 18 that nominated Joe May, but had such low turnout because it was pulled together last minute.

May, who represented part of the district in the House of Delegates for some 20 years before losing his primary to Dave Larock in 2013, has an uphill fight on his hands.  For one, he is not exactly a favorite of conservatives in the party, who still resent a number of his votes on taxes, guns, and his independent run against Wexton and Republican John Whitbeck in the 2nd special election to fill Herring’s seat in 2014 (which Wexton won 52%, which means May’s 10 percent was not a factor in Whitbeck losing and John has endorsed him for the Jan. 8 special election).

But he has the financing and ballot name-recognition.  In addition, turnout is usually very light in these special elections (under 10 percent), and I believe Republicans are hungry for a win.  I believe Republicans in the Senate would desire some wiggle room by trying to win this seat to cushion them from the potential impact of losing Senate control to the Democrats if another GOP-held seat falls the Democrats in 2019.

So, here is my advice on what Joe May needs to do to win:

Republicans hold a majority in the General Assembly by a thread right now due to the Blue Wave in November 2017. If Democrats win control 2019,  they control redistricting for both congressional and General Assembly seats in 2021. This could mean the end of a two-party system in Virginia for many years and the potential for our state to become a unionized, high-tax, big regulation, sanctuary state.  This should worry all of us, including our opponents, who are more mainstream (for now).

So, Republicans can gripe all day about Joe May’s past positions, but he is our candidate and has the experience and knowledge and connections in Richmond to help Loudoun and Western Fairfax, and will support GOP redistricting. Republicans should not only vote for him Jan. 8, but get out there and work hard for him and appreciate the fact he stepped up to the plate to take time from his successful business to run and serve again.

However, it all begins with Joe May and if he can come down from the cloud and ask people in the party to help him win.

How Joe May can win the special election for the 33rd District State Senate seat was last modified: November 25th, 2018 by Guest Contributor Ken Reid