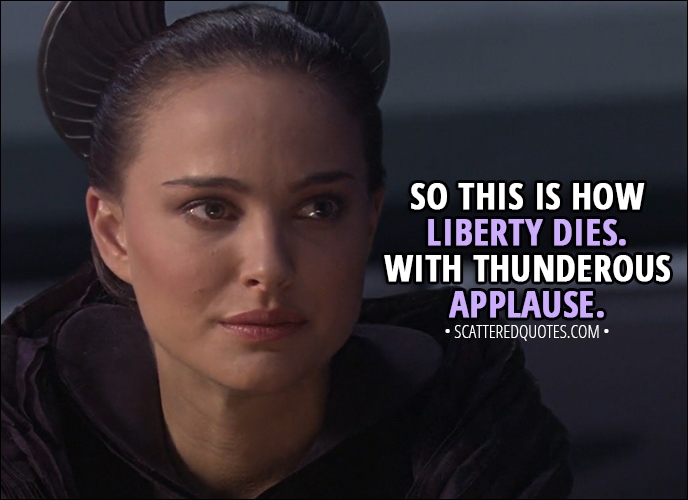 In Star Wars, Episode III, Senator Padme AmidalaÂ utters â€œso this is how liberty dies, with thunderous applause,â€ as the intergalactic senate votes unlimited powers to the chief executive and it turns out really, really badly. In fact, if you are paying attention, you might realize we are living that moment.

Right now the political class is rushing to do something, anything, to appease the cries of those who seek security over freedom.

And in the process destroying the very reason our Nation was created.

And it is not just the avowed anti-gun socialists, but rather backstabbing politicians, hiding behind the letter â€œRâ€ that campaigned on protecting the Constitution and the right to keep and bear arms.

Whether it is United States Senators Ted Cruz, Mitt Romney, Rick Scott, Lindsey Graham, Marco Rubio or most recently Texas Congressman Dan Crenshaw, all of these politicians campaigned on protecting the right to keep and bear arms.

But now they are all rushing to support the TAPS Act.  This act is a Red Flag of Tyranny Law on steroids.

I wrote how unconstitutional and destructive Red Flag Gun Confiscation laws in the Bull Elephant a while back.Â  And now the TAPS Act would encourage law enforcement to give EVERYONE a personal threat assessment (adults and children) and single out those they deem as future threats. That information would then be used as a kind of Big Brother substitute to â€œstop dangerous individuals before they can commit an act of violence.

And use your own social media to do so.

Which only makes sense, for big government â€˜republicansâ€™ hate the 4th Amendment.  Doubt me? See the so called â€˜Patriot Act.â€™

Liberty and freedom, as fought for and died for by American Patriots, now hangs by a thread.

And I am going to be dead serious here when I say that colonists under King George III had far more freedom and liberty than we will have if the TAPS Act scheme is passed.

In their race for electoral victory, politicians have turned Americans against fellow Americans for decades, creating the situation we have today…. a move to total and complete authoritarian government.

Do not fall for the rhetoric, demagoguery or thirty second sound bites.

The TAPS Act, HR 838, destroys virtually half of the bill of rights.  It allows government bureaucrats to spy on you without a warrant (see 4th Amendment) to take away your gun rights (2nd Amendment) without your day in court, due process or even you knowing about it (5th and 6th Amendments).

Or at least you will not know about it till a SWAT team kicks in your door, shoots your dog and stands on your throat at 3 am.

All of course based upon a bureaucratâ€™s assessment that you somehow, in some manner pose some threat to their big government schemes or could fit the profile of a one day possible terrorist.

Even President Trump has now voiced support for this statist, anti-liberty and clearly unconstitutional scheme.

I once wrote that more anti-gun laws would be passed under Trump than Obama, for Republican apologists will excuse almost anything he does, as long as he is in office and handing out more bread and circuses.

But right now we stand on the very edge of complete and total destruction of the rule of law and the freedoms so many died to create and defend.

It is truly in your hands, will you simply sit back and let them gut your freedom and the freedom of generations to come, or will you fight back and vocally refuse to support any politician, of any stripe, that supports this tyrannical effort?

Liberty could die to thunderous applause unless you act.

Is your liberty and the freedom of your children, their children and future generations worth an hour or two of your day, every day?

If so, you need to sit down and call the office of every Republican in the House and Senate, vowing to donate to ANY opponent they have in 2020, regardless of party, if they support the TAPS Act.

Worldwide people are fighting and dying for the freedoms you have hereâ€¦ all you have to do is pick up a phone and call.

Remember, totalitarian government can be voted in, but must be shot out.

Do you want to sentence future generations to doing so?

If not, you need to act now.