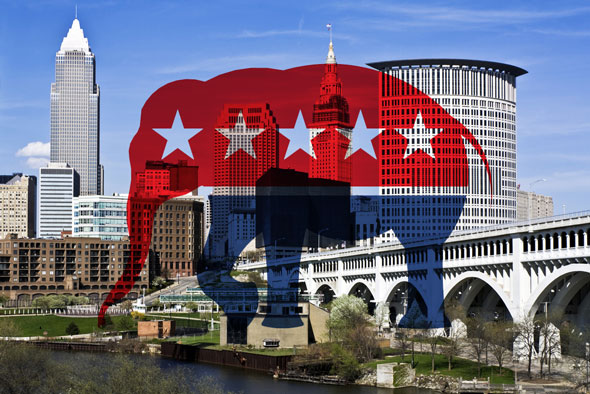 How outsiders might win the primaries, but an ‘establishment’ candidate could win the nomination

Instead, most of the convention delegates will be chosen in separate party-run processes.  Virginia’s RNC delegate selection is typical in this regard, in that it elects three delegates from each Congressional District at the respective district’s convention, and then a number of at-large delegates are elected at the state convention.  In most years, these races for national delegate are rather sleepy affairs, and often simply boil down to local popularity contests that yield a delegation composed largely of well-known party insiders and various and sundry elected officials.  This is because no matter who was elected as a delegate, their vote for president at the convention was a function of the results of the presidential primary.

This year, however, is different.  Who the delegates are actually matters in 2016.

Why?  Under RNC rules and the laws of each state, the state’s delegation is bound to vote in accordance with the results of their respective primaries/caucuses. However, that binding effect is only for the first ballot.  This year, for the first time in the modern era, we have a pretty decent chance of having a contested convention.  That is, a convention where the nominee doesn’t have a majority of delegate votes on the first ballot.  Instead, we face a situation where multiple rounds of balloting could decide the eventual nominee, and where the delegates then get to vote for the candidate of their own preference.

Thus, the preferences and politics of national delegate candidates should matter a great deal to Republican voters, who will want to ensure that their preferences are properly represented not just in the first round of voting, but in subsequent rounds where the large field of candidates will be engaged in very intense and direct attempts at persuading delegates to back them (or an allied candidate) for the nomination.

Unsurprisingly, RNC members and others who manage to get themselves elected as delegates typically tend toward “establishment” sympathies, and cannot be expected to carry the same sentiments as the large majority of Republicans upset with the old order (Virginia’s own Morton Blackwell being a quite notable exception).  In fact, this is what is keeping some of the more establishment-type candidates afloat in this race.

You see, candidates like Jeb Bush and John Kasich know they won’t win outright, but with the looming potential for Donald Trump to take a large plurality of the first round votes—but not a majority—they are positioning themselves to be the candidate who can unify enough of the rest of the party to consolidate an anti-Trump, anti-Cruz majority at the convention.  As Real Clear Politics wrote about this month’s RNC winter meeting in Charleston:

Say, for example, John Kasich stays in the race through Ohio’s March 15 primary. As governor, Kasich is likely to win his home state and its winner-take-all 66 delegates. He’s also polling above 10 percent in New Hampshire, which is the threshold to win some delegates there in its proportional allotment system. Several other states have proportional primaries (with various thresholds to actually win delegates), giving Kasich several opportunities to pick up delegates here and there. Theoretically, he could do well enough to amass 200 or so (1,237 delegates are needed to win the nomination outright).

Perhaps just as important as a delegate’s vote on their preference for president is how they’ll vote on procedural questions.  A good example of this is RNC’s Rule 40(b), which requires that for a candidate’s name to be placed into nomination, that candidate must have secured a majority of first ballot (i.e., mostly bound) delegates from 8 or more states.  This controversial rule was instituted in 2012 to muzzle Ron Paul at that year’s convention, and to grease the skids for the renomination of what supporters hoped would be an incumbent President Romney in 2016.

However, with a fractured field of candidates this year, and the potential that maybe not more than one or two candidates could have their names placed into nomination as a result, Rule 40(b) could have disastrous effect.  There are efforts afoot to change the rule, but ultimately only the convention delegates themselves can make the final call on that.  If a majority of the delegates sense a need to somehow shut out Trump (or Cruz, or even Rubio), manipulation of the rules becomes an easy way to do that.

Thus, who we elect as national delegates at our district and state conventions really matters more than it ever has before.

So what can you do about it?  Republican voters who want a voice in that process must pay attention to when their local mass meetings are held.  Those mass meetings are the bodies that elect delegates to the state and district conventions, who in turn elect delegates to the national convention.  Get involved: run for state and district delegate, and make sure you get your paperwork filed on time.  Then show up at your mass meeting, and the district and state conventions, and vote for candidates who will carry your preferences to Cleveland.

There is literally no other way to ensure that the outcome of the Republican National Convention this year will truly reflect the will of ordinary, grassroots Republican voters.  Just do it.

How outsiders might win the primaries, but an ‘establishment’ candidate could win the nomination was last modified: January 27th, 2016 by Chad Ochocinco

Slating at it’s finest. Keep a loser candidate in the hunt with big boy money, then kill off the competition with ringer delegates. Genius!

Except for the part where no one comes out to vote for your loser candidate in the general.

Yea, why would I vote for someone who says that the unemployment recepient { who lost his job } wants to be on unemployment ? This just goes to show that they are the representives who don’t represent , that is why we are here. They are deaf , lazy , full of blame and believe that their self inflicted disability is covered under The American with Disabilities Act and allows them to import illegal labor to exploit , they are the real Americans that don’t want to work.
Last election their MO was they just want free stuff, they do go door to door { often out of touch non -residents } , bet that they will not walk up on a Construction Site with Americans working , they fear the work and the worker.
Without Trump or Cruz just how will they beat the Dems , back to the blame game we just killed of the ones with the leadership game.
What kind of ship don’t float ?
Republican Leadership Ex; Gov. McAuliffe LT Gov. Northrom and the pandering AG Herring.
Gee, thanks for that guys.

I’ve been saying this for some time now here at TBE particularity as regards the Rule 40(b) requirement that would be the trigger if a candidate (Trump for example) fails to meet it’s eight primary majority delegate win requirement. I believe it is even statistically possible to have a majority of the delegate count BUT still fail to secure the nomination given this rule. Think about that for a second. If this is the play and I believe it is along with the super delegates then a majority win delegate candidate could well be denied the nomination placing the process in a brokered situation where all the non establishment candidates will be at a severe disadvantage. If you want to burn the party down this is one sure fired way to accomplish that event and I’ve seen enough Trump Derangement Syndrome (TDS) going around in the past six months to believe that idiotic scenario is not outside the realm of possibility. This could be historic a political party committing hari kari in the middle of a heavily covered national media event.

Excellent explanation, Steve. I am keeping this on hand for continued and on-going discussions. Thanks!