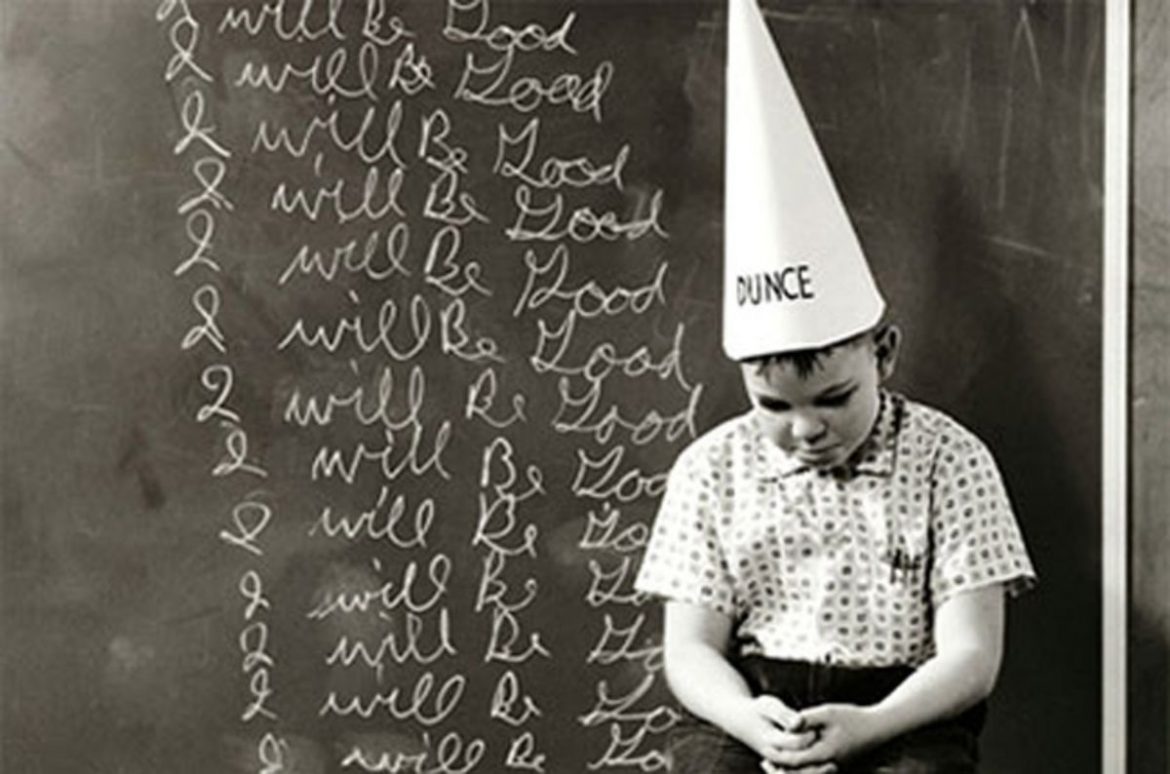 School discipline in the days before students told teachers to go f— themselves.

How Restorative Justice Is Wrecking Schools

As Virginia lawmakers brainstorm ways to prevent school shootings, recommending more funding for mental health and school resource officers, they continue to ignore the breakdown in school discipline that is causing the decline last year in Standards of Learning in schools across the state. They are fixated on hypothetical calamities while remaining oblivious to the very real disaster unfolding before our eyes.

If I’m right about what’s happening in Virginia’s public schools — school discipline is worsening under “restorative justice” disciplinary regimes, and the quality of classroom instruction is deteriorating as a direct result — SOL scores will continue to erode. And the decline will be concentrated in lower-income schools populated disproportionately by African-Americans where discipline problems are worst. White supremacists could not devise a more clever, insidious way of keeping African-Americans ignorant and poor than the social-justice regime imposed by the ACLU and the U.S. Department of Justice.

Maintaining school discipline has always been a challenge, especially as the family structure has broken down among Virginia’s lower-income groups, creating generations of neglected, defiant, and poorly supervised youths. Relying heavily upon suspensions and even arrests, the Zero Tolerance disciplinary regime that prevailed until recently may well have been harsh and arbitrary. But it did have one positive benefit — it removed the disrupters from the classroom. Teachers could get on with the job of teaching.

The new therapeutic approach may or may not be helping the bad students — there’s not enough good evidence to know — but it is definitely distracting teachers from doing their jobs. As evidence, I proffer the thoughts of a former Henrico County school teacher who blogs under her pen name, Christine S., on the Unbarbaric Yawp blog.

Christine S. loves teaching and loves her students. After quitting her job at an unidentified school to have a baby, she has no plans to return to teaching any time soon. She doesn’t think society sufficiently appreciates what teachers do, and she believes administrators and parents fail to give teachers the trust and confidence they deserve — sentiments that are commonly expressed and are no secret to the rest of the world. But her most compelling post addresses the new realities of school discipline, which have gotten very little attention. She makes several key points:

Discipline takes time. Under restorative justice protocols, more of the disciplinary burden now falls upon teachers. Instead of booting trouble-makers out of class — or school — teachers now are called upon to deal with student’s misbehavior on the spot through coaching and reasoning. She writes:

I appreciate that experts, Central Office, administration, and parents want teachers to be the first point of contact for discipline issues. Teachers SHOULD be the first point of contact, for sure! Instead of immediately writing a student a referral to the administrator, teachers should have conversations with kids, come up with a behavior contract, assign a detention of their own, or do whatever other steps they deem appropriate.

But in order to do that, teachers need TIME. When I taught, I had one 90-minute planning period every other day. I often had meetings before school, during lunch, or after school (or I was a coach and had practice after school).

I really didn’t mind calling parents or writing up behavior contracts or having a kid in my room for detention. But I needed time to do this. A planning period every day would’ve been so helpful for discipline (and other things, of course). Or teacher workdays that are ACTUALLY teacher workdays (teachers nowadays have so much professional development and few actual workdays, which many who are not in education don’t realize).

And one reason that sometimes my discipline wasn’t followed through, on MY part as the teacher, is because I simply did.not.have.time. I guess I could’ve made time — at the expense of grading assessments, making copies, tutoring, sponsoring clubs, coaching…

Teachers spend 80% of their time on 20% of the students. Writes Christine S.: “This is the most frustrating part of discipline issues for me: I literally spent the majority of my time addressing the same handful of students all year long.”

They have a right to an education, but at the expense of all of my other kids? I don’t think so. But as a teacher, sometimes my hands are tied. The system is flawed. The disruptive student who is making poor choices gets to stay in class, and no matter what I try or who talks to him or how many behavior plans we go over or how many times I call home, the student’s behavior doesn’t change, and class is ruined for 25 kids who actually want to learn.

We excuse their behaviors.
We have low expectations for them.
We, as the adults, are permissive.
We make empty threats and don’t follow through.

And now to the bottom line: Lower suspension and expulsion numbers don’t mean kids are behaving better. People point to the declining number of suspensions as evidence that restorative justice is working. But the numbers don’t necessarily mean schools are any safer or students are behaving any better, writes Christine S.

It may mean that a) teachers aren’t writing referrals and are perhaps being more permissive or b) administrators are assigning other consequences (such as a verbal warning or a lunch detention) instead of a suspension.

While she doesn’t advocate increasing suspensions, she says we should not deceive ourselves about what’s happening in the classroom.

One reason people don’t like when students are suspended is because it means they’re missing instructional time. I agree with that. … I do want to clarify, though: just because the kid isn’t suspended doesn’t necessarily mean that kid is in class learning. The kid might be present at school but skipping. The kid might be present at school in class but sitting on his/her phone the whole time or not doing any work. So, we cannot make the assumption that JUST because a kid isn’t suspended means he/she is sitting in class studiously completing assignments.

Add it up: Teachers, required to spend more time counseling troublemakers, spend less time teaching.  It is questionable whether the troublemakers are getting any real benefit. But there’s no escaping the reality that students who do want to learn are getting less instruction. Under pressure to show improving numbers, administrators conceal the breakdown in discipline. The only hard evidence of what’s happening in classrooms comes from the SOLs. When school systems are in deep denial, there is zero prospect that conditions will improve. To the contrary, as even the most idealistic teachers get fed up, turnover will get worse, infighting and gamesmanship will intensify, and conditions will continue to deteriorate.

Virginia ceded school disciplinary policy to the ideologues at the ACLU and Department of Justice, and now poor, African-American kids are paying the price.