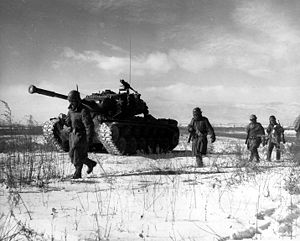 How the Party of War Turned Peacenik

If you attended school in the last three decades, you might not know that Democrats were once the Party of War. You probably think that:

You might have no idea that Democratic administrations got us into four 20th-century wars, and actually did use the A-bomb (twice) in a war.

WWI. Woodrow Wilson was president when the Great War began (August 1914). He kept us neutral, and ran for re-election in 1916 on the slogan “He kept us out of war.” But when Germany resumed unrestricted submarine warfare in 1917 (i.e., sinking merchant ships without warning), Mr. Wilson took us to war against Germany. He had vowed that we would fight if that mode of warfare recurred. Our entry into the war on the Western Front tipped the balance against the Central Powers and allowed Britain, France, and their allies to prevail.

WWII. American voters opposed intervention in the European war Germany started in 1939, so President Franklin Roosevelt kept us out. We watched from the sidelines as Germany overran Europe and then launched a massive offensive against the Soviet Union in June 1941. FDR gave “lend-lease” aid to Britain, but was powerless to do more.

Only after the Japanese destroyed much of our Pacific fleet in a surprise air raid on Pearl Harbor (December 1941) did FDR have the political support to declare war on Japan. FDR was England’s great friend and he hated the Nazis, but he couldn’t fight Germany until Hitler declared war on us. Teamed with the Soviet Union and Britain, our enormous economic, manufacturing and military strength enabled the complete defeat of the Axis.

American and South Korean forces were poised to invade North Korea when Communist China sent 300,000 fresh troops into the war. The communists recaptured Seoul, and our outnumbered army broke out of encirclement at Chosin Reservoir and retreated to the southern part of Korea.

Korea was the first time in the 20th century when our political and military leadership differed openly on the conduct of a war. General MacArthur wanted to interdict Chinese forces north of the Yalu River, but Mr. Truman opposed it, fearing that it would provoke a general war in Asia. When the general publicly advocated using nuclear weapons on China, Mr. Truman recalled him (April 1951). Thereafter, the war devolved into a costly stalemate.

After his election (November 1952), Dwight Eisenhower exerted his influence on the Korean peace negotiations. Some historians say he threatened to use the A-bomb unless North Korea came to terms, but this was never confirmed. An armistice ending the hostilities was signed in June 1953. However, the unpleasant odor of an indecisive war lingered in the air.

Vietnam. Contrary to a popular impression held by many Americans – Richard Nixon did not get us into Vietnam. Presidents Kennedy and Lyndon Johnson did. Mr. Kennedy had been sending soldiers to assist South Vietnam’s military forces in a growing war against the Viet Cong. By late 1963 we had several thousand advisors in country.

LBJ inherited Vietnam after JFK’s death, and he used it to political advantage during the 1964 campaign. Although voter-support for Republican Senator Barry Goldwater was tepid, LBJ evidently believed he needed an ace to push him over the top. The Bay of Tonkin incident filled the bill. A North Vietnamese PT boat’s alleged attack upon an American warship off the Vietnamese coast in August 1964 was LBJ’s excuse for involving us militarily. (Investigations later cast doubt on whether the event happened at all.)

Looking warlike, LBJ defeated Mr. Goldwater with 63% of the popular vote. In March 1965 he requested 500,000 American troops to fight in Vietnam. (Listening to LBJ’s address, my colleagues and I joked that we were lucky Goldwater didn’t win, as he might have involved us in an Asian land war.) LBJ called for no formal declaration of war, nor did he worry about what the United Nations might say or whether the public supported our intervention.

On the ropes by 1968, the Viet Cong launched the Tet Offensive as a last ditch gambit to turn the war around. Although militarily disastrous for the Cong, Tet was wildly successful in political terms, sparking frantic media declarations that the war was “lost” and widespread protests across the USA. LBJ abandoned his re-election plans, and Senator Robert Kennedy campaigned as the “peace candidate” until his assassination in June. Both Republican Richard Nixon and Democrat Hubert Humphrey promised to end the war. But segregationist George Wallace carried five southern states, allowing Mr. Nixon to defeat the divided Democrats.

“Veet-namm,” (in LBJ-ese) marked several firsts for the USA. It was the first time in the 20th-century when the media were adversarial instead of a positive part of our war effort. It also marked our first experience with widespread anti-war protests. And Vietnam ended the Democratic Party’s “loyal opposition” tradition – perhaps forever.

I can testify to feeling that the country was out of control in the spring and early summer of 1968, as the murder of Senator Kennedy followed closely upon the murder of Martin Luther King, Jr. The middle-class Americans I lived among wondered what would happen next.

Mr. Nixon took four years to get us out of Vietnam, and by then he owned the war. That LBJ had gotten us into it – possibly by a ruse – was forgotten. Mr. Nixon got the peaceniks’ full ire, and Democrats became the anti-war party. 50 years on they still are. Henceforth, no war run by a Republican administration would ever be worth dying for.

After driving Richard Nixon from office, Democrats elected Jimmy Carter (a peacenik in military drag), Bill Clinton (a Hugh Heffner-wannabe who used the military for timely diversions), and Barack H. Obama (the peace-and-brotherhood closet Muslim who never met a terrorist he didn’t like). But then the anti-war strategy crashed. In 2016, Dems’ “inevitable,” 92%-certain, money-in-the bank Obama-heir, Hillary Rodham Clinton, was soundly thumped by a flamboyant, trash-talking billionaire businessman who vowed to stomp all enemies (foreign or domestic), secure our borders, get the economy moving, and “make America great again.”

Mrs. Clinton campaigned on gender-politics, race, sexual deviance, cultural secularization, retaining Obamacare, opposing parental choice in education, higher taxes, expanded welfare, open borders, citizenship for illegal immigrants, and absolutely no wars with anybody, anywhere. With the motto I am not Donald Trump, she ran the full liberal playbook. But voters rejected it, her, and the cross-party Establishment which has had control for over eighty years.

Democrats’ credibility on national security is very low, but that’s only the tip of their problem. Presidents Wilson and FDR were elected on social platforms in peacetime. Each was re-elected on promise of neutrality in a war that began on his watch, and each had the nation’s support when he later took us into war. Their domestic agendas produced public trust that extended to later military intervention. Both Truman and LBJ gained office via their predecessors’ deaths, and both found their military efforts hampered because they had not earned the public’s trust.

Today the Democrats’ domestic and foreign agenda is bankrupt. The country has rejected it. This is why Mr. Trump is president, the Congress is Republican, and the Supreme Court is tipping rightward. Dems have nothing left except tossing rhetorical grenades, blocking Mr. Trump’s agenda, and heckling Mrs. Trump for wearing high heels to a disaster-site. They have not earned the nation’s trust on domestic policy, as Wilson and FDR did. Instead, they are allied with radical elements who reject the mainstream culture’s values and want to silence its speech and “purge” its history. All this caused former Senator Zell Miller, a lifelong Democrat, and many others to say they didn’t leave the party; it left them.

Republicans are relatively new to running wars, so their experience, starting with Mr. Nixon and continuing with G. W. Bush, has been spotty. Mr. Bush had the country’s unified support after the 9/11 attacks, but he tried to make war on the cheap and drew it out far too long. History shows that Americans lose patience with wars lasting longer than four years. Mr. Obama understood this, so he won election twice on promises to stop the wars. But he failed to grasp the equally important fact that Americans really hate losing wars or just fighting to a bloody draw.

No matter how many strategy papers on national defense Dems write, how much posturing they do on foreign involvements, and how much they support “resistance” elements, they cannot win elections by opposing everything Republicans want to do, by dissing the nation’s core-culture, and by being reflexively anti-war. Until Dems figure this out, they’ll be playing second fiddle. And the way it looks now – unless Republicans completely bungle both domestic policy and national security – that could be for a very long time.

How the Party of War Turned Peacenik was last modified: September 19th, 2017 by Woody Zimmerman

With many tears I often think of those many young men who went to Iraq and did not come home to live their lives any further.
Let us never forget why we supported ***Field of Dreams***

As long as Dems control the media and academe, they can lie about almost anything. It takes those who know the truth to boldly proclaim it. By the way, Trump gave a superb speech at the UN today.

How do partisans control public companies, their equities available to all on an equal basis?

How can partisans control academia, so varied are the various players across the spectrum.

What is superb about a speech advocating purely self-interest in addressing challenged that are truly global?

Would you prefer a world where Republican controlled media and academia? Why should partisan affiliation dictate, especially when you don’t even support Republican legislators and leaders?

Would you prefer a world where others acted purely in their self-interests as regards you? I hope my neighbors take our mutual interests into account instead of acting purely on their own account. Indeed, we do, and it works. I might prefer the road we share paved, but I respect their desire for the alternative simply because I’d rather be a good neighbor than a self-interested ass.

Likewise, while the monuments mean little to me, I accept that others have an interest in their preservation, and so I defend their right to preserve them if they are in the majority.

You are free in this country to boldly proclaim all the lies you wish. I believe in truth, justice and the American way.

Instead of offering reason, you offer platitudes. Shall we argue on your level?

No, no, Warmac, it is me that believes in truth, justice and the American way!

In addition, I believe in open markets and diversity in education.