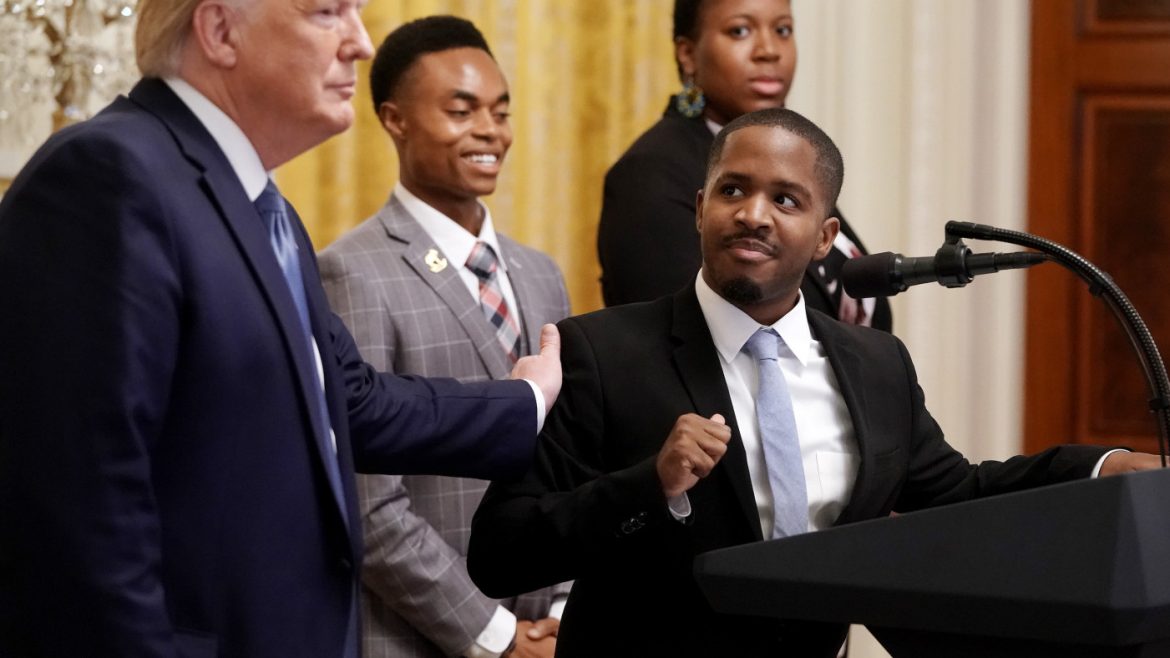 Trump with the Young Black Leadership Summit in the East Room of the White House (photo credit: Chip Somodevilla/Getty)

How the Virginia GOP Should Be Doing Outreach

In the aftermath of the debacle in November, Roanoke County GOP Chair Dan Webb sent out an email, talking about several things we must do to regain the majority in Richmond.  One thing mentioned in Danâ€™s email was talk about talking to voters who we normally donâ€™t talk to. Dan is onto something, and I want to expand on this subject a bit.

For years, National Republicans and Virginia Republicans have done minority outreach by designating â€œminority outreach officersâ€.  Aka finding an African American person to go to predominantly black churches and talk to black voters. The same with talking to Latino voters.  The GOP would find a prominent Hispanic Republican and have that person go out to talk to Latinoâ€™s about why the GOP is the better party.

While well intentioned, these efforts have not done much to bring minority voters into our fold.

Several years ago, on his Fox News Show, Sean Hannity was interviewing former Congressman Allan West of Florida.  West, a prominent conservative at the time who was also African American, was having an interesting and telling dialogue with Hannity about how African Americans vote.  Hannity was asking West why donâ€™t blacks vote Republican, and West simply stated â€œRepublicans donâ€™t show up to black voters eventsâ€. Hannity replied â€œYes we doâ€. And West replied back rather tersely â€œNo the party doesnâ€™tâ€.   Hannity shrugged off Westâ€™s comments as if Lt. Colonel West was out of his gourd on this issue.

Like it or not, Allan West was correct then and remains correct now.  Republicans maybe show up once a year at an event where African American voters are going to be the majority in attendance, and then we leave them along the other 364 days of the year.  Most black voters do not think along the lines of racial issues â€“ and do not see Republicans as racists naturally â€“ but when only Democrats show up â€“ what else will black voters think?

Another problem with this approach is a simple fact about the science of how voters vote.  Voters do not vote as much based on issues as they do based on their feelings about the candidates running.  Meaning that people often vote based on who they trust, or who they like. So if a voter does not have an emotional relationship with a candidate for office, they are less likely to vote for that candidate.   So while sending an â€œoutreach officialâ€ may sound good on paper, in fact it does little good in reality because voters like to have an emotional attachment to their elected officials.

Vance Wilkins and Ginger Burg in Amherst County are perfect examples of how we should be doing and are proof positive that this type of outreach is the model that Republicans should be using.Â  Vance Wilkins is the Amherst County GOP Chair, and Ginger Burg is the Vice Chair and was this past year a School Board candidate. Because Ginger knows our history and knows that it was the Republican Party that freed the slaves and fought for slaves to have the right to vote â€“ Ginger joined the NAACP sometime ago.Â  So when Ginger announced her run for School Board in Amherst, she already had the support of the Republican party, but also had an effective tool in having done good outreach to black voters. Ginger is also a proponent of conservative improvements to education (i.e. vouchers and charter schools), something near and dear to every African American family.Â  The end result is that Ginger Burg, a relative newcomer to Republican politics in Amherst County, won her School Board race against the education establishment with a large helping of support (40% plus) from the African American community. The results are plain as day. In the Wright Shop precinct â€“ which is heavily African American â€“ Ginger Burg fought the liberal education establishment candidate to a tie.Â  263-263.Â Â

Not to be outdone, Vance Wilkins the former Speaker of the House of Delegates, has been reaching out to black voters in Amherst, and now the Amherst GOP has a significant African American representation on the County Party.   If you ever want to see a true Rainbow Coalition go to an Amherst County GOP meeting. People like Vance and Ginger who do the work required are the biggest threats to Democratic dominance in Virginia.

This is the type of outreach we should be doing.  Instead of each Unit or District Committee appointing someone to do their outreach, the individual Unit Chairs and candidates themselves should be doing the outreach.  It is hard work â€“ but is work which must be done.

We must also accept the fact that we need more Latinos and African Americans and other minorities as both candidates and as party leaders.Â  Waynesboro Chair Ken Adams has been tireless in his efforts to bring and promote African Americans as party leaders in Waynesboro and the surrounding areas. Â  And the first thing that Ken Adams will say is that he recruits people regardless of ethnicity, but because of their ability. These are how we must be applying conservative principles.Â  And his being 100% color blind brings in minority candidates for party office.Â Â

This is a long term plan.Â  And things will not happen overnight.Â  Former Congressman Bob Goodlatte needed a decade plus to get support from the African American community in Roanoke, but he was persistent, and he finally won them over.Â  We need to do the same. This must be a long term plan. Just trying to do this for a month or two will not work. To get Latino/Asian/Indian/African American voters to trust us will take years â€“ but will the payoff be worth it?Â  Donâ€™t ask me, ask School Board Member Elect Ginger Burg herself.Â Â

How the Virginia GOP Should Be Doing Outreach was last modified: December 17th, 2019 by John Massoud