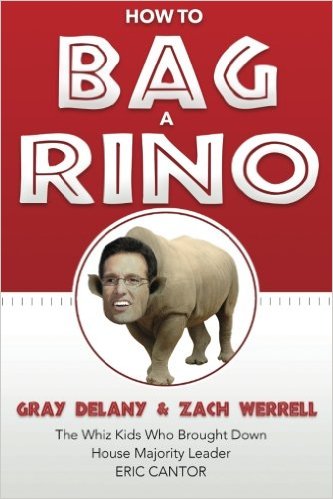 How to Bag a Rino: A Book Review

Gray Delany and Zach Werrell are household names to activists in and around Virginiaâ€™s now infamous 7th District. Once again, these two young gunslingers have teamed up to write an account of the campaign that shocked a nation, humbled the Washington Elite, and inspired grassroots activists from Hanover, Virginia, across every county and district within this United States of America. It was their campaign that energized an entire nation of grassroots activists to pressure their representatives, as if even the most sacrosanct amongst them were no longer invincible, for change. Today, not only have we seen the defeat of House Majority Leader Eric Cantor at the hands of Dave Brat, but weâ€™ve seen the surrender of Speaker of the House John Boehner at the hands of a nation.

How to Bag a Rino, by Gray Delany and Zach Werrell

Their story does not begin with a brilliant idea and a full proof plan. If you are expecting a secret formula, innovative fundraising ideas, or a genius way to start from nothing and start strong, then you donâ€™t know the story of Dave Bratâ€™s bid to challenge the seat of the third most powerful Republican in Washington D.C. This is a story of will, not genius.

John Grisham, eat your heart out.

Now a Congressman, Economics Professor at Randolph Macon, Dave Brat, is everything conservative and libertarian activists have been asking for. This campaign could not have been fought with just anyone. After reading this book, I realize that you need more than just principle and philosophy, you need to be qualified. Dave Brat was qualified.

Furthermore, if you are living in a district, and hoping for change, but you have no network of patriotic and committed grassroots activistsâ€¦ forget it. None of this would have happened without them. If you want to know what it takes, as citizens in a district, to create change, real change, then you need to read this book and understand how instrumental the average citizen is in bagging a RINO.

Finally, the third component, and the reason why these two young twenty-somethings are able to write this book â€“ you need simplicity itself: truth. You need to tell the truth about your current representative. You need to tell the truth that has been denied to the people living under establishment rule and rhetoric. Make them defend the truth, because the Eric Cantorâ€™s and John McCainâ€™s and John Boehnerâ€™s cannot defend themselves in the light of reality.

So if you find yourself in Arizona, Arkansas, Ohio, or Illinois, and youâ€™re wanting to Bag a RINO of your own, you need to read this book. Youâ€™ve got to find a qualified candidate â€“ of course thatâ€™s important. However, years before you do that you need to build an army of activists, who understand the inner workings of the Republican Party, and who understand the importance of every angle. Then you need to use those activists and that qualified candidate to run on philosophical and realistic principles and policies, in order to create the contrast you already know to exist.

For those of us who simply served as satellites around Dave Bratâ€™s campaign, blowing on the embers of a fire that would rise to the attention of the national media, weâ€™ll never forget the moments that lead to the victory. Virginia Right! was there. We believed. In fact, Tom White called the election, days before the first vote was counted. I even promised that the 7th District would send Dave Brat to Congress. Why? Because I met the men and women of the 7th District and I met Dave Brat. I know greatness when it talks to me. I am an admirer of so many people that Iâ€™ve met, that were it not for this book, I would never have known how instrumental they were in the greatest political victory in modern times.

But let me say this â€“ because this is the most important thing â€“ if you really want to Bag a RINO, youâ€™ve got to find a qualified candidate. Dave Brat didnâ€™t just defeat Eric Cantor. He has demonstrated himself to be the most principled Republican in Congress. Youâ€™ve seen him on FOX News, youâ€™ve seen him on CSPAN, and youâ€™ve probably seen him or read about him everywhere else. Why?

Unlike all these â€œTEA Partyâ€ candidates we elected to the House and to the Senate that joined the establishment, accepted the money, and became willing pawns in the corruption which is our Federal Government, Dave Brat, Congressman Dave Brat, has not wavered.

This book could not have been written, but for the fact that Congressman Dave Brat has not been a disappointment. The intelligence and character and understanding of economic and political philosophy that made Dave Brat the candidate that inspired me to start writing publicly again, are the same characteristics that made him the right David to defeat Goliath.

So tonight, not tomorrow, (or if you are reading this tomorrow, then today, not Thursday), pre-order How To Bag a RINO: The Whiz Kids Who Brought Down House Majority Leader Eric Cantor. Learn the importance of truth in politicking.

How to Bag a Rino: A Book Review was last modified: October 6th, 2015 by Steven Brodie Tucker

If Trump added Zach Werrell { from Brat } and Even Feinman { from McAuliffe } to his Virginia Staff he would carry Virginia with astounding numbers.

A very nice article, Steven. I live in the 7th District and I was one of those activists. I met Dave when he made his first announcement in Louisa County. I was sold on him immediately and I knew I would do anything I could to help him get elected. The last time I felt that strongly it was Ronald Regean. I am a member of the Republican Committee, the Fredericksburg, Virginia Patriots, the Oath Keepers and a number of other organizations. I can tell you that Dave has unbelievable support from the grass roots. There are some more good candidates that are beginning to move up the ranks and that gives me hope. We have David Ross who is the encumbent supervisor running for the Courtland District. He is actually in the 1st Congressional District and I would like him to move into Witman’s seat should it become open. Having the two Dave’s in congress would be fantastic.
David Jackson

I have been privileged to hear COngressman Brat speak to small audiences several times since his election and want to express my heartfelt thanks to all those who worked with such perseverence and smarts to get him elected.

I hate to be a nit picker, but I do not like the term RINO and never use it. The unpleasant reality is that we have only two viable parties in America, which means that each party must accommodate a boatload of varying views. I am old enough to remember when there was a huge segment of the Republican Party that was moderate, consisting of Rockefeller, Scranton, Romney (Michigan), Ford, Eisenhower, Michel, Dole, and Baker. While these folks were undeniably not conservative, they were nonetheless Republican. I prefer to use the term Establishment Republicans.

I’m with you, Mark, in disfavoring the term’s usage. BUT, I do believe the term can be used to describe particular isolated cases accurately. Cantor clearly was not one of those, but there have been recent members of the Virginia Senate that have been quite literally Republicans in name only.

I always think of the think of the Richmond political scene as every day is Halloween and you can dress yourself up as what every you want and no one will ever criticize the costume or character portrayal. It’s all just good clean fun except for perhaps the taxpayer who generally don’t have a clue what anyone stands for.

Cantor is not a RINO? Seriously? I guess Brat shouldn’t have beat him then, right? A guy who goes off to a lobbyist job (like some of your best good buddies at Bearing Drift) is not a RINO? Lobbyist see Steve, make money from their connections to the government. That means government spending Steve. You are NOT a small government conservative if you like to feed at the government pig stall.

Cantor is the epitome of a RINO. A RINO is someone who will sell out conservatives so he can personally gain from his job as a politician. They have no principles except that they want to be rich.

Mark — and I can’t imagine any of those “moderates” you mention simply standing by for any president — even of their own party — raping the Constitution as we’ve seen in the last 7 years. Look at all their records and none of them were so feckless as to try to escape their duty to protect our Republic; they had a deep respect for our founding principles and documents and the courage to act on their convictions.

I used to think like that, I didn’t like the term RINO either, but I’ve learned to like it. The reason is that I don’t believe that the establishment Republicans are moderate – I used to, but now I don’t. 14 trillion in debt … oh wait, its 18 trillion now, unlimited QE, zero interest rates forever, raising taxes in Virginia with the transportation tax, etc … these are not moderate positions, these are extreme positions. Yes, maybe RINO’s and the establishment are moderate in the sense that they will vote Democratic, but they aren’t moderate in the common sense meaning of that word; they’re wreckless, and history will ultimately reveal just how wreckless.

There were many GREAT grassroots patriots that worked day and night on this campaign and not all of the from the seventh.There were a few of us from other districts that knew Eric cantor had to go and prayed for God to send us a great man and HE did! Then we were faithful and worked day and night to assure victory. Only prayer and belief in God can save America.

I wasn’t involved in the campaign beyond sending Dave Brat a donation, but I got the impression Cantor’s arrogance and detachment from his own constituents played a big part in his fall? Correct me if I’m wrong.

The reason I ask is I’ve noticed the lesson several Congressmen seemed to have learned is not necessarily to vote more conservative, but to get out in public and have your picture taken at every elementary school function and Girl Scout meeting and low-information-voter gathering and then lie, lie, lie about what you are doing in Washington.

As one of the activist volunteers who devoted many hours to getting Dave elected, it is heartening to know that Dave Brat stands firm in his beliefs. He is truly a citizen legislator who, unlike his predecessor, remembers who he represents.