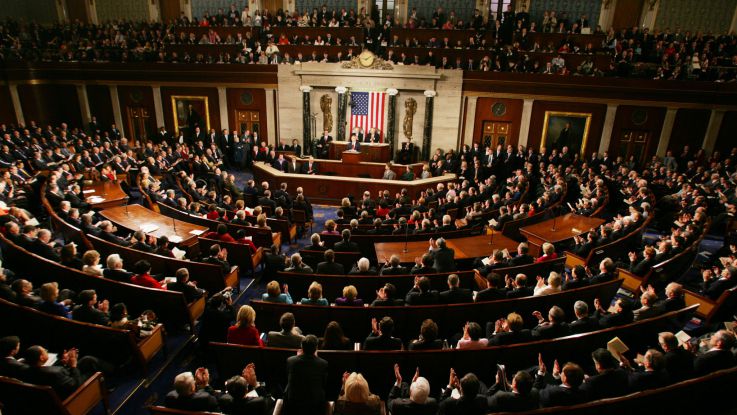 How We All Forgot About Congress

So there I was, listening to Sean Hannity on my drive home from work, hearing him tell his listeners that Donald Trump would change everything, that he’d blow up the bureaucracy, he’d reshape the system, and we’d all be witness to day after day of positive, invigorating hope and change. Sean Hannity is no neophyte, but he appears to have suspended everything he knows and bought into the “hope and change” promises of yet another candidate, without questioning how his candidate would get anything accomplished.

A President can do none of these things, but they are forced to promise that they will do these things in order to grab the attention and support of the Republican voter who, let’s be honest, doesn’t have the slightest idea how government works. Sean Hannity, however, does know how all this works and he sounds like a complete idiot talking about how we need a President who will destroy the system. Presidents can’t destroy systems unless they are given imperial powers to do so. I would hope that Mr. Hannity is not advocating for anything so extreme. Unfortunately, I think Hannity might be the first national republican voice to admit that maybe that’s just what we need and maybe Trump is just the right Caesar for the job.

Before Super Tuesday, we should begin a conversation about what these Republican Candidates can actually accomplish. A Rubio supporter whom I greatly respect has pointed out that Senator Cruz has a terrible relationship with the United States Senate and would have a difficult time pushing through his agenda. This is a fair point, however President Reagan faced similar obstacles and came out on top (though he did cut some pretty awful deals to get that agenda passed – a fact we often like to forget).

On this issue, I think Donald Trump gets it. Trump has promised to make deals with whomever is running Congress and has argued that he’d be the best candidate for making those deals. This is both true and troublesome, since Trump (who is neither a conservative nor a constitutionalist) will likely give away much more than any honest conservative could stomach in order to get his bills passed.

Governor Kasich has the best understanding of any of the candidates with regard to getting bills passed through Congress, but he’s also on the wrong side of so many important issues that I’m not sure anyone right of center wants to unleash a President Kasich on the United States Congress. Would we not end up, essentially, watching the same thing happen that we witnessed with President George W. Bush?

Would a Donald Trump or a Marco Rubio or a John Kasich veto popular Republican Legislation in order to prevent burdening future generations with seemingly unlimited debt? Probably not. Ted Cruz would. This is the difference between Senator Cruz and all the other candidates. President Cruz would stand up to a Republican Congress. This is exactly what supporters of Rubio and Kasich despise about Senator Cruz, and so it serves as an excellent line of demarcation with respect to the factional constituencies within the Republican Party.

We cannot forget about Congress. Now, the reason why we’ve all forgotten about Congress is because this Republican Congress has done next to nothing over the last year and half. The House of Representatives has fully funded every major Obama program since taking power in 2010. So it’s easy to overlook Congress, but do not doubt that whether we have a Republican or Democrat President in 2017, they will have to contend with a fiscally irresponsible and serially corrupt United States Congress.

Kasich and Rubio will probably put through whatever Congress sends them. Trump will cut deal after deal after deal. Senator Ted Cruz is the only one I trust to have the courage to fight a Republican Congress. Now, either Hannity doesn’t get it or he doesn’t care, but his love affair with this fantasy about an outsider destroying the system is absurd. Trump isn’t Caesar and he isn’t Jesus Christ. He cannot control the government the way he controls his businesses. He cannot perform miracles.

This is the conversation we ought to have over the next seven days before we vote on March 1st. We have honest disagreements that deserve some serious attention. This is why I volunteer for Senator Ted Cruz, because I haven’t forgotten about this Republican Congress and I believe we need a President who can stand up, not only to the Democrats, but to his own party as well.

How We All Forgot About Congress was last modified: February 22nd, 2016 by Steven Brodie Tucker

Thank you, Steven for a well reasoned article. I fear that the very electable Marco Rubio might not be the tough conservative we had hoped for. The rigidity of Ted Cruz could be a blessing or a curse. As much as I abhor the emotionally incontinent Trump, there are times when I am almost willing to call his bluff, and see what kind of hell he can raise with the status quo. Just wish he would start acting like a statesman instead of a spoiled schoolyard bully.

If hasn’t grown up from the schoolyard now, he’s not going to do it in the future.

Obama has done plenty w/out Congress, so basically another babbling article on why people shouldn’t vote for Trump. The GOP gave us Trump, deal with it.

Babbling? Then try this.

Sorry, I don’t read anything from the Blaze.

Obama has done a great deal of damage to this country: 1. with the help of Congress (i.e. they’ve funded everything Obama asked for) 2. Through the unconstitutional use of executive orders. Now, I think there is good reason to believe that Donald Trump won’t provide us much of a difference when it comes to abuse of power. So yes, just another article articulating why people shouldn’t vote for Trump.

Well said. Have you read Trump’s books? That’ll give you even more reason to be wary of the idea of him as President. The tactics he describes using are the ones employed by shysters and crooks.

And sorry, it didn’t sway me.