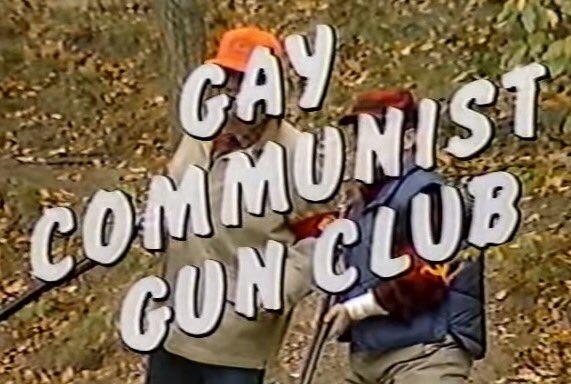 It’s hard for a political movement to succeed when it deliberately drives away would-be supporters. But that’s what self-proclaimed Libertarians often do. As a result, the Libertarian Party has grown little, and remains a fringe political party, even though it could easily have grown a lot due to the rising unpopularity of the Democratic and Republican Parties. The two most unpopular presidential nominees of modern times were Donald Trump and Hillary Clinton, yet hardly anyone votes Libertarian, despite the record-breaking unpopularity of these Democratic and Republican candidates.

Libertarian activists often behave like the exclusionary “Gay Communist Gun Club” depicted on the comedy show “Saturday Night Live.” It looked for any possible reason to turn away potential members who wanted to join, rejecting them because they didn’t prioritize all the same issues as existing members. It wasn’t enough to be a gay communist, or a gay gun nut, to join the club — you had to be gay and communist and a gun nut. And you had to prioritize those three things, not anything else.

My wife was once sympathetic to Libertarianism. In the 2012 Republican presidential primary, she, like me, voted for former Congressman Ron Paul. Paul was a libertarian who had previously run in the 1992 general election as the Libertarian presidential nominee. You could have loosely described her as a libertarian. But as libertarian activists moved leftward, and became more “woke,” she started to draw flack from them for opposing progressive causes.

For example, she said that Robert E. Lee couldn’t be canceled without setting a precedent for canceling Thomas Jefferson or George Washington, too. If statues of Robert E. Lee were removed or his name were removed from schools named after him, that would set a precedent for people to later take down statues of Washington, Jefferson, and other founding fathers. She cited Ron Paul’s argument that removing Lee would lay the foundation for removing Jefferson, too.

In response, woke self-described “libertarians” told her that it was absurd to argue that removing statues of Robert E. Lee would lead to Washington and Jefferson being removed as well.  They said she was a “doughface libertarian” and dumb “Paultard” to argue against removing statutes of Robert E. Lee — even though my wife has no confederate sympathies and is an immigrant, not a descendant of slaveholders. (Left-libertarians refer to supporters of Ron Paul as “Paultards,” and disparage them for not prioritizing causes like open borders and unlimited immigration).

But history has proven my wife right. Local governments are now removing the names of founding fathers like George Washington, Thomas Jefferson, and George Mason from schools, and removing their statutes, too. After removing statutes of Robert E. Lee, progressives moved on to canceling other historical figures. Left-wing activists tore down statues of Thomas Jefferson and George Washington in places like Portland.

And they didn’t stop there. BLM protesters even tore down the statue of Ulysses S. Grant in San Francisco. Grant is the general who did the most to defeat the Confederacy in the Civil War. Later, as president, he appointed black people and American Indians to office and tried to protect blacks against racist violence in the South, even though keeping troops in the South to protect blacks was costly and unpopular in the North. Grant’s contributions to black freedom were so great that he was celebrated by the black abolitionist Frederick Douglass. “To him, more than to any other man, the Negro owes his enfranchisement,” Douglass said. Douglass eulogized Grant as “a man too broad for prejudice, too humane to despise the humblest, too great to be small at any point. In him the Negro found a protector, the Indian a friend, a vanquished foe a brother, an imperiled nation a savior.” But Grant briefly owned a slave he inherited from someone else, before freeing that slave, making him taboo to progressives.

Being insulted by woke “libertarians” did not persuade my wife, but it may have pushed her to the right, politically. Over time, my wife got more conservative. She voted for Trump in both the 2016 and 2020 elections. Woke “libertarians” may have influenced my wife — but not in the way they intended.

Ron Paul brought many people into the Libertarian movement in the 1970s through the 1990s. My wife appreciated the fact that he opposed pointless foreign wars, wasteful government spending, the war on drugs, and politically-correct speech restrictions. Unlike other libertarian-leaning politicians, he managed to get elected to Congress, over and over again.

But Paul ran for Congress as a Republican and didn’t prioritize open borders. As a result, he wasn’t “woke” enough for many of today’s young “libertarian” activists, who despise Ron Paul for not being politically correct. As one of them put it, “Ron Paul brought libertarians a wave of racist dingbats who like liberty in only a few areas, from which we are still digging ourselves out. Good the fuck riddance.”

Due to libertarianism’s drift leftwards, people like my wife voted Republican in 2016, giving Trump a narrow victory over Hillary Clinton. This wasn’t the result the wokester “libertarians” wanted, but it was the result they got.