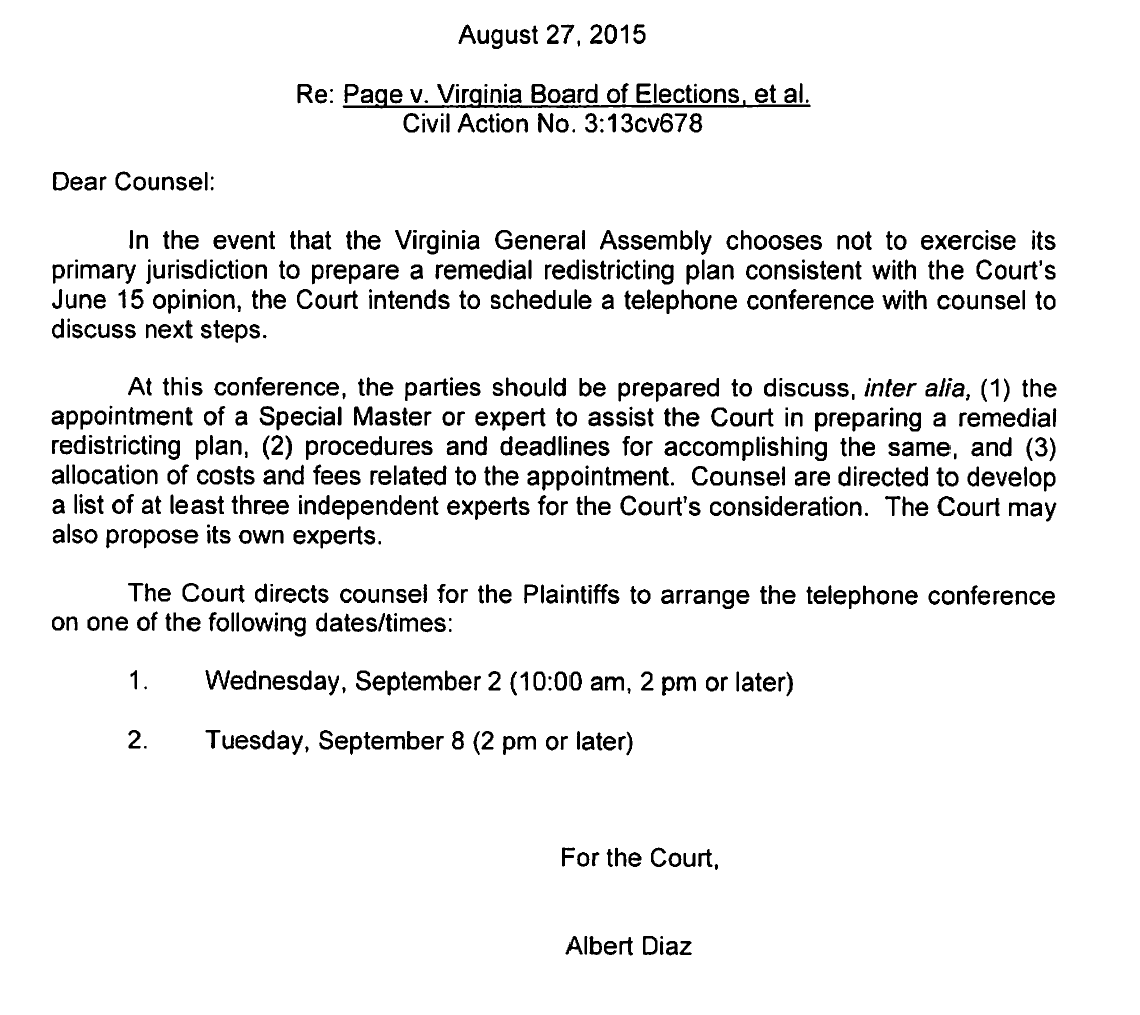 With minor changes, Scott Rigell, Randy Forbes, David Brat, and Barbara Comstock will all be vulnerable.  Those who believe that there is a secret plan for Republican leadership to act upon, and they are actually evil geniuses, are wrong.

Here is the Republican General Assembly’s plan in a nutshell:

Here is the alternate version (reality):

I call this second version the magical fairies plan.  I tell clients about this type of thinking so they can avoid it and make reasoned calculated decisions based on the facts, the law, judicial temperaments, and the client’s risk tolerance level.

In politics, perception is reality.  All that really matters at the end of the day is what the voters think.  It’s crass and demeaning.  It makes politics a business of feeding the masses a narrative (true or untrue) in order to gain their support.

The three Judge panel does not care (that much) about press releases, or hurt feelings, or political one-upmanship.  The three Judges assigned to this case have been appointed for life.  For good or for ill, they are largely insulated from the political process once in office.  This is not politics.

There is no serious General Assembly action.  Republicans have control of the Virginia House and Senate.  They could be pushing through new Congressional Districts and new House (and Senate Districts).  Yet, all I have ever heard from the Republican members of the General Assembly on this issue is that “we can’t pass anything because McAuliffe will veto it,” and “we are confident in and must win the appeal.”  The federal courts will end up redistricting for us if we lose!!!!  No serious redistricting has even been proposed. Not good enough.

The House is still in session, and can introduce and pass a redistricting plan from the House alone.  Do not walk into Court empty handed.  You have buried yourselves, and one or more Congressional Republicans through inaction.  No matter how badly tricked you were by the Democrats on August 17, the failure, up until now, rests with you.  Quit whining about Democrats violating rules, and denied extensions from the Court, and DO SOMETHING!

*Finally, the advice I hope House Republicans don’t take: that they should “introduce and pass a redistricting plan from the House alone,” just don’t “walk into Court empty handed” no matter what. Which, of course, as a diehard Democrat, is exactly what I hope Republicans do. 🙂

A House-backed map that addresses the panel’s concerns could even be enough for the judges to adopt is as their own and call it a day. At the very least, the panel is more likely to tweak what the House does than go back to square one.

And the acknowledgement of failure:

By giving the court no alternative, the House seems to give state Sen. Don McEachin’s dream of entirely redrawing the congressional districts a chance of fulfillment.

Will the court completely redraw the lines? We don’t know. And I certainly hope not. But the House has certainly given them no alternative.

So perhaps I am STILL wrong…

Make no mistake the three Judge panel feels the General assembly “chose” not to exercise jurisdiction.  When one “chooses” not to participate in the decision making process it is unusual for that entity to then be given much credence in the further decisions of the court.

In politics perception is reality.  Before the three judge panel, we are no longer practicing politics.

Rigell, Forbes, Brat, and Comstock are in potential danger in 2016, and Republican leaders in the General Assembly are relying on magical fairies to protect the 2011 Congressional redistricting plan.

Apparently, Republican leaders in the General Assembly continue to fight the war of perception. 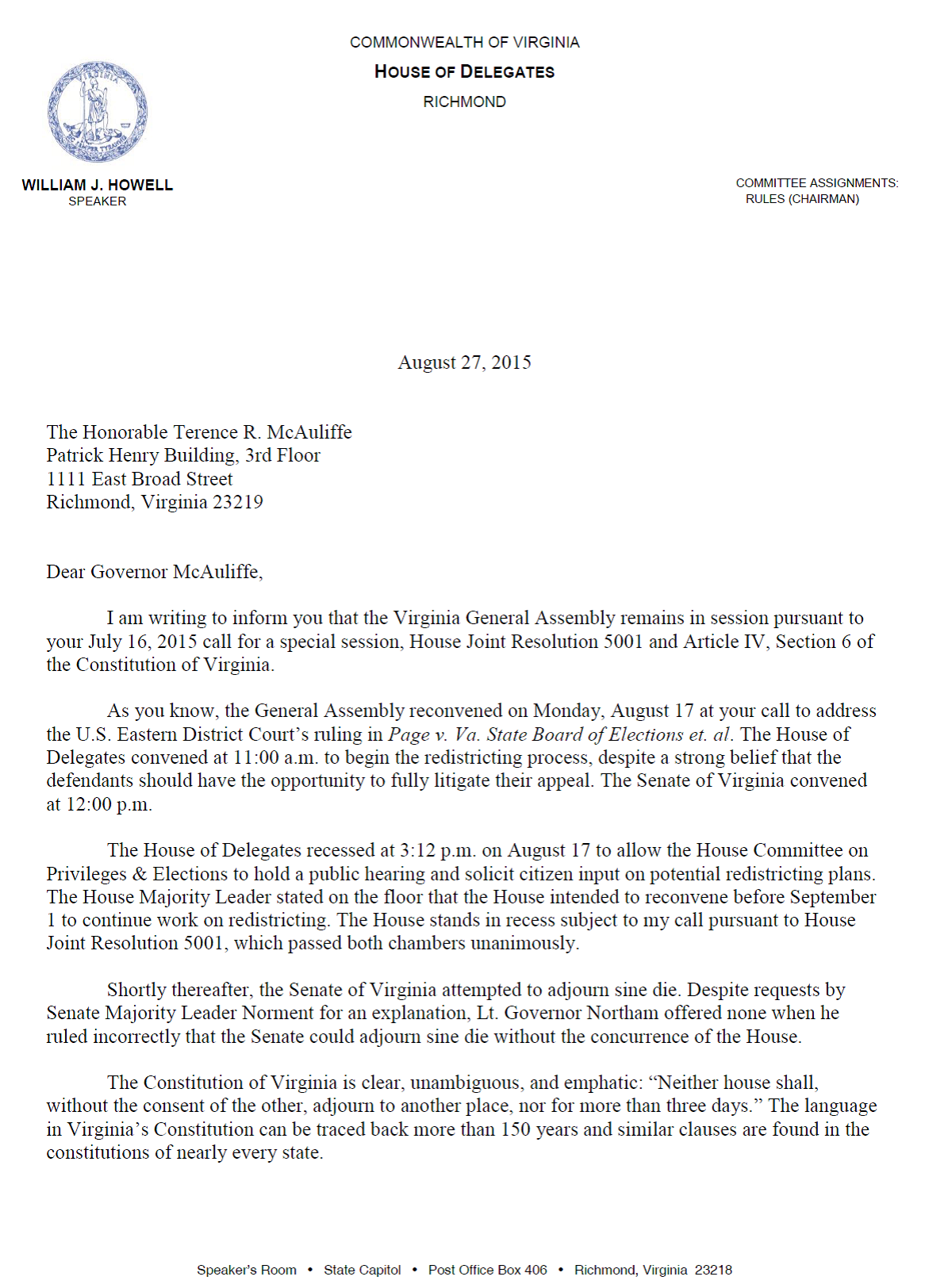 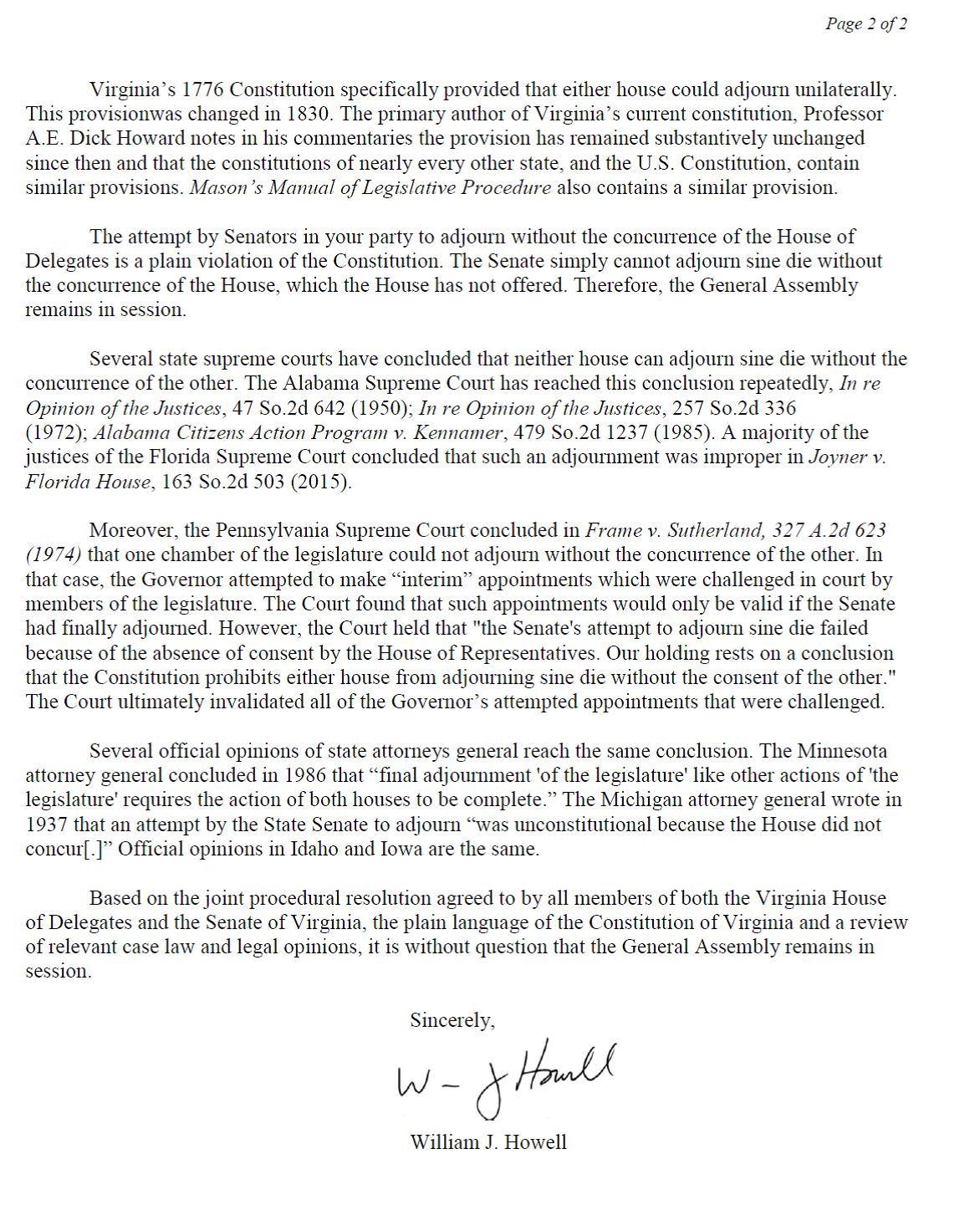 The redistricting plans Hillary's lawyers don't want you to see - The Bull Elephant September 22, 2015 at 6:54 pm

[…] in response to the court’s invitation for interested persons to submit them.  As TBE readers may recall, the court issued this order after the General Assembly failed to pass a redistricting plan as […]

[…] Due to the tendency of our General Assembly to ignore Court injunctions to engage in Congressional …, the Court is truly taking over the redistricting process. […]

I can’t tell if you are joking about Howell/Norment trying to unseat them or if you are being serious. Clearly their actions are screwing them over, but I seriously doubt they are taking those actions without the approval of said members of Congress. If the GOP Congressmembers wanted the map re-drawn I see no reason that it would not have happened already.

Paul did not intend for the headline to be taken literally. My gut instinct tells me the Republican representatives didn’t sign off on the plan to do nothing. I guess we won’t know for certain unless Speaker Howell explains what his philosophy is on rolling the dice with the court.

If they didn’t sign off on it, then their power over their GA delegation is nill and I’m just not seeing that. Rigell alone should have heavy hitters in his pocket to have made this happen if that’s what he wanted. Or maybe Rigell did want it to happen and the rest didn’t. He’s strong enough to survive any change in district that could come his way. Forbes and Brat, not so much at all. Comstock, definitely. Either way, none of this makes sense.

Please note the irony of Democrats
screaming about racial gerrymandering in contrast with Bobby Scott’s aspiration that the 4th Circuit will create a second district where “minority preferred” (his words) candidates will be elected. “Scott says redistricting could give Virginia a second black representative.” http://www.dailypress.com/news/politics/dp-nws-scott-redistricting-20150901-story.html

OK, the law says you do the adjustment NARROWLY with adjacent districts. The 10th (Comstock) is nowhere NEAR an adjacent district…..and Speaker Howell, who endorsed Congresswoman Comstock EARLY in ’14 and contributed over $250,000 to her in 2013, is now trying to do her in…and the others….Sure, “our team” is full of “morons”. Maybe it’s just the the recent folks to politics who have issues. Please stop.

Dear PJ, please provide a reference to the “law” that “says you do the adjustment NARROWLY with adjacent districts.” Statutes, constitutional provisions, case law, and even regulations are acceptable. At that point we can engage in a real discussion.

The rest of your comment is misdirected anger and/or a misunderstanding of what I wrote, therefore I do not intend to address it.

Except the rest of the post is relevant… You can hide behind your arrogant assumption that us uneducated peasants can’t comprehend the sophisticated ideas you’ve posted on this internet blog, but there’s not much room for interpretation when, in the title, you claim there is a conspiracy in the leadership to unseat several Republican congressmen. The last commenter pointed out that that action would essentially be the same as Bill Howell mortgaging a house and then immediately burning it.

Your refusal to address that credible fact is either cowardice and/or ignorance, therefore I don’t not intend to accept the veracity of your argument.

PJ made three points:
1. He made a statement of the law that I believe to be incorrect. I am open to persuasion (not arrogant), AND I believe it is possible for someone not legally trained to find precedent (not arrogant).
2.There were two quotes attacking a comment made by Jeanine Martin who did not write the article. I decline to address them.
3. Howell supports Comstock so it does not make sense that he would try to do her in. I’ll address this.

Regarding item 3: I agree it does not make sense that Howell was trying to do Comstock in. Dating back to February, I received private communications (that I described in my February post) and public comments suggesting that Republican leadership was actually brilliant/nefarious and had a secret plan to maintain the 8-3 split. I disagreed. I always felt they had their heads in the sand and thought that they would just magically win their appeal and everything would be okay.

As time has progressed no evidence of the secret plan has come to light. In fact all evidence suggests they either believe fully that the appeal will be successful, or that they actually want the courts to redistrict. The title of the post is slightly mocking of the position that they want the courts to redistrict. The actual substance of the post makes clear that I think they dropped the ball and were incompetent.

It is not logically possible for the G.A. Republican leaders to be both successful in a conspiracy, and incompetent at that same conspiracy. So you either have to accept the mocking headline as the be-all end-all of my post, or accept the entirety of the substance of the post and recognize the headline for what it is, satire.

Contrary to your comment, I believe that readers of the post are not uneducated peasants. That is why I do not talk down to them, or you, and instead use satire to evoke an emotional response with the title that is seemingly contradicted by the article itself. My wordplay at times may be obtuse.

Great post Paul. The chance Republicans in Virginia will be happy with the districts drawn by a special master is close to zero.

Wonder if “The dog ate my homework” excuse works as well in court as it does in school?

Great post. What is wrong with these people??!! We have morons on “our team”.