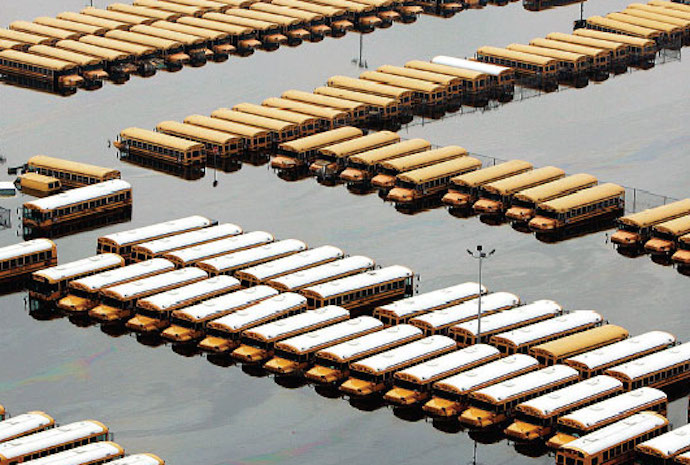 The former madcap mayor of Washington, D.C., Marion Barry, made one of his most notable public announcements when murders in the nation’s capital had reached a macabre crescendo of two per day (over 700 for the year). Hoping to stem the carnage, Mr. Barry appealed on local TV to the shootists’ civic pride and “Christmas spirit” with a memorable request:

Out of loyalty to the streetwise politician they had endorsed, the Washington Post delicately ignored the mayor’s absurd request. But other news organs treated it as vintage slapstick. It’s considered in political lore as one of Hizzoner’s signature utterances.

“We have a lot of drug users in the city. After several days without their drugs, they’re probably pretty upset…” (Well, I should say…)

Long before our time, wags noted that The People get the governance they deserve. The preceding vignettes amply prove that point. It was doubly true in New Orleans, where “leaders” of a city situated below sea level (and protected only by earthen levees) evidently had no coherent emergency plan in place for the likely eventuality of a destructive hurricane. Over 1800 people died and thousands of refugees were crowded into a football stadium without adequate provisions or sanitation. Scores – perhaps hundreds – of public-school buses, which might have been used for evacuations, sat flooded and unusable. NOPD officers fleeing in their police-cruisers were stopped as far away as Florida by state cops who assumed the cars had been stolen.

Undoubtedly fearful that their negligence would be exposed, Big Easy officials denounced the Federal Emergency Management Agency, the Army, and President Bush (not necessarily in that order) for not getting aid to the flooded areas more quickly. Louisiana Governor Kathleen Blanco wouldn’t cooperate with federal officials and then wept on TV about all the hurting people. Senator Mary Landrieu (D-LA) said she’d like to “punch” the president. And New Orleans Mayor Ray Nagin publicly cussed-out Mr. Bush for not landing his plane there – thus denying Hizzoner a politically valuable shirtsleeves photo-op. (Cities are literally dying for leadership like that. You could ask Marion Barry, were he still around.)

Partisan Democrats all but blamed Mr. Bush for Katrina – citing global warming as the probable cause of recent hurricanes, and denouncing him for not adopting the Koyoto Treaty. (In other words, these storms might not have occurred, had Mr. Bush acted on global warming.) That charge is now being reprised. Mr. Trump is taking heat for refusing to endorse the Paris Climate Agreement. Environmentalists intimate that Hurricane Harvey’s hit on the Gulf Coast might have been averted by more decisive action on climate-change.

Past years have seen some pretty nasty storms:

Current destruction in Texas and Alabama might be the greatest in US history. Experts are calling Hurricane Harvey’s flooding a “thousand-year event.” I don’t recall presidents being blamed for past storms, but that was then. Now every hurricane is a political event. Mau-mauing presidents – especially Republicans – for failing to “stop” climate-change or global warming has become a sport of choice inside the Beltway. Mr. Bush was bashed unmercifully over Katrina and Sandy, and now Mr. Trump is getting “the treatment” for Harvey.

This new tactic relates to environmentalists’ unshakeable belief that global warming – now called “climate-change” – is causing an increase in severe storms. Scientists have shown that this claim is unsupported by historical data, but psychologists say prying a true believer away from a fixed delusion is all but impossible.

In a related vein, it somehow became the federal government’s responsibility to furnish aid and mega-funding for hurricane-victims. Presidents have earned “stature points” by standing before microphones after a big storm – often wearing fashionable windbreakers – to gravely pronounce a damaged region a “disaster area” and promise that federal aid will flow there to help.

In today’s complex, interconnected, and highly technical society this makes some sense, although there is no specific Constitutional authority for it. In many ways, only the federal government can marshal resources and manpower to project organized, large-scale aid to storm-damaged regions. Federal agencies help most when they can work with state and local levels to assist victims as quickly as possible. All this is in America’s finest tradition.

But it’s becoming more difficult to justify federal subsidies for rebuilding damaged homes and businesses in high-risk areas – especially seacoast-communities – where storms often hit. New Orleans is such a place. Lying below sea level, the city lacks natural drainage. Friends who once lived there say streets start to flood during ordinary rains, until powerful pumps suck the water into the storm drains and out to sea. A storm of Katrina’s magnitude would have overwhelmed this system – particularly after the levees were breached.

In coastal Texas, reservoirs were evidently built near towns without much thought given to where the water might go if releasing some of it became necessary when those reservoirs became dangerously overfilled. Certainly a staggering amount of rain fell, but much of the flooding that covered entire housing tracts, as shown in TV news-reports, was caused by reservoir-drainage. Because of its location and climate, Houston is used to heavy rains. In all fairness, it’s doubtful that city planners ever anticipated a catastrophic 1,000-year flood.

Having libertarian leanings, I believe people should be free to build homes and live wherever they wish. The government requires many things of us, and bosses us around to an extent that would have shocked the Founders. So I’d rather not have bureaucrats telling us where we can or cannot live, unless some compelling national interest is at stake.

I would draw the line at unlimited subsidization of this freedom, though. People can build houses on vulnerable seacoasts and in the flood-plains of rivers if they want to. They can build on the San Andreas Fault for all I care. But they shouldn’t expect public funds for rebuilding whenever a storm blows through, the river floods, or a quake knocks their place down. Should the freedom to do something risky entail an expectation of public succor when things go wrong?

We need to ask if being the insurer of last resort is a proper role for the federal government. And if it is, where’s the limit? If I choose to drive a car made of English porcelain, should the public pay to fix it when it shatters after a routine fender-bender? The cost of doing exceptionally risky things belongs with the individuals who take those risks, not with all of us, via government.

I heard a radio interview with a lady who had lived on the Gulf Coast for three years. I’m so sick of the storms,” she said – her tone implicitly asking why somebody doesn’t do something. My wife and I looked at each other and said, “Hello! Go live somewhere else!”

I grieve for those who were hurt or suffered damage from Harvey. They have had a tough break. As private citizens are so moved, they will send food and help to the needy. Many of us will chip in. Americans have always done this voluntarily, and it’s already happening in Texas. But doling out unlimited tax dollars to rebuild places where disaster will probably strike again is poor stewardship of the public purse. There are limits to everything.

Mr. Trump would be called everything from Hard-hearted Horace to Son of Diablo by Big Media and pols of both parties if he failed to approve billions (possibly tens of billions) for Texas recovery. So he will probably deliver. Indeed, he might agree, personally, with doing so. OK, I get that. Nobody wants people to suffer. Mr. Trump has even donated $1 million of his own funds for disaster-aid.

But if we’re serious about stopping the unlimited growth of government, we really need to reconsider uncritically throwing public funds at rebuilding after natural disasters. We could begin by designating some coastal areas as “high risk,” and announcing that federal monies for storm-damage rebuilding there will be limited, according to a specific formula.

Lately I’ve even hearing some politicians say that much-needed increases in funding for national defense might have to be shelved because of the unexpected cost of disaster-aid for Texas and Louisiana. Egad! With the Korean Fat Boy running wild and the Russkies on the move, we’ve got to get a grip here. Call me hard-hearted, but enough is enough.

“The welfare of the country is squarely up to us as individuals. That is where it should be, and that is where it is safest. Governments can promise something for nothing, but they cannot deliver…” (Henry Ford, 1922)

Good article. And this problem will only get worse as population continues to grow (primarily due to third world immigration) in Florida and along southern coastal states.

Speaking of hurricane politics, it sounds like something similar — no, I’m not going to explain that — was going on in the back seat of this car the other day:

An ongoing investigation into “suspicious” activity in the back seat of a car involving an inmate trustee at the Fauquier County jail led to the Tuesday arrest of Teresa Jo Burchfield, the wife of an ethics attorney to President Donald Trump’s business organization.

Burchfield,53, is married to Bobby R. Burchfield, a partner at Washington’s King and Spalding, who was appointed as an independent ethics advisor to the Donald J. Revocable Trust in January.

Teresa Jo Burchfield was arrested Tuesday afternoon in a parking lot adjacent to the Fauquier County Adult Detention Center after deputies found her in the backseat of a car with an inmate/trustee at the jail, according to sheriff’s office Sgt. James Hartman.

Burchfield and the 23-year-old inmate were having sex in the car, according to a criminal complaint filed at Fauquier County General District Court.

“The defendant was caught in the backseat of her vehicle with an inmate…,” Dept. J. B. Thorpe wrote in Burchfield’s criminal complaint. “When the inmate exited the vehicle, he handed me a bag of brown pills
(capsules), that he claims to be workout pills.”

Umm…..Seems like someone is quoting Sheila Jackass Lee…Houston is NOT below sea level…To start an article with a blatant error is unforgivable…

I think he said New Orleans was below sea level, not Houston.

Let the free market sort it out via insurance costs.

Troll! The Republican leadership wants a bailout. We need to support the leadership.

My bad….I had Sheila Jackson Lee in mind when she stated that about her own district…Houston