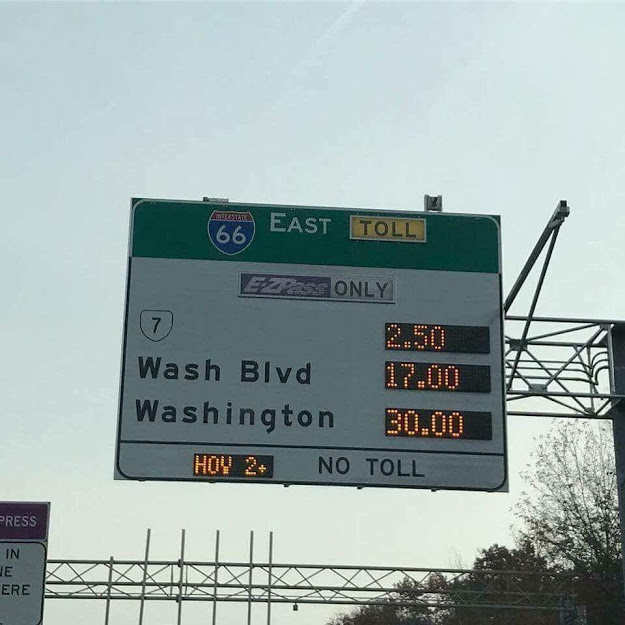 I-66 tolling scheme is unequal – Arlingtonians, DC , Maryland residents pay no tolls to drive solo in their cars

I served on the Loudoun County Board of Supervisors and Northern Virginia Transportation Commission in 2015 when the I-66 Inside the Beltway tolling plan was unveiled by Gov. McAuliffe’s Transportation Secretary, Aubrey Layne.

Unlike the Capital Beltway HOT lanes, which toll 24/7 and in both directions, the I-66 “toll scam” only applies to solo drivers going Eastbound AM and Westbound PM. Hence, Arlington, Falls Church, Alexandria, and yes, DC and Maryland residents, can commute solo westward in the AM and pay no toll at all. An estimated 27% of Westbound motorists on I-66 are DC and Maryland but pay nothing for corridor road improvements.

Yet, a Fairfax, Prince William or Loudoun resident heading East in the morning pays some $14.50 to $40 depending on congestion on I-66. Totally outrageous given the high tolls thousands pay daily for the Dulles Greenway and Dulles Toll Road. In addition, despite the fact I-66 traffic can be bad in both directions nights or weekends, there is no toll – again, another advantage to Arlington and Falls Church.

During the fall 2015 campaign, Republican delegate and senate candidates put on their yard signs “Stop $17 I-66 tolls” and Democrat Sen. Jennifer Wexton joined the chorus in opposition to the 66 tolling.

Indeed, I-66 is supposed to be HOV restricted, which means folks with special transponders who have at least a second passenger can ride for free.

Due to the tolling, average daily traffic on i-66 eastbound is now only 15,000 cars going east — almost all carpoolers — versus an average 50,000 before tolling began. So, will there be enough revenue to widen 66 to three lanes?

On Dec. 7, VDOT awarded a $85 million contract to widen 66 and add access improvements from the Dulles Access road split to Fairfax Drive/Glebe Road. This is now slated for completion in 2021 – a few years earlier than expected. This is a good thing, but I still believe restriping and using the LEFT shoulder should be done in the interim.

I am concerned given the broken promises by McAullife and Layne some snag could delay this widening. Plus, some toll revenue goes to local projects in the 66 corridor – which include bike and pedestrian lanes for Arlington.

I urge Fairfax, Prince William and Loudoun commuters to lobby Governor McAuliffe and incoming Gov. Ralph Northam, along with our delegates and senators of both parties, to make this tolling more equitable and create an interim third lane inbound now through restriping and use of the shoulder. Let’s stop letting Arlington and Falls Church dictate transportation policy for the region.

“Due to the tolling, average daily traffic on i-66 eastbound is now only 15,000 cars going east — almost all carpoolers — versus an average 50,000 before tolling began.” These numbers are not accurate. Carpoolers were less than 40% of the vehicles in first week of tolling.