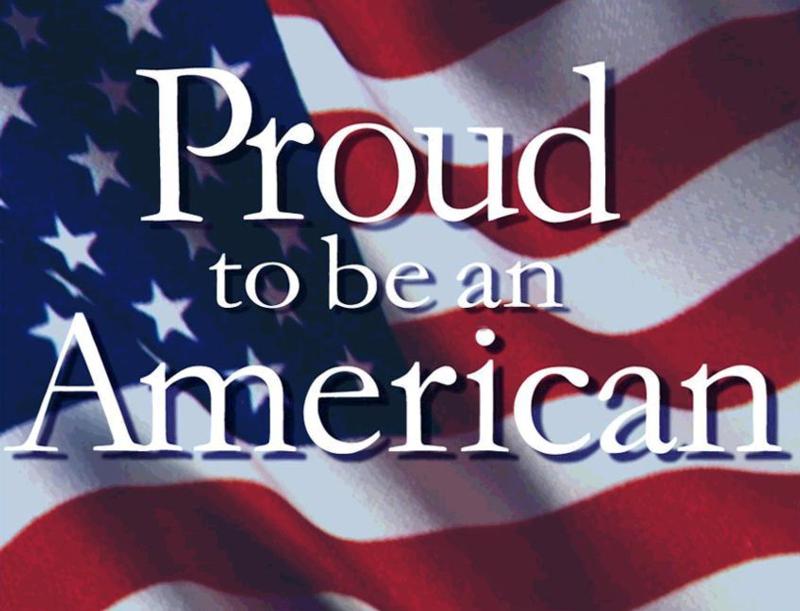 I AM AN AMERICAN!

Far too many citizens either fail or are afraid to admit that they are Americans.  They do not speak the word “American” because they might be committing a microaggression or appear superior.  The result is that the word “American” is used less and less, and that clearly favors the global socialist open world, one without nations.

A lot of the articles written on Republican websites attack Donald Trump for the use of the word “American” in his campaign.  In doing so, they allow Hillary Clinton, a pro-global socialist with obvious anti-American sentiments to escape the condemnation she so rightfully deserves.  So here is my #NeverHillary condemnation.

Hillary Clinton was born an American and raised as an American.  However, she quickly shed the ideals of America and she did so for personal political power.  She did little work as an American and never built or ran an American business.  Nevertheless, she benefited from the very society she grew to despise because that is the American way.

Hillary’s political career, in particular her activities as Secretary of State, show just how little she cares for America.  She took the most highly guarded of national secrets and exposed them on an unsecured private server.  The pay for play and money laundering activities that resulted greatly enhanced the Clinton’s wealth.   Thanks to political corruption, Hillary will not pay the price for her crimes.

But her disdain goes far deeper than America as an idea; it goes straight as an evil arrow to the heart of the individual American.  Her basket of deplorables and irredeemables comment is well known, however the basket is actually much wider and deeper than the various “isms” and “phobias” it admittedly contains.  It extends to those who work and Christians who pray.  It extends to the women that Bill raped and molested.  It extends to any American who actually believes that America is “a shining city on a hill”.

There are lots of Republicans who are troubled by Donald Trump.  He is crude, rough around the edges, and a bit too quick to take personal offense.  He isn’t the kind of candidate Republicans can easily embrace but he is the kind of American that can beat the evil of global socialism.

We are at a crossroad.  We are either going to take the left fork into open border and global socialism territory or the right fork as an American.  Me, I am taking the right fork.  Those of you who don’t will reap the whirlwind of societal decline and eventual tyranny.

What a waste of bandwidth.

I get the distinct impression, nut job Republicans are prepping for a renewed assault on the Presidency. An assault to grind Washington to further halt. They have had eight years of practice of whining against Obama, so I am not sure why the frinzy over concerns of doing it for another four years against Hillary. They have become very good at it. They can’t figure out how to govern so they just turn the lights out and bitch.

Wouldn’t it be wonderful if Republicans learned how to govern and looked for achievement rather than teeth mashing. Same for Democrats. The art of listening and compromise seem non-existent.

Get use to it. Trump is a dead candidate walking.

Wouldn’t it be wonderful if Washington “ground to a halt”?!

It is grinding to a halt. Obama has seen to that and Hillary plans more of the same. Socialists need a docile and compliant population not a robust free citizenry.

not good for you neighbors who have mortgages to pay and kids to feed.

I hope they appreciate your efforts with other people’s money on their behalf.

You should be proud of your generosity.

He obviously has no clue when it comes to how markets work. He thinks the government is the mortgage industry and the farms/groceries are government property.

Or he knows that his neighbors work depend on fulfilling public needs?

Ah, the incestuous nature of the welfare state where 90% of what is done is meaningless. We often take the best of our people and grind them to dust in the mill of government.

If you live in Loudoun county, chances are that the majority of your neighbors are govt employees or contractors. Perhaps you don’t know your neighbors because you scare them with your alt right talk?

Never mind, they live out beyond the most affluent counties in the country, the ones closest to the capitol.

Instead of trickle-down, democrats favor the spend-out strategy?

You can distort what I wrote all you want. That is the GOP way after all.

Jeanine said to shut down the govt. I said this would impact many in our community.

You seem to think that there is no need for govt. this is confusing especially with the GOP position of spending more on military, etc. I guess you want the border guards to take a few weeks off and let any and all into the country. What else would shut down if you shut down the govt?

when did you make this discussion about welfare (and I am assuming you are not counting corporate welfare, the kind that allows Trump to avoid federal taxes)? We were discussing Washington grinding to a halt. This implies the govt shutting down, which means that your neighbors don’t work and not gov’t services are delivered including those constitutionally mandated.

Don’t extend this to attacks on poor people

I dont believe in welfare for any organization or individual. It is an attack not a benefit in that the recipient has no incentive to change. Again, I go back to Ben Franklin who said way to help the poor was to make them uncomfortable in their poverty. And there is absolutely no reason to bail out corporate failures whether they be GM or Trump or the Clinton Foundation.

Govt for all or govt for some? Either way somebody has to pay for it

Spain has been without a national government for nine to ten months. The people love it.

You guys seem almost like you’re trying to convince yourselves of that.

Are you going to be ok with a Trump presidency?

Am betting he doesn’t know about the Potemkin Village.

Only two paths? I think not. Maybe a choice between two people this election but our way forward has many options and many possible paths. We will absolutely be making turns, zig zagging and even going through a few circles as we progress. Why the defeatism?

Why the ignorance? When there is a fork in the road, you don’t go into the unplowed woods.

If she wins, American Exceptionalism will become a distant memory. The rule of law will be meaningless; the laws will only apply to we little people. A hrc victory means American Citizenship will be rendered worthless. Clinton-kaine will continue running down the American Economy, with pitiful GDP growth and burdensome regulations. All those outcomes are totally unacceptable.

What do you mean “the rule of law will be meaningless”? There is no rule of law – that’s already dead.

And Obama was a paragon of constitutional advocacy. Your comment is just plain fantasy.

But you think “There is no rule of law – that’s already dead.” is correct? did you ever believe in the Constitution?

Totally agree with Dr. Warren and wonder if he may be a descendant of the famous Dr. Warren

who fell at Breed’s (not Bunker) Hill during the battle opening the American Revolutionary War. I would like to mount a bumper sticker like the heading of this article if one is available to order?

There are custom bumper sticker shops easily found on the internet. There are also t-shirt shops, license plate frame shops, flag shops, and many other ways to express your sentiments. I have used them all at one time or another.