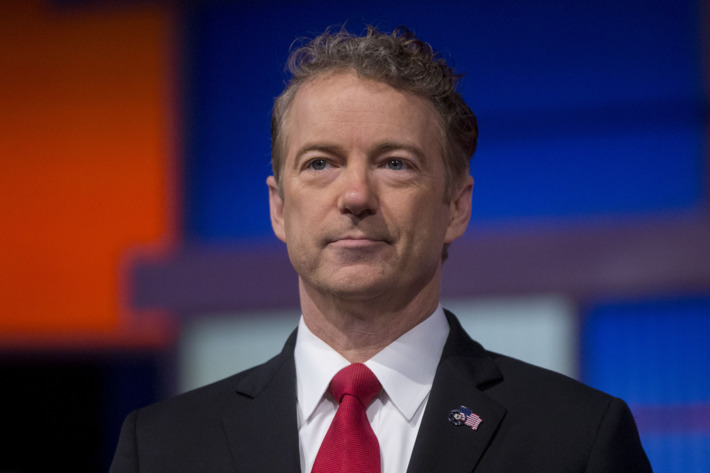 I stand with Rand

Rand Paul proved what a hero he is to small government conservatives like myself last night.  He led a mini-filibuster on the Senate floor, talking about the hypocrisy of the establishment Republicans who were trashing Barack Obama (and rightly so) for trillion dollar annual deficits, yet going along with a spending bill which would potentially add another half trillion dollars in deficits over the next 2 years.

First off, let it be said for the record that there are a lot of good things in this spending bill.  First and foremost, it gets rid of IPAB Independent Payment Advisory Board), the so called “death panel” of Obama Care.  IPAB was the board which would determine literally who would get health care spending and who would not.  Meaning that if you donated to the right causes, you and your family would be more likely to receive necessary health care, than someone like myself who does not donate to liberal causes.  And just as important, we are starting to rebuild our military after 8 disastrous years of Barack Obama requiring the military to do more with less.  Further spending cuts are made to Obama Care.  These are good things.

I can understand the need and desire to be “bipartisan”. But there is a problem with bipartisanship here.  Our country can stand up against a lot of things.  But no country can survive unsustainable debt for extended periods.  And while we rightly blame Barack Obama for raising our national debt by 10 trillion, the fact remains that establishment Republicans were complicit in the debt increase.  But the big spending Republicans would always say – well Obama made us, or the Democrats made us.  But now we control the White House, and both houses of the Legislative branch.  We should be able to pass spending bills which either reduce spending or at least hold overall spending to current levels indexed for inflation.

What good is bipartisanship when you give one side the keys to a vehicle which will take us over a cliff into bankruptcy?  The modern day Democratic party lives off the teachings of Saul Alinsky, one of which is to spend us into poverty so that the leftists can seize power and destroy our Republic and turn us into a dictatorship.  Sorry, but to be kind to such actions is not being bi-partisan.  It’s called committing suicide.

Most politicians grand stand way too much.  At times so does Rand Paul. However here Rand is 100% correct.  He gave a speech last night which interrupted the Senate vote on the spending bill to say these words:

I stand with Rand was last modified: February 9th, 2018 by John Massoud

Well the whole bloody government is unsustainable in the long run. The GOP Inc. likes to spend money on their donors just like the Democrats do. Trump isn’t anything special for spending one way or the other. I would say that maybe we should back off of all the foreign wars. Spending a trillion dollars in Iraq for instance accomplished NOTHING. But then neocons and their fellow travelers like a couple of writers for this site will tell me how we are making America safe by wasting money in the Mid East! Yes and I suspect some of those guys might be working for government contractors who get to vacuum up that defense spending so that they can have a swell lifestyle in Loudon County… So we Might as well live it up now.

Who you going to stand with next week when you find out what Trump gave Pelosi to support this Trump vomit budget in the House? How can anybody but a Republican be so stupid as to not know Trump cut a deal with Pelosi/Shumer to get his wall? A wall deal that will allow 1.8 million DACA’S, increased illegals and legals, in exchange for $30-40 Billion for the wall? Just so trump can say he kept his promise to his stupid, ignorant, base.

You forgot to call is racist

You think that all the Trump rhetoric about $25 Billion for his $10 Billion wall just vanishes, Pelosi dispatches just enough dacacrats in the House to pass the Republican budget vomit is all just a coincidence, now do you?

There are comments on other conservatives about a troll invasion to stop the discussions of Obama/Clinton criminal uses of the FBI/DOJ. Any diversion is being tried so expect “racist” or some “phobe” in the near future. Apparently every article is under attack in some way.

However did you write this without using the word Antifa? That was once your favorite, but somehow it’s faded, your predictions of the Antifa ascendance seemingly now out of style. Who now? Righto, the global socialists working to destroy America!

Obviously, they can take a break for a moment. With Trump on the watch the budget is ballooning, the deficit even more so. Just back from Davos! Is he the global socialist of which you write? Be on the watch, Pence is standing next to the NoKo Queen! If you had even one image of Obama doing the same it would be a poster with crosshairs.

Here you go. Remember, I told you first. Who you standing by now, sucker?

Have to agree with you on that wall. It is symbolic more than anything. Illegal immigration is run by organized criminals who are smart. They’ve managed to create hundred billion(s) of dollars narco business importing drugs to the US. Illegal immigrants are a side business to drugs–same smuggling routes etc. A wall won’t deter them for long. Granting another amnesty is all you need to keep high levels of immigration going. And that is what this horsecrap DACA thing does.

The illegal immigration thing is all political talk, horse crap.

Illegal immigration will continue to be allowed to run unabated in the Commonwealth because the install services of our Construction industry is to be estimated a 500 billion dollar a year industry.
Both R $ D know this and are part of it.

US Postal Service is the delivery method of choice for foreign “pharma.”

I will take the wall as a down payment on controlling illegal invasion from the South. You have no solution so you are an open borders global socialist working to destroy America.

You are a fringe crank painting with such a broad brush that it is comical. Anyone who pretends that all Democrats or all anything behave in the same way is a crackpot.

Writing a sentence like the last one above marks you as someone not to be taken seriously.

The Trump GOP can never, ever argue that they are fiscally conservative…ever again…

I understand the motivation. My problem is that you cannot go on and on with two week budget extensions. However, my most significant problem is what is President Trump and the Republicans to do after 8 years of Obama? If I understand correctly, President Trump is trying to grow the economy at a rate sufficient to prevent this predicted deficit from happening. Can he do it? Darned if I know but I do not that static analysis of a dynamic and rapidly changing economy is meaningless – I remember Ronald Reagan.

What are they to do after 8 years of Obama?

Only one answer matters: What they said they were going to do, which is balance the budget. Promised this numerous times, knew exactly where we stood when it was promised.

Instead, he will double the deficit. Cut taxes and raise spending. Compete with companies for credit, driving up interest rates, obviating any benefit a tax cut might bring some.

Trump has overspent and over borrowed all his career. It is his track record. Unfortunately for us, bankruptcy is not a path for our great nation. There is no great fat farm that takes away our debts and sends us away healthy like it did his casinos. Cadet bone spur of the five deferments cannot run from this battle; He brought it to our door.

It IS very difficult to consider Paul as anything other than a grandstander given his vote on Trump’s give away to international corporations funded on the national debt.

It will prove difficult to find 100% agreement with anyone on anything, but Rand’s instinct to get govt out of our personal lives finds agreement here. Overall, he is willing to call out hypocrisy and for that I am appreciative. He opposes surveillance incursions and decries the nanny state, for example.

You might want to check Obama’s presidency. His borrowing was unprecedented.

Since 2011 republicans have controlled the house of representatives and have borrowed their way into this giant hole.

Yep. Republicans are a dismal fiscal disappointment at all levels of government. At least the Democrats are honest about their desire to tax and spend. Republicans just lie about it.

Yup at least you know what you have with Dems.
Republicans find a new sales pitch to screw us.
The Illegal immigration issue brought them the Presidency two years later you can still hire them.
Thanks Trump, Black, Newman and to the others that sit on their hands, kneel.

Honesty an integrity are not words to be used when discussing Democrats. Do you seriously believe that the Clintons and Obamanites are honest? That is absurd.

Actually it is tax, borrow and spend for the Democrats. They borrowed a lot of money for the Obama stimulus. You have the GOP accurately described.

Rand Paul is correct on this. Fiscal responsibility is fundamental conservatism. Doubling deficits is not what America thought it was buying. It’s fraud, worse still one perpetrated on our children.

What good did Rand accomplish reminds me of Freitas droning on and on.

I think he reminded a lot of us conservatives that fiscal integrity matters at some point.

Unfortunately, it doesn’t matter to elected republicans once they are in power.

Trump is betting on the Reagan model to stimulate the conomy and help with deficits. It is a risky bet because if Democrats manage to win back the House, they will do what the did to Reagan and blow the budget sky high on the welfare state. They will then blame Trump as they did with W when the economy tanks big time.

Kinda like Freitas voting to take 45 million from the NVTA for Metro and the cronies.

Sometimes you have to piss into the wind to maintain your self-respect.

Some piss while sitting down. They know who they are.

I did before, I do now, and I will always.