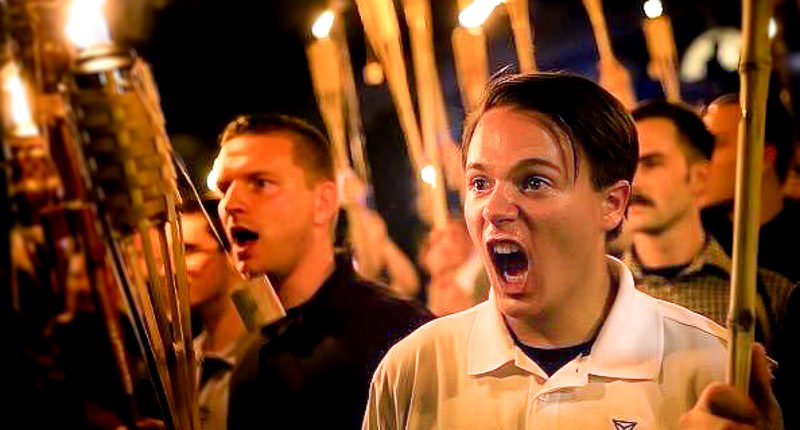 It's not my "Right" you're trying to Unite - Photo: HuffPo

I Will Do Something. And I Will Do It Now.

“The only thing necessary for the triumph of evil is for good men to do nothing.” – Edmund Burke

“Bad men need nothing more to compass their ends, than that good men should look on and do nothing.”  – John Stuart Mill, 1867

I watched the coverage, disgusted at what I saw.  My three little girls watched beside me; the oldest asked me why all those people were fighting on TV.  I tried to explain it to her, but how do you adequately explain a march of Neo-Nazis in 2017?  I ended up telling her that some very hateful and badly-behaved people were yelling and throwing things at people they thought looked different from them.

And as I sat there, I thought to myself that someone should stand up and stop this.  Someone should stand up and clearly condemn the marching with torches, the Nazi salutes, the chants of “blood and soil.”  Someone should unequivocally state that this is not a group supported or condoned by the Republican Party.  That we, as a nation, are better than this.  We are the nation of all men created equal, endowed by their Creator with certain inalienable rights.  That yes, although any and all persons have free speech rights, that their words and actions were nonetheless deplorable and unacceptable, and that their hatred resulted in the death of a young woman.

I then watched our President equivocate, make excuses, and blame everyone.  I watched him refuse to take a clear stand.  I watched him clearly reading his script of Nazi condemnation, written for him because apparently he cannot think of how to condemn this behavior on his own.  And then I watched as he took an obvious off-script turn and looked up to tell the crowd that he condemned the hatred, bigotry, and violence “on many sides – on many sides.”

There are sides here: they are the sides of good and evil.  There can be no good in emulating the behavior of Nazis.  There is nothing redeeming there – we cannot allow our President to try to allege that there were “fine people” in a crowd of torch-bearing, heil-shouting white supremacists.  To do anything but utterly condemn them is to excuse and justify their actions.

Tina Fey’s biting commentary on Weekend Update, where she shoved cake in her mouth while lamenting the horrors of what happened in Charlottesville, is a nod to Marie Antoinette’s “let them eat cake.”  Although some have derided Tina for what they believe was a recommendation that people stay home and stay quiet instead of fighting NeoNazi terrorism first hand, I believe that Tina’s intent (as she is a very intelligent woman, despite my disagreeing with some of her politics) was to point out, through satire, how many of us are watching this horror unfold and are sitting at home, filling our faces with cake, and doing nothing other than generally expressing our horror to our similarly-situated friends.  That we are the very definition of privilege to have the ability to sit at home, peacefully, and watch these things unfold on TV, and then take no other action than to generally complain on Facebook.

Edmund Burke is often attributed with the quote: “The only thing necessary for evil to triumph is for good men to do nothing.”  John Stuart Mill’s quote at the top of this article states a similar refrain: “Bad men need nothing more to compass their ends, than that good men should look on and do nothing.”

In the several days after the violence in Charlottesville, a picture made the social media rounds.  It was a black and white photograph from the 1940s,depicting a group of mothers, standing naked, holding their babies close to their chests, clutching their young children’s hands, and waiting to be killed by Nazi bullets.  I first saw it as I sat in the Prince William County Courthouse, having just finished arguing a motion.  It wrenched my heart wide open: I pictured myself, standing in that line, humiliated and terrified, holding my one year old little girl close to me, the other two girls standing at my sides, looking up at me, questioning why this was happening to us.  I looked at that photograph, and then I looked at my suit jacket on my arms, my bag of court paperwork beside me on the bench, my ability to vote, to practice law, to represent clients and argue motions.  To quote my favorite musical, Hamilton, how lucky I am to be alive right now.

And then I knew that I couldn’t just sit here and weep at the horrors of history while I ate cake and did nothing.  That I have to stand up.  That I have to tell the world that I am a Republican Woman who does not accept or condone how our President has handled his Presidency thus far.  That I respect the office of President too much to allow his behavior to go unchallenged.  That I have to get involved, to make myself heard, to speak on behalf of others who I know feel the same as I do.  That I have been given this moment in history, this incredible opportunity to be a mother and a practicing attorney, and that to sit quietly on the political sidelines would be to squander that opportunity.

That the only thing needed for this present evil to triumph is for me to do nothing.  And I will not do nothing. I will not be silent.  I will not be quiet anymore.   I don’t know yet the precise plan that is unfolding, but I will not sit by and bemoan our nation’s state without taking action.  Edmund Burke is also credited as having said: “Nobody made a greater mistake than he who did nothing because he could do only a little.”    Even if I can only do a little, I will do something.  And I will do it now.

I Will Do Something. And I Will Do It Now. was last modified: August 21st, 2017 by Guest Contributor Heather Steele
47 comments

Heather is a litigation partner at a law firm in Northern Virginia. Heather is working on a book about her experiences as a litigation attorney and mom to her three young daughters. She also writes about parenting and lawyering on her blog, "What's The Deal, Heather Steele."