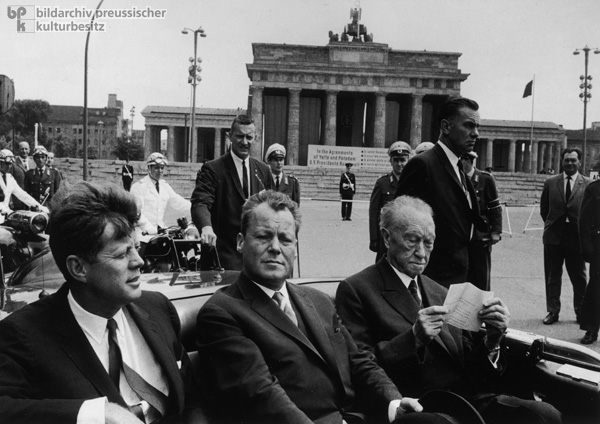 JFK in Berlin, 1963 (from germanhistorydocs.ghi-dc.org)

When John F. Kennedy addressed thousands of wildly cheering Germans in 1963 Berlin, he famously declaimed, “Ich bin ein Berliner.” The next day, cartoons appeared in the Berlin press showing a donut wearing JFK’s face. It turned out that “Berliner” is the vernacular for a jelly donut made famous by that place.

Of course, Mr. Kennedy was a faux German, and certainly a faux Berliner, so he (and his staff) couldn’t be expected to know about jelly donuts. He was simply trying to bridge a national and cultural divide by delivering an emotionally charged sentence to the German people, in their language, at a time of great tension and peril. He got a pass for his minor gaffe because his heart was in the right place. Nobody called him a “moron” for not knowing from jelly donuts named after cities. Wags have joked, ever since, that it was fortunate he wasn’t speaking in Vienna, where he might have proclaimed himself a hot dog. (“Wien” is the German name for Vienna, and even Americans know what a “wiener” is.)

Republican presidents often get roasted (so to speak) for slipups on points of geography, history, politics, pronunciation or behavior; Democrats, not so much. In the midst of the Watergate scandal, Richard Nixon delivered his famous line – “Your president is not a crook” – looking (and sounding) very sinister with his five-o’clock shadow and raspy voice. TV organs endlessly replayed it to hammer the message that Nixon was undoubtedly the crook he denied being.

President Gerald Ford was mercilessly panned for misstating that Eastern Europe was free of Soviet domination in a 1976 presidential debate with Jimmy Carter. (This fit in nicely with the “stumblebum” image the American media had constructed for Mr. Ford.) He clearly meant that he wouldn’t let the Soviets overrun Europe, but why let this get in the way of a good Ford-bashing story?

Before a 1984 radio address, Ronald Reagan joked to radio technicians that we would begin bombing Russia in five minutes. Technicians perversely leaked the off-air joke to the media, thereby revealing the previously hidden fact that media-tekkies have no sensayumah. A furious uproar resulted, including a report that the Soviet Union went on alert for a half-hour because of the bogus comments. Defense Secretary Caspar Weinberger later confirmed the Soviet alert, but he denied that the USA’s DEFCON level had changed at any time.

2008 GOP vice-presidential candidate Sarah Palin got the full “hoity-toity” from bloggers when a (later debunked) rumor circulated suggesting that she thought Africa was a country, not an entire continent. She didn’t say this on the air, but a White House transcript of the interview later made it appear that she had. (Details, details…) Long after the campaign, I still met perfectly intelligent people (or so I had thought) who “knew” Sarah Palin was just a dumb brunette in high heels who didn’t know Africa was a continent. As Mark Twain and Winston Churchill said, a lie gets halfway around the world before the truth has its boots on – or variations on that theme.

The estimable Joe Biden – once just a heartbeat away from the Oval Office, and now hoping to sit in the big-boy chair himself – has elevated blooperism to high art, but ordinarily sharp-eared media watchdogs either take no notice or laugh off his gaffes as “just good old Joe.” Remember him asking the guy in the wheelchair to stand up to be recognized? (Could Joe Biden actually have healing powers?) But I digress…

During his terms in office, George W. Bush was lampooned and branded as a hopeless moron because of his occasionally scrambled syntax and unpolished forensic style. Reporters followed him around with hand-held recorders to catch every mangled clause or mispronounced word. Mr. Bush did not disappoint, adding classics like “misunderestimated” to our national lexicon. But his sins were mostly grammatical and “pronunciative” (as Mr. Bush might say). If he had ever suggested that Austrian was a language, for instance, there would probably have been calls for his impeachment on grounds that a person of such diminished capacity should not be holding high office. (Contrary to rumor, Mr. Bush did not coin the term “supercalifragilisticexpialidocious.”)

The Austrian-language gaffe is exactly what President Barack Obama committed during a press conference in Strassbourg, France, when he took a question from Austrian TV reporter Sonja Sagmeister. By way of explaining the American idiom “wheeling and dealing,” Mr. Obama said that he didn’t know how that would be expressed in “Austrian.” The Final Minority Report, among others, mildly twitted Mr. Obama’s language skills, noting that Austrian is not a language. (Austria’s official language is German.) On the same European tour, Mr. Obama referred to “England” instead of the “United Kingdom,” which is the correct designation. (Nothing to see here. Just move along…)

My favorite Obama-gaffe, which, sadly, received very little publication, occurred when he honored a Navy Corpsman, but pronounced his title “corpse-man” – probably because he had little familiarity with NCO ranks in the Navy. Another occurred during an interview with former Clinton advisor George Stephanopoulos, when Mr. Obama absent-mindedly referred to his “Muslim faith.” The faithful George Steph quickly corrected him by saying, “You mean your Christian faith.” A few pundits chuckled over Obama’s “Freudian slip,” but it got no media traction. (“Muslim, Christian – hey, isn’t it the same God?”)

Right from the start, the Mainstream Media did their best to ignore these and other Obama gaffes. When Mr. Obama was caught on video making unguarded comments to one Joe Wurzelbacher (a.k.a. “Joe the Plumber”) that suggested a commitment to socialism, the media jumped on the story. But they went after Joe the Plumber, not Barack Obama – digging into Joe’s finances, his professional status (he was not, gasp! a licensed plumber) and his personal life. Very little attention was given to the substance of Mr. Obama’s remarks about “redistributing” Joe’s good fortune to those not doing as well. The eleventh-hour socialism-gaffe, which must have made Obama campaign wonks pretty nervous, was conveniently swept down the memory hole by a worshipful media, as The One cruised serenely on toward elective history.

Once in office, Mr. Obama’s low bow to the King of Saudi Arabia was more difficult to sweep aside, since it was clearly caught on tape. Some media outlets showed it repeatedly. Despite White House disclaimers – i.e., the king was much shorter than Mr. Obama, so the president was simply shaking hands down at his level – the images showed an unmistakable bow. It was the kind of gesture U. S. presidents never make to royalty. Mr. Obama was caught in flagrante delicto, and it was a not easy to get free of that tar baby.

Americans don’t like to see their presidents or other government officials making obeisance to foreign potentates – no matter how important the latter are to American national interests. Labor leader George Meany famously set the protocol-standard for treatment of royalty by Americans when he greeted the King of Spain: “Yo! Howya doin’, King?”

Mr. Obama was learning on the job, so things got a little bumpy after the dazzle of Michelle’s toned, muscular arms faded. Every president commits gaffes, and BHO was no exception. The media did him no favor by trying to ignore or conceal them. Gaffes are an important part of a president’s official record because they show him to be fallible. This was especially important in Mr. Obama’s case, since so much of the public – particularly the media – had imputed an infallibility to him that had no basis in fact. President Obama was a good-looking guy with an attractive family. He read well from a teleprompter, but his experience in running anything – much less the greatest country on earth – was nonexistent.

Donald Trump, on the other hand, had plenty of experience running businesses and making the tough calls demanded by that milieu. Being a New York guy, he’s used to characterizing situations (and people) accurately – as he sees them. His public utterances lack the smooth, tactful cadences of a seasoned professional politician who always tries to triangulate difficult issues.

In Big Media’s world, Donald Trump’s outspoken style has made him the King of Gaffes. Every public statement he makes is certain to contain some metaphor or rude name (e.g., “Pocahontas” or “Crazy Bernie”) that reporters and pundits can jump on. Media watchdogs are compiling vast catalogs of Trumpean gaffes as a stockpile which opponents can draw on to show that the president’s intellect is sub-standard. Mr. T is a rapid-fire gaffe-machine, and an endless source of grist for legions of cub reporters who dream of firing the journalistic “shot” that unhorses a president.

Pouncing on presidential gaffes is great sport for media players who apparently have nothing better to do, and it provides some entertainment for their readers and watchers. Any president is going to make some mistakes. Distracting the public from a president’s actual accomplishments by obsessing on those minor miscues is not one of the media’s more helpful services. At best, it’s a trivial waste of time; at worst, it presents a distorted picture of our country’s Head of State.