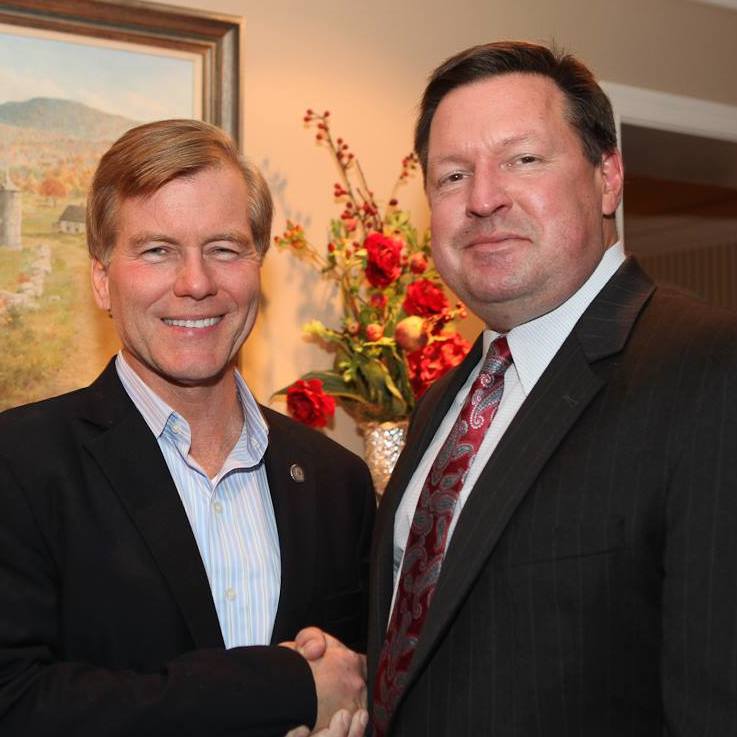 Our own Dave Webster was a guest yesterday on The John Fredericks Radio Show to discuss the Bob McDonnell appeal proceeding.[read_more]

Webster’s coverage, published here on The Bull Elephant, was probably the most in-depth of any in the state. He discussed it in length with John Fredericks. Click below to listen in.

Finally – The real deal with no greek chorus ( either pro or con ):
http://rdeliason.com/2015/05/11/the-key-issues-in-bob-mcdonnells-appeal/

Is this the attorney Dave Webster that states, “My legal background and my experience negotiating large-scale government and private business partnerships will benefit the Town especially when we respond to development opportunities presented by the Herndon-Monroe Metro Station. ” http://patch.com/virginia/herndon/dave-webster-announces-candidacy-for-herndon-council

Negotiating contracts on behalf of Jack Kent Cooke was not lobbying.

Did you betray trust there also?

This appeal is no longer about Bob McDonnell. May never have been. The original indictment may not have been about McDonnell. The picture is a much larger one.

Now that Democrat Menendez is on the run, the claim that the McDonnell charges were politically motivated doesn’t ring true.

This appeal is about the continuation of the wiping out of middle-class America.

The American Corporation is not about to compromise, nor will they give up. They own government through their checkbook carrying lobbyist’s.

Who is paying McDonnell’s legal bills?

Who do you work for Mr. Webster? Are you a lobbyist? Just who signs your paycheck?

The officers of the courts’ Uniform Commercial Code presumption that they are presumed right.
And that you are presumed to mere chattle owned by the officer’s mere claim – no matter how the sheeple bleet they have no standing to be heard. Read it. Then watch it at work Start at the courthouse door:

I work for myself. I am not a lobbyist.

Thanks for the reply.

In what capacity do you work for your self?

Some pirates are more honest than others – even if only to prove they are capable of it.
BBC Oxford style got it right in WW2: Only lie when it is both right to lie and worth expending your credibility on.

The compulsive liars ‘tell’ is that when they open their mouths they lie. Then when they speak the truth and desperately need it to be believed – no one will believe them. This is one of the hells that natural laws brings to unprofessionally compulsive liars.

Deer put on rambunctious displays to both attract mates and demonstrate that they would be too much trouble to be worthy prey – But the survivors are not so compulsive that they cannot be still.

Interesting, I wonder who y’all really are. This OP’s tight rhetorical fugue of layered puffery, equivocation, dissemblance and inversions of predicate and consequent is quite masterful. Surely, ‘The Bull Elephant’ has been gelded by ‘The Father of Lies’. Its ‘Bull’ has become as papal bull but with even less respect to first principles. I would be entirely comfortable with letting those persons behind this TBE opening post to ‘die while still in their sins’ since the lies are so professionally constructed that it is obvious that those persons are not among those who ‘know not what they do’ and are of a ‘rebellious house’. Yet, the false witness born by this TBE OP against the commonwealth of Virginians is fully seasoned with the intent to murder their sovereignty. So this indictment is made that I might not be accomplice to this TBE crime by my silence.

Give your witness here to defend yourselves or admit to this indictment by default.

Just have more appreciation for truth than you. You could test that if you are up to it.
Better yet for you to take small steps – Try repentance. You might find the relief from corruption of mind refreshing.

Apparently you find the less than worthless things said in the TBE OP indefensible also – Yet the neatly wrapped pack of lies and those wedded to them are close to your heart.
How sad, How pathetic, your defense of the lies are nakedly impossible without covering yourself further in what you know is corrupt – – – So your alternative to attacking the truth of the message is to attack the messenger in your mind by contriving a civil commitment to shut up the witness against a legion of state and federal felonies. How long do you think that will escape judgement and condemnation?

But don’t worry you can ban and delete me and know one will indict you before your final meeting with God.

In the past those legion of officials with customary felony supported by the VA18.2-482 and retaliatory felonies of others have been protected from a grand jury’s indictment because of official (and
felonious) subversion of VA19.2-191 &200.

It appears that the only available remedy is ***sufficiently broad citizen education on the power and duty of Virginia grand and petite
juries***.

Given ANY Virginia grand jury fully informed of their VA19.2-191 & 200 authority & duty a sweeping probable cause indictment of every
living member of the Virginia GA and Bar association would then issue from the grand jury – but no judge or potential pro tempore judge could even attempt to try the cases short prompting their immediate arrest on contempt and TREASON VA18.2-481(5).

The only person remaining with authority to adjudicate the matter would be a NON-lawyer governor like Terry McAuliffe and his adjudication would be constitutionally limited to PARDON UNDER PAROLE OATH.

Then freedom well and durably achieved might arise from VIRGINIA and sweep the nation due its immediate and HUGE practical and spiritual benefit.

Perhaps, it would be best to start with the end in mind but not at the conclusion.
—————————————————————-
Not only is McDonnell CONVICTED, McDonnell is conclusively evidenced and defiantly admits the facts of
committing FELONY 18USC1951(b)(2)”obtaining of property from another, with his consent, induced by wrongful use of “. . “color of official right”.
That is extortion with a strong flavor of VA18.2-111 Embezzlement, Larceny” of a ‘gift’ that really belonged to the OFFICE not the officER since the gift was received “by virtue of the office” not the man.

The McDonnells’ were not convicted of 18USC201 “Bribery”.
And could not have been because that law applies to federal public officials not state public officials (including the office of First Lady).

So the ‘official acts’ and ‘quid pro quo’ arguments of “BRIBERY” means nothing in the appeal of the crime convicted.

Even if the Appeal is fixed God will not respect that.

Plus those felonies are a tiny fraction of the LEGION of VA18.2-111, VA18.2-481(5) and VA18.2-482 felonies the Bob McDonnell has perpetrated as he has boldly & conclusively evidenced in the public record – As if that could make CUSTOMARY FELONY his right.

The McDonnell’s presenting federal court problems are among the least of those that will be ultimately adjudicated as GUILTY.