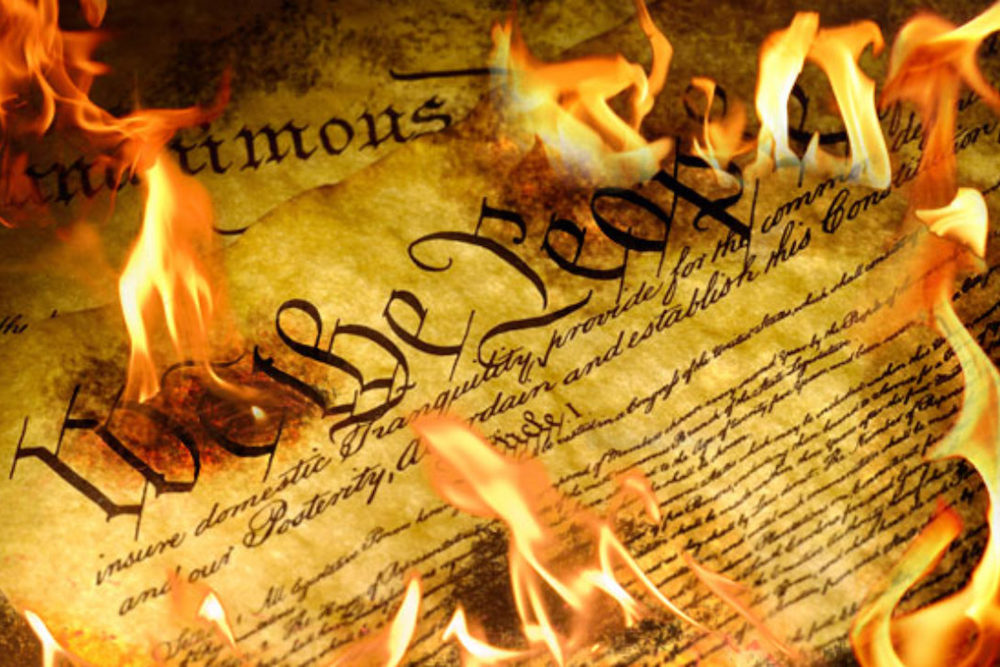 If people get sickâ€¦.burn the Constitution?

Over the past week or so, as the Corona Virus starts to spread more, or is detected more due to increased testing, Government has grown by leaps and bounds.

Outside of the constraints of the Constitution.

Irrational fear has been used by rulers, back to the dawn of time, to control and manipulate people.  In fact here in the United States we have a sad history of government using irrational fear to violate the civil liberties of a free people.

Whether it is the Trail of Tears, the Japanese Internment in World War II or the confiscation of privately owned firearms in the wake of Hurricane Katrina, we have seen time and again that the people can be manipulated by fear and allow unjust government actions to occur.

Will this Virus be any different?

We have seen, over the past few weeks, schools, churches, malls, restaurants and other businesses closed down.  In San Francisco enforced â€œshelter in placeâ€ laws are now in effect, with New York City now openly considering such, and states such as Pennsylvania, Connecticut, New Jersey and New York closing everything from hair salons to tattoo parlors, authoritarian style government is trashing the 1st Amendment.

Are people getting sick?  Sure. Do we know the extent of this flu?  No. But that does not mean we simply burn the Constitution and cower in fear?

Cowards did not write the Constitution and cowards will not protect it.

In fact in Minneapolis, they have stopped issuing â€˜purchase permitsâ€™ for handguns (as tyrannical as that is to start with) and in the town of Champian, Illinois, they have banned the sales of firearms and ammunition.

And, in continued violation of Article 1, Section 8 of the United States Constitution, the worldâ€™s largest private banking cartel, known as the Federal Reserve, is flooding the nation with over 1.5 TRILLION in paper notes.

How else do you think the â€˜nanny stateâ€™ is able to send allowance checks to millions of people; instead of course, just ending taxation during this crisis? I could go on for pages on the â€˜blowbackâ€™ we will see from this monetary manipulation, but that is for another article.

Across the land, government, and those in control of it, are watching how fear can manipulate the otherwise free people of our Republic.  And they are taking copious notes.

Just how much of your liberty are you willing to sacrifice to obtain security against the flu?

And will this government power grab, once this â€˜crisisâ€™ is over, be reversed completely? If you think so, you have far greater faith in the political class than I do.

As this virus continues to spread, which it will, hopefully you will see the folly of government â€˜securityâ€™ and realize that the fabric of a free people is individual responsibility and preparedness.  And then extend it to the vast majority of unconstitutional government we are saddled with today.

I am not saying this sickness is not to be taken lightly, but I am saying that individual liberty and your constitutionally protected rights trump any crisis.

For the Founding Fathers never said that in a time of danger, or if a bunch of people get sick, we should just burn the Constitution and return to authoritarian rule.

I will leave you with two thoughts.  In 1775 the newly christened Army of the United Colonies, was encamped outside of Boston.  After the Battles of Lexington and Concord, over ten thousand Patriots filled its ranks and laid siege to the occupying British Forces in Boston.  These were mostly rural citizens, who had never been exposed to large populations. Over the summer almost 17% of the troops caught Small Pox. And even though Small Pox had, at the time, a 30% mortality rate, Washington did not dissolve the Army and send everyone home.  They stayed and did their duty to defend liberty.

Now I am not saying we are the Patriots of 1775, but the Corona Virus is not Small Pox either.

And finally I leave you with the words of Christ, in John 16:33, who reminds us that fear is crippling, but in the end, everything of this world, and everything that is not, are in his control-

â€œI have said these things to you, that in me you may have peace. In the world you will have tribulation. But take heart; I have overcome the world.â€