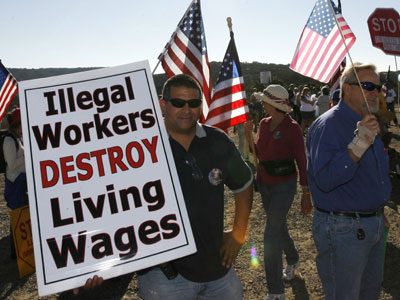 When discussing the issue of illegal immigration, it is important remember that the reason why it’s an issue, is because our government, under several administrations, decided not to enforce our immigration laws. It is obvious to me, that were these laws enforced, no fence or wall would have been necessary, since there would be no cause for coming to America illegally.

Indeed, if foreigners immigrating to our country illegally, could not find work, could not find shelter, could not access our health care, our banks, and the benefits of our laws, then the stark difficulties of living here uninvited would have been more discouraging than any wall, no matter how tall or well guarded it might have been.

After a great deal of thought and personal reflection, I do not believe that building a wall is a good idea. That wall would be nothing more than illusion, a ruse financed by our government to convince us that they are doing everything they can to prevent illegal immigration.

If our government was serious about dealing with America’s immigration problems, then they would enforce America’s immigration laws. No new legislation would be required. No tens of billion dollars poured down the drain in what would serve as the most expensive Public Relations fraud in United States history. The money spent on financing the construction of a wall would more than finance twenty years of law enforcement in this country.

If we agree, then, that without law enforcement, that the building of a wall along our southern border would be unprofitable, then the question remains how do we enforce our laws going forward? What do we do with the men, women, and children who have come here illegally?

While I do not believe that a single immigrant living in the United States deserves the right to live here, I do not believe that they and their American families are entirely to blame. If a parent tells their children to be home by nightfall, but do not enforce this requirement, the responsibility of whatever trouble ensues as a result of those children staying out all hours of the night is equally shared by the parents.

Republicans, in general, having taken offense to the entitlement of illegal immigrants, to their utter lack of respect for our laws, and to the trouble they’ve caused being here illegally, do not wish to hear any solution which does not end in throwing these immigrants off American soil. Proponents of amnesty, however, claim that to accomplish this would be impossible, so out of sheer pragmatism, we ought to let these immigrants stay.

The sentiment of the average Republican is certainly justified and the proponents of amnesty are disingenuous when they say removing all illegal immigrants from our territories is impossible. For less money than we spent on the Iraq War, we could round up and deport every illegal immigrant and their “citizen” children, under the threat of lawsuits. Our courts, however, do not respect the rule of law and are more than likely going to sustain the incorrect opinion that the 14th Amendment makes citizens of any child born on American shores.

We would not be successful deporting the children of illegal immigrants. The probability that this statement is accurate is so high that one could justifiably consider it to be a fact. Therefore, we must ask ourselves how we wish to proceed. We do not owe these illegal immigrants or there children anything. It is true that they have no respect for our nations’ laws or sovereignty, but in their defense, neither does our government.

Therefore, we must decide on a plausible path to dealing with present circumstances. If I am correct in assuming that the reason why we refuse to enforce our laws, is because we’ve made criminals of anywhere between 12 and 25 million human beings by inviting their invasion, then in order to put a stop to illegal immigration there must be put in place some process for dealing with the illegals already here.

Our politicians talk about “the back of the line” and having illegals “pay a fine”, though I am not certain this goes nearly far enough. The United States Congress has the constitutional authority to write our immigration laws and there is no reason why they cannot write a law specifying a category for immigrants illegally residing in our country. As such, our country can proceed however it likes in dealing with the rights and status of illegals.

I would begin by stationing border guards along every known and heavily traveled route used by illegal immigrants into the United States. I would simultaneously enforce every law on the books, while creating permanent VISA status for illegals. I would give citizenship to their children, but never to their parents. Their children would not receive citizenship until they are 18 years old.

Illegal Immigrants who wish to stay in America the moment our laws are enforced must pay extra taxes, regardless of their tax status as defined by our IRS Code for legal citizens of the United States. Parents of illegal immigrants would not only pay higher taxes, but they would not qualify for a singe financial aid program, other than their health care. Failure to register as an illegal immigrant occupying US Territories would necessitate deportation. If it is so important, to them, that they live here, this policy ought to be viewed as fair, compassionate, and just.

These higher taxes would be earmarked for three specific funds: Health Care, Prisons, and Education. Our hospitals, prisons, and our schools would be the sole benefactors of these taxes apportioned by registered populations and by State.

I am not concerned that these taxes would place the entire population of illegal immigrants into lifelong poverty. That would be the price they pay for breaking our laws. It would also be just, since they would be paying, essentially a proffer, for the cost of their being here.

Upon turning 18 or applying to an American University, children of illegals would be eligible for appropriate aid in accordance with the law, including Selective Service, so long as Selective Service still exists.

There is no doubt, that among my conservative brethren, such a plan would rightfully be considered amnesty. Since I have no real shot of running for office one day, I suppose I’ll take the risk of putting such a proposal on proverbial paper, as it were.

Our laws will never be enforced, so long as it means requiring our government to clean up its’ mess. We ought to move forward in accordance with this premise cemented in our minds, because if we don’t move forward now, our problems will only get worse.