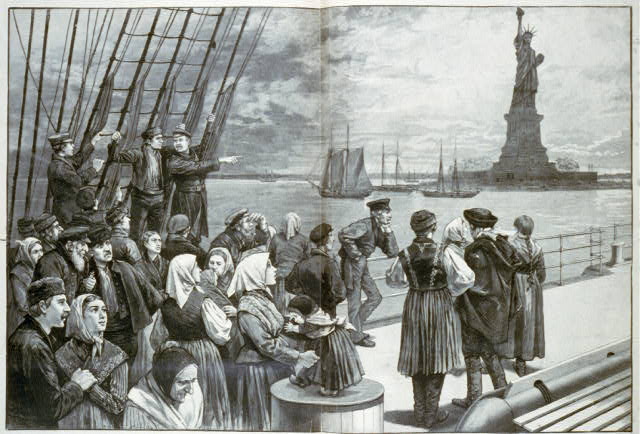 Most of us have been there; the computer screen turns an ominous blue, data becomes irretrievable, and whole files disappear. Then panic sets in. You start punching keys and issuing threats. Nothing happens.

You have to reboot the system, or worse, buy a new computer.

The same thing has happened to U.S. immigration policy. It is structurally broken beyond repair, brazenly misused and manipulated, and after years of ever increasing scandal, the public has been pounding on the keyboard and issuing threats. Nothing happens.

Finally, the 2016 race for the Presidency has brought the subject of both legal and illegal immigration to the forefront of the nationâ€™s attention, thanks entirely to Donald J. Trump – and in spite of the fact that while large majorities of Americans have favored reform for years, they have been ignored by politicians of both parties.

Now, with the world awash with new surges of migration, primarily young Muslim men pouring into Europe, the flow of refugees into the U.S. set to massively expand, and the southern U.S. border flooded again by illegal aliens with untold Middle-Eastern men among them, the issue cannot be ignored anymore.

[As I write, Congress seems poised to fund a continuation of the Obama refugee resettlement program, while the refugee lobby presses for 200,000 more refugees; see Ann Corcoranâ€™s “Refugee Resettlement Watch” here for a September 15 action alert.]

The real issue at hand, though, is really not about immigration as it practically affects the country anymore â€“ it has nothing to do with ethnicity or national origins. Itâ€™s about whether or not an exceptional nation founded on a still unique Constitution can maintain its soul, its identity, and its purpose. Â

The questions this poses seem clear.

Will our immigration policy affirm the historical model that the U.S. has never been â€œethnicâ€ in perspective, but embraced a code, an ethos, born out of the Founders vision of human liberty, self-responsibility and God-given rights?

Or will our immigration policies accelerate the damage already being done to the concept of liberty, linking it to socialist precepts that the government must be the primary benefactor of rights to the individual, taking from some and giving to others, and consuming increasingly more individual liberty to do so?

There is a great danger to the Republic in this choice; the former historical model promoted the concept of assimilation; the latter is promoting a standard of integration. They are no more alike than water is to gasoline.

The integration concept has been gathering energy and focus since the Hart-Celler Immigration Act passed in 1965, gradually replacing the concept of a â€œmelting pot,â€ where immigrants came to America to contribute and become assimilated into the larger culture and share in the spirit of the American Experiment in self-government.

Incrementally this model has morphed into the â€œbenefactor,â€ socialist worldview of multi-culturalism and ethnic identity, with no mention of assimilation into the American culture. It now even includes the â€œopen bordersâ€ extreme viewpoint that migration is an economic right, a view shared by many transnational corporations that simply want the cheapest available labor, some religious organizations, and has adherents across both political parties.

House Speaker Paul Ryan, as an example, is an advocate of the â€œany willing worker concept;â€ that any available worker from any place in the world, has the right to compete for any job in the U.S. with no restrictions.

With that, is assimilation even possible?

The Obama Administration for its part in the campaign to transform America, has promoted this benefactor concept in its â€œNew Americansâ€ initiative, and is promoting the multicultural and transnational concepts using public-private ventures with radical leftwing groups, including George Soros funded organizations.

The mission is clearly to remake America and to partner the nation to the global community.

For over two centuries, the United States has had numerous waves of mass immigration. Each wave had its own specific immigration policies in place, as benefited the country at the time. Sometimes restrictive, sometimes not (and there have been mass deportations of illegal aliens, and religious restrictions as well). But constant throughout the years was the belief that those who come to our shores wanted to be Americans.

That is not so obvious today. Now, the substantial economic incentives of the welfare state for both legal and illegal immigrants, free education and medical care, and dual citizenship have created an atmosphere of hyphenation.

Being an American is increasingly viewed as an optional box to check, and the honor of citizenship is relative to what is received, not what is required. Â

Like every generation before us, we have to reboot our immigration systems to make them relevant to the circumstances we face. Not only has the time come to reboot; perhaps we have come to the point where we have to place a moratorium on all immigration and refugees until we put together a new system based on what is in the best interests of American citizens and the cause of human liberty.

The American public is already there. Where are our politicians?

We are about to be re-booted right out of existence. Where are our politicians? Filling their pockets w/our money to destroy us.

All very interesting articles if you have the time.
http://www.nola.com/politics/index.ssf/2016/09/us_refugee_goal_2017_syria_ira.html

Paul Ryan is an advocate of whatever Wall St and special interest money dictate.

You cannot stop what is wrong with America without first stopping the flow of Wall St. dollars. They control government and the press with our money.

It’s to late to stop it. The game is over.

Yep, the game is over, and we lost.

As I watch Western Europe, I see just where the global socialists are taking us and it is truly an astounding horror of misery and tyranny. Their policies vis-a-vis immigration have created a situation where elementary school children are being taught to defend themselves and their schools against Islamic terrorism. Imagine your 8 year old coming home scared and wondering why they are hated so much. We are headed there if we do not defend our nation and its borders, language and culture to quote Savage.

One final thought. Islam is not a religion. It is a political ideology whose actions are excused by a set of religious principles. It opposes everything created by the West. It doesn’t have an elected democratic republic, it has a totalitarian caliphate. Unconstitutional sharia renders infidels as second class citizens to be manipulated and mistreated. Its culture is pathological paternalism which treats women and children as pawns. And, lastly, it has a 1400 year history of violence, intimidation and conquest by any and all means. Unless we accept reality rather than fanciful wishes, we will eventually be forced into war or the surrender of migration jihad.

I keep telling you that this isn’t an issue… IT IS THE ONLY ISSUE! That moron that writes articles for you here who tells about what a great job Obama is doing with immigration and how immigration is not an issue. Well… stupid.. Obama has his immigration bureaucracy closing every case it sees in immigration… telling Border Patrol agents to don’t ask don’t tell, let them in if they claim that they claim asylum… gearing up his bureaucracy for an illegal amnesty that some damn liberal court is going to let fly eventually.

If Trump doesn’t win, this country is going to be a socialist nightmare you bloody idiot and the GOP Establishment dopes that have enabled Democrats since 1965.

Trump said that other day that if he doesn’t win, he will be the last Republican to have a sliver of a chance. Hillary will set loose an amnesty that will swamp anyone who doesn’t want their pocketbook handed over to the government to pay for the third world invasion.. And that is 100 percent accurate.. I think it is too late…

American citizenship has basically become a commodity and is now about how many bennies the immigrant can get out of it.

They can get those bennies without citizenship. Why would they want to bother with citizenship? The disgusting thing is our Republican Congress supports this! Even the Speaker of the House thinks this is great!

The founders warned us to beware the political classes. We are now beginning to,understand the meaning of that warning as our government rewards law breaking and punishes citizenship. The socialist welfare state is unsustainable and it is currently being propped up by monetary manipulation.