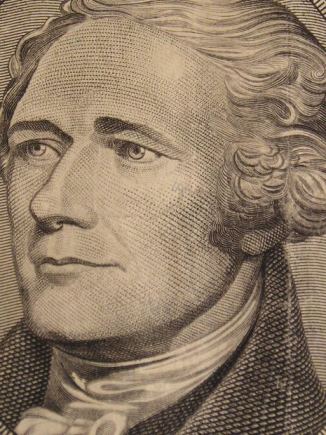 In Defense of Alexander Hamilton

This morning, guest contributor John Massoud published a brilliant article painting Aaron Burr as the first anti-establishment politician. However, I wanted to offer a brief defense of Alexander Hamilton, who is not the Joe Lieberman Democrat John painted him as.

Alexander Hamilton was a bastard. Hamilton rose through the ranks of Washington’s army and increased his political-power based upon his genius, not his family name, or his parents plantation, or his connections with powerful families in England.

Aaron Burr was the grandson of Jonathon Edwards, on his mother’s side, and the son of the President of what would become Princeton University. Hamilton came from nothing. Hamilton had no family in the Continental United States. Hamilton was managing a business at an age when most of us were playing wiffle ball.

Aaron Burr grew up with the Edwards family and was easily and unsurprisingly accepted to Princeton (College of New Jersey). Hamilton was denied a religious education because he was a bastard. For the most part, Hamilton was self-taught and became a lawyer on his own merits.

Hamilton helped captain Washington’s troops, ironically enough, to victory in the Battle of Princeton – all while Aaron Burr was following Benedict Arnold in Quebec. I’m not implying anything…just saying.  Hamilton then served on Washington’s staff on a wide variety of both military and non-military matters.

Hamilton was a brilliant diplomat and intelligence analyst, as well as a master of coin and one of the few founding fathers who understood macro-economics. Burr eventually used family connections to get onto Washington’s Staff, but lasted less than a month before returning to the battlefield.

Was Hamilton a man of the people? No he was not. He loathed democracy almost as much as he feared it. In this, yes, he shared a great deal with Washington and Adams, who understood that Democracy was as dangerous a form of tyranny as a monarchy. It is true that Hamilton initially resisted a Constitutional Republic, because he felt that it would be too easily converted into a democracy.

Hamilton believed in banks because he believed in capitalization. He understood capitalist system far better than his fellow founders. Heck, the Jeffersonians hated the banks and wanted us to live in a rural utopia – an idealism that almost destroyed us in the War of 1812. Again, Hamilton has proved to be wise beyond his years.

It is absolutely unfair to paint Hamilton as any kind of a Democrat. That is simply not true. Furthermore, Hamilton joined Madison and his good friend John Jay to defend the compromised United States Constitution in the Federalist Papers. Where was Burr?

I love freedom today as much as I ever have, but experience and study have informed me that liberty depends upon a strong Constitutional foundation, the rule of law, the presence of both markets and capitalization, and a strong military. I am federalist. Like Jefferson I believe in State’s Rights, but should the State’s be allowed to legalize slavery or murder? There are limits. We need a strong enough federal government to enforce the federal Constitution – and nothing more.

Hamilton is not what the populists and libertarians make him out to be. Yes, he feared the American people as any wise leader fears the mob. Nietzsche saw the mob for what it was too.

Liberty is not the will of the people.

Liberty is the preservation of our God-Given Inalienable Rights! We can either preserve these through daily violence and force or through a strong Constitutional Republic.

I thank God that Alexander Hamilton was here to help ensure that such a Constitution was given to posterity. Sadly, we did not heed Franklin’s warning, and as Hamilton suspected, this was not a Republic we would keep. We’ve turned to corporatism, oligarchy, and democracy – all abhorrent to a Constitutional Republic.

To Mr. Massoud’s conclusion – Yes, Aaron Burr should be considered a valued member of the Founding Era. However, let us not pretend that he was in the same class as an Alexander Hamilton, who rose from nothing to lead a nation from revolution to liberty.

Ironically, Alexander Hamilton (understanding the devastating effects of debt) advocated for paying off our entire war-debt quickly and in full. This was necessary. However, his decision did lead to the two-party system and the Whiskey Rebellion in Western Pennsylvania. Go Figure.

First off, great article. Anytime we’re debating the greatness of our Founding Fathers it’s a good thing. My comparison of the Federalists as being Joe Lieberman style Democrats was a very rough comparison. But I must say, the reason I would never call Hamilton an “anti establishment” politician was – he was born a bastard yes, but he married into high society. Burr did have a good lineage for sure, but his relatives all died shortly after he was born. And Burr did take on the ruling class in Albany. Where Hamilton was a bit of a monarchist.

The definition of a mob is closely guarded in the eyes of government masters. When they get tired of hearing your BS, you are a mob.

I highly recommend the book “Washington & Hamilton, the Alliance that Forged America” by Stephen F. Knott & Tony Williams. Incredible look at their relationship and the character and the “ins and outs” of building a republic! Great history lesson including Madison, Monroe, and Jefferson as well!

And, Hamilton was for a strong Federal government and weak state governments. For an excellent analysis of the headaches that stance has cause us through the ages, read “Hamilton’s Curse” by Thomas Dilorenzo.

Well, pull out your wallets and I will tell you all about this wonderful product..

Lets start with the background first.

Ever hear about a skin care product called Fur ? Sells on amazon..

also a Fur Ingrown Hair Concentrate which sells for $32 for 14 ml. This contains Chamomile, Tamanu Oil,Tea Tree Oil, Coconut Oil…
Since both types had sold out, the Rino bought chamomile oil, tamanu oil, tea tree oil, and coconut oil and simply made a batch up. Used 1/4 of each product for the first batch, then used the oil mixture on myself.
This stuff really works… Have used the oil mixture on dry and scaly areas, topical infections, and insect bites that would not clear up. Cleared them right up. I am impressed.
Sadly Rino oil is not available to the public. Too many law suit happy lawyers out there. If I make a LLC then I might start selling it.. $10 for 50 ml. Not for the money. I can make more money selling watermelons out of the back of my truck on the side of the road.
However you can buy fur ingrown concentrate or make your own. I would use 5% each of the chamomile, tamanu and tea tree oils and 85% of the coconut oil.
Currently working on the New Improved Rino oil.. That will use coconut oil with tea tree, tamanu, chamomile. dragon blood, frankincense and myrrh oils.. Should have a batch mixed up sometime today. Curious how that will compare.

Had an interesting day yesterday. Made up 50 ml of New Improved Rino oil. However the wife of a buddy was stung about 8 times on her arm by hornets. Her arm was swollen and very painful. So my buddy talked me out of Rino oil to treat her with. I had suggested using an oral steroid but they did not want to go to their doctor to get a prescription. I am rather curious if the oil will have any effect on her problem.
My buddy is an artist who has been suffering from arthritis in his right hand. He is so bad that his doctor has been giving him cortisone both by injection and orally. I broke down and gave him enough Rino Arthritis Elixir to last for 3 weeks to see if that will help. He swears that between the elixir and oil that he feels much better. Think that is placebo effect; I told him we will give it a week and see how he feels then.
Rino Arthritis elixir is oil of Frankincense by the way. I have been taking one or two drops a day for the last 3 weeks and it seems to help my arthritis. I am taking a very pure oil that cost me $90 for 15 ml. Frankincense when taken orally is also a selective cancer cell killer. My buddy has a friend who has cancer and now wants some Frankincense oil to see if it will help his friend. Will have to think about that .