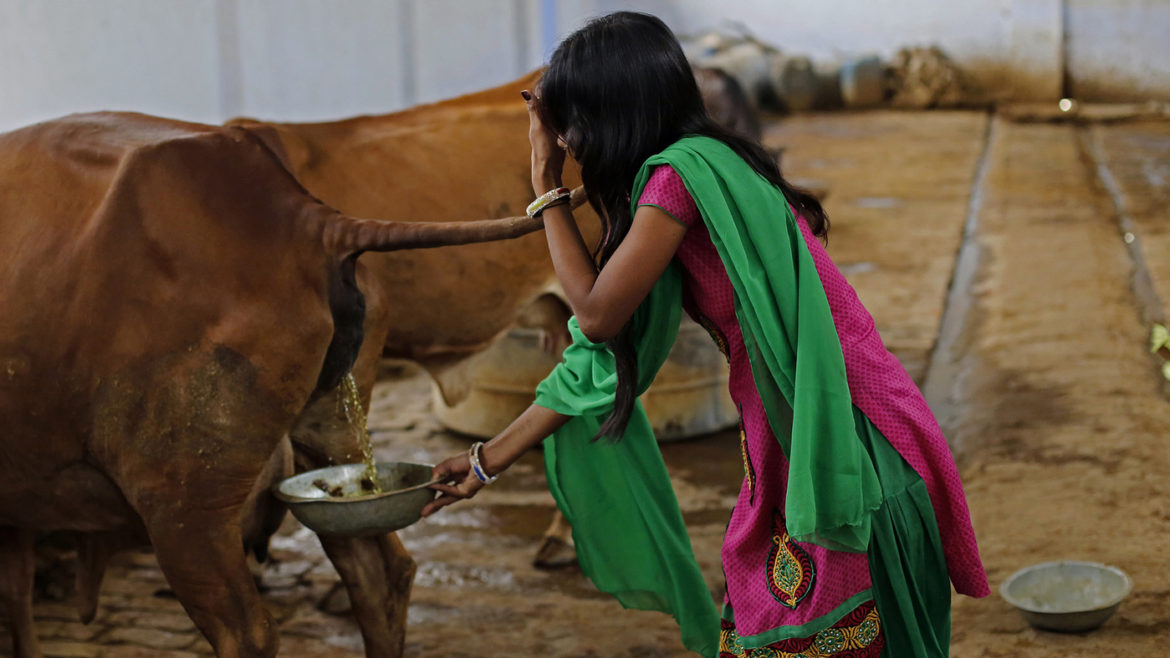 An Indian journalist was arrested for saying that cow dung and cow urine do not cure COVID-19. He pointed this out on Facebook after the local leader of India’s ruling party died of the virus on Thursday in the northeast Indian state of Manipur.

Journalist Kishorechandra Wangkhem wrote that cow urine and dung “didn’t work” for the late Saikhon Singh. He was responding to claims by Indian leaders touting “cow dung and cow urine against COVID-19,” reports The Quint. A member of parliament from the ruling Bharatiya Janata Party (BJP), Pragya Thakur, had announced on May 15 that she drinks a glass of cow urine every day, which she claimed had protected her against the virus.

The arrested journalist’s Facebook post “was found to be insensitive” by Manipur’s “BJP general secretary P. Premananda Meetei and BJP vice-president Usham Deban, who filed a complaint with the police leading to Wangkhem’s arrest.”

India’s official statistics show only about 300,000 deaths from COVID-19, but the true number of deaths is likely in the millions. Many victims die in rural villages hours from hospitals and are never diagnosed or treated by doctors for COVID before they die. So they are never included in the tally of the dead.The Indian strain of the coronavirus is apparently more lethal. “Entire families” have been wiped out by the coronavirus in rural India, according to NDTV:

In interviews with representatives from more than 18 towns and villages in different parts of the country, officials outlined the scale of the carnage – from entire families wiped out to bloated bodies floating down the Ganges River to farmland left untended due to a lack of workers.

Many people said the scale of the crisis is much bigger than official numbers reveal, with villagers afraid to leave their homes even if they have fevers and local authorities failing to properly record virus fatalities.

India reported a record 4,525 deaths on May 18, while its total reported cases exceeded 25 million, according to India’s Health Ministry.

But many COVID-19 fatalities are going unreported, such as the death of 59-year-old Kumarsain Nain. As NDTV notes, “Unable to walk and gasping for breath, Nain’s family rushed him last month to a nearby hospital after they were unable to find an ambulance with oxygen support.” “After we reached the hospital, the doctors said he had died, but instead of recording Covid-19 as the cause of death they put cardiac arrest,” said his son, Praveen Kumar. “The doctor told us there was no need to check whether my father was Covid-19 positive since he was already dead.” Kumar’s brother also caught the disease and died at a clinic. He perished at the same time as six other patients who had also been on oxygen support. “My suspicion is that hospital ran out of oxygen, which led to the deaths,” Kumar said.

The Biden administration helped fuel the spread of the virus in India. It could have reduced the spread of COVID-19 in India by promptly making available America’s unused stockpile of AstraZeneca vaccine doses. But it didn’t. And it delayed the flow of raw materials needed for the production of vaccines in India.

The AstraZeneca vaccine is not yet approved in the U.S. Moreover, Americans prefer the Pfizer and Moderna vaccines, which are more effective, but cost more and have to be stored at freezing, sub-zero temperatures. But India would have been happy to immediately take America’s unused supply of AstraZeneca vaccine. It can be stored in an ordinary refrigerator of the sort that is found even in places in rural India.