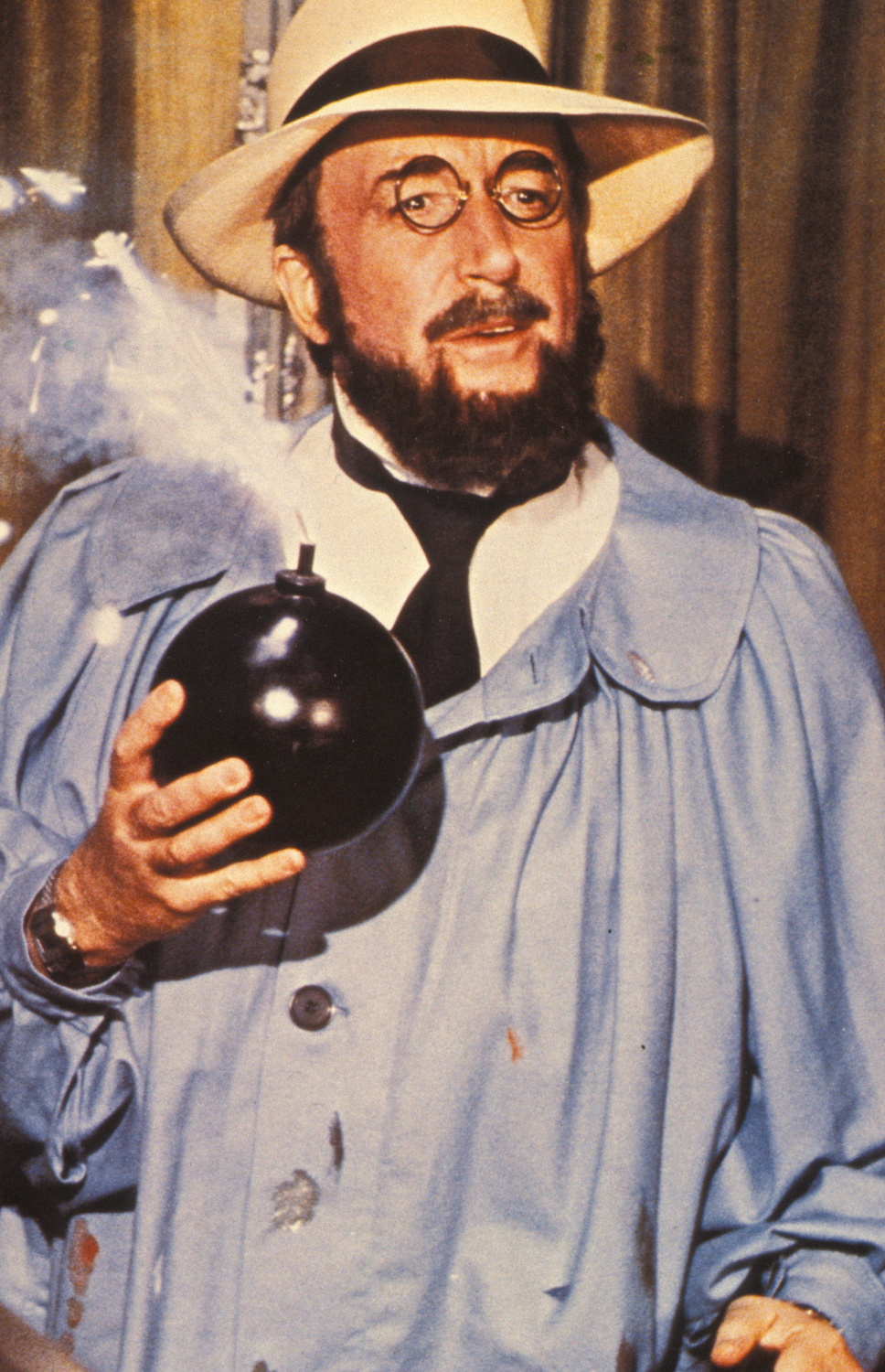 Were you expecting a bömb?

In one of Peter Sellers’ memorable Pink Panther films, a wild-eyed Inspector Clouseau, wearing tattered, smoking clothes, rushes into Chief Inspector Dreyfus’s office shouting, “Infamous powers are at work!” The scene follows one in which Clouseau has witlessly mishandled a bomb sent by an assassin. It’s obvious that it’s a bomb to all but Clouseau. His question to a terrified shop owner – “Were you expecting a bömb?” – became a permanent entry in the American Lexicon of Silly Sayings.

I love those scenes because I love slapstick – in the movies, that is. In real life it’s not usually as funny. In 2012 some Republican presidential candidates engaged in a slapstick routine worthy of Clouseau, although the result was not exactly comedic. In the hope that we can learn something useful for the future, I capsulize those scenes here.

In Act I, Scene 1, leading GOP contender Mitt Romney talked about giving people the flexibility to change health insurance providers as they see fit, instead of being chained to one provider. “I like being able to fire people who provide me services,” said the former venture-capitalist/governor.

It was a perfectly sensible comment, but reporters immediately pounced on it as an “aha” moment. They slyly shortened the quote to “I like firing people” – thereby implying that Mr. Romney enjoyed putting people out of work during his business career. He had worked to salvage failing companies – an enterprise that often involves layoffs to improve a company’s efficiency. The abbreviated quote created a media feeding-frenzy charging that Mr. Romney’s business career was more about ending employment than furnishing employment for people. All of it, of course, was grossly taken out of context from Mr. Romney’s original meaning of dismissing providers of services who aren’t doing the job.

But that was only Scene 1. In Scene 2, some of Mr. Romney’s GOP opponents sprang off the “firing” comment and ran with the idea that Mr. Romney wasn’t a venture capitalist at all, but a kind of “vulture capitalist.” Former Utah Governor Jon Huntsman piously declared that he liked putting people to work, not firing them. Governor Rick Perry of Texas – trying to revive his flagging candidacy by playing to the fears of working people – said he “loved capitalism” and understood how it “needs to work.” He didn’t exactly spell that out, but implied that what Mr. Romney did certainly wasn’t how it was supposed to be. And former House Speaker Newt Gingrich darkly charged that Mr. Romney had made money by picking over the bones of companies he had raided. “That’s not real capitalism,” he said.

(by Nick Anderson of the Houston Chronicle)

During all this Sturm und Drang, Ron Paul and Rick Santorum distinguished themselves by refusing to pile onto Mr. Romney’s “firing” comment or his work with Bain Capital. Speaking of Mr. Romney’s critics, Mr. Paul said, “They are either just demagoguing or they don’t have the vaguest idea how the market works… You save companies, you save jobs when you reorganize companies that are going to go bankrupt. And they don’t understand that.”

Mr. Santorum also declined to dissect the intricacies of venture capitalism and restructuring companies. He would not criticize his opponent’s business activities, noting that the Romney family “…is of great service to our country, and have done a lot of good things.”

This was not just a one-act drama, however. In Act II, Mr. Gingrich ramped up his attacks with radio and TV ads that hammered the vulture-capitalism and firing themes, until Republican voters started taking notice – although not in Mr. Gingrich’s favor. Voters saw that he had no real business experience beyond outfits like Fannie Mae and Freddie Mac, which operate hand-in-glove with government and receive federal funding. Academics and civil servants generally have little experience cutting costs and paring back the payroll of a failing business so it can get on its feet. Republicans began to question whether Mr. Gingrich understood business at all, or was a true capitalist.

Career politicians who lack real-world experience tend to think that the purpose of business is to provide jobs for workers. But its true purpose, as any child running a sidewalk lemonade-stand can tell you, is to make money for the business’s owners. Jobs are a useful byproduct of a successful business, but not its purpose.

Mr. Gingrich’s accusations that Mr. Romney was a “vulture capitalist” succeeded mostly in withering Mr. Gingrich’s own voter-support. That led him to declare (in Clouseau’s classic words) that “infamous powers” were working to damage his candidacy. But as with Clouseau’s clumsy mishandling of the bomb, Mr. Gingrich was the cause of his own ruin. Business-savvy voters were unlikely to hand the GOP’s presidential nomination to a man who not only had conducted a scorched earth campaign against a respectable rival, but who looked suspiciously like a Democrat in his attitudes toward capitalism. Mr. Gingrich is a good man, but he made a lulu of a mistake that time.

Capitalism is a frequent topic of discussion by politicians. It is not a founding principle of the American Republic, but it is the business model which best expresses a principle that is foundational. That principle is the individual’s right to security in private ownership of property. The Constitution does not permit a person’s property to be taken by another, nor by any arm of the government, except via lawful procedures involving a warrant, a statement of probable cause, and sworn affirmations. Amendment IV of the U. S. Constitution is absolutely clear on this:

“The right of the people to be secure in their persons, houses, papers, and effects, against unreasonable searches and seizures, shall not be violated, and no warrants shall issue, but upon probable cause, supported by oath or affirmation, and particularly describing the place to be searched, and the persons or things to be seized.”

Americans of most political stripes (possibly excepting anarchists, socialists, fascists and communists) should give thanks every day that the Founders included in our seminal document the rights that this amendment guarantees. Imagine trying to conduct business if buyers and sellers couldn’t be sure of delivery or payment, or if workers couldn’t count on getting their rightful wages, or if mortgage-lenders couldn’t be confident that they would receive promised interest or repayment of the funds they lent – and if no legal redress for any of these existed. It would be a gangster economy, where only ruthless, well-armed concerns could succeed via coercion, threats or violence.

Secure ownership of property enables orderly conduct of business, which allows owners to sell products and services at a profit – controlled by what customers are willing to pay. Profit-making business built by private investment is what we call “capitalism.” Without this construct, America would be a shadow of what it is – or might not exist at all.

Sophists who claim to know “a better way” to conduct business should be regarded with extreme suspicion and distrust – particularly if they have had no hands-on business experience. It is a fearful thing to fall into the hands of a sophomoric rube who doesn’t know what he doesn’t know.

Recently, we endured eight years of that kind of ignorance under a president who ran on a platform of nebulous “hope and change” and promised to “fundamentally transform” the country. He certainly did that – doubling the national debt and giving us a depressed economy with the highest percentages of idled workers since the Great Depression.  We received the full blessings of his soaring vision for the country – at least in part – because some Republicans who should have known better kicked each other all over the field, confused and discouraged their own voters, and fumbled away a sure win.

Democrats and Big Media had so much fun watching the GOP’s 2012 Infamous Powers shtick that they relaxed and figured they had it in the bag for ’16. They expected the GOP to self-destruct again, and they were confident that voters would accept a continuation of Obama’s “transformed” economy and divisive identity-politics under the firm but benevolent guidance of their wigged-out warrior princess, Hillary Clinton.

True to form, the GOP Establishment did its best to fulfill those expectations, including an ironic role-reversal for Mitt Romney, who came out strongly against the GOP’s leading candidate – a brash, trash-talking New York zillionaire. Despite that non-endorsement, Donald Trump barnstormed through the country and upset the establishment apple-cart – vowing to “make America great again,” and looking and sounding like he might actually do something. Voters shocked the political wise men – not to mention the world – by taking a flier on him and dumping the lovely Hillary.

Democrats blamed the upset on collusion between Mr. Trump and the Russkies to steal the election. For 2+ years they’ve thrown the kitchen sink at the hated interloper – including a “palace coup” engineered by senior DoJ officials. But everything they’ve tried has crashed and burned like the Hindenburg.

Now, with the 2020 campaign revving up, Democrats are running their own slapstick production. The top Democratic candidates are two late-70s white guys – one an avowed socialist who honeymooned in the USSR, and the other a two-time presidential loser known for being touchy-feely with the ladies. Others in the Democrat field include a (would-be) warpaint-Indian princess, an openly gay mayor who wants to restore the country’s morality, a potty-mouthed female senator who drops f-bombs in her speeches, and a ramblin’ roustabout Irish dude who goes by a Hispanic nickname. Their media-idol – still too young to be president – is a fast-talking former bartender-babe who wants to ban planes, cars, and cows to save the planet.

Every one of the two dozen Democrat hopefuls wants to ditch capitalism, rewrite the Constitution, furnish free health care for all, forgive all student debt, give everyone a “living wage” and enact the Green New Deal. To show how much they yearn for comity they are throwing mud-balls, talking smack and knocking each other over in a mad rush to become the hero who deposes Donald Trump and “saves” the country. (What a blessing that we should be alive to see this day! It’s a miracle – almost a rapture.)

Inspector Clouseau was right: Infamous Powers are at work. Is this a great country, or what?

Infamous Powers, Slapstick and Capitalism was last modified: May 7th, 2019 by Woody Zimmerman