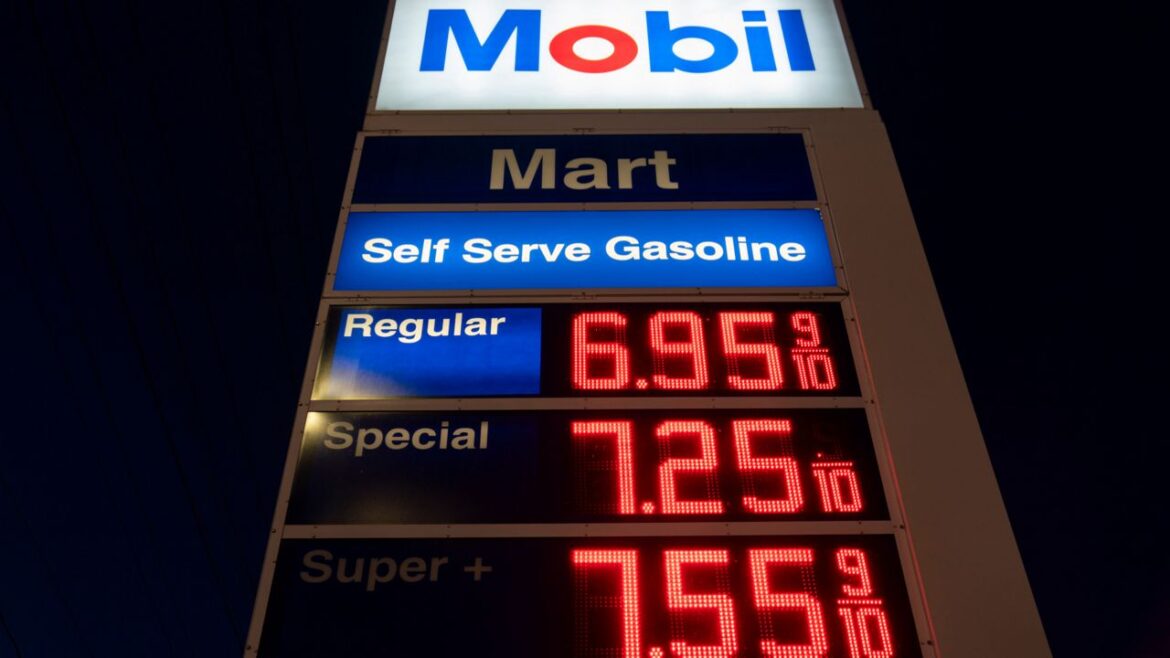 “U.S. consumer inflation reached an 8.6% annual rate in May, its highest level in more than four decades as surging energy and food prices pushed prices higher,” reports the Wall Street Journal. “The Labor Department said on Friday that the consumer-price index increased 8.6% in May from the same month a year ago, marking its fastest pace since December 1981. That was also up from April’s CPI reading, which was slightly below the previous 40-year high reached in March.” “May’s increase was driven by sharp rises in the “The CPI measures what consumers pay for goods and services.”

Inflation is much higher in the United States than in many foreign countries. The inflation rate is only 2.5% in Japan and Switzerland, notes economist Mark Perry.

Inflation in America may get even worse. Producer prices were “up 11.0 percent” for the most recent 12 months measured by the Bureau of Labor Statistics. That could mean an even higher inflation rate in the future, because the PPI is a “forward-looking inflation measure as it tracks prices in the pipeline for goods and services that eventually reach consumers,” according to CNBC. Inflation could rise to as much as 10% if the Federal Reserve does not act swiftly to tighten monetary policy.

If the Fed does tighten monetary policy to get inflation under control, that could plunge the U.S. into a temporary recession, the way tight monetary policy triggered a recession back in 1981-82. America’s economy is already fragile — the U.S. economy shrank in the first quarter of 2022, even as the economy grew in nations like Germany, which were harmed worse than the U.S. by the war in Ukraine.

If the Fed tightens monetary policy, it will have to do so enough to offset Joe Biden’s expansionary fiscal policy, which has increased the inflation rate. Biden’s big spending has fueled inflation, according to even Democratic economists like Larry Summers and Obama advisor Steven Rattner. As Rattner noted in the New York Times, Biden has spent “an unprecedented amount” of taxpayer money, which resulted in “too much money chasing too few goods.” Even progressive media like Vox recognize that Biden’s stimulus package “worsened inflation.”

In March, Biden signed an across-the-board increase in federal spending that will increase inflation even further. Last May, Biden proposed a record $6 trillion budget that “would push federal spending to its highest sustained levels since World War II” as a share of our economy, reported the New York Times. The Biden administration itself forecast budget deficits at more than $1 trillion for at least the next decade if his budget plan were adopted.

To deal with the high inflation of the Biden era, Senator Majority Leader Chuck Schumer (D-NY) suggested a tax increase. But raising taxes would also likely shrink the economy and deepen the coming recession that many economists predict.

Biden’s proposed “Build Back Better” plan would also lead to more inflation, according to economists across the political spectrum. Former Congressional Budget Office Director Doug Elmendorf said it will “push up” inflation. The Committee for a Responsible Federal Budget’s Marc Goldwein said it would create “inflationary pressures.” Bank of America’s Ethan Harris said it will “create even more price pressure.”The U.S. economy has recently underperformed many European economies, a shift from the Trump era, when the U.S. economy outperformed Europe, especially during the pandemic year of 2020, when Britain, France and Italy experienced much sharper economic declines than the U.S. The U.S. economy shrank 3.5% in 2020. The economy shrank much more in Europe: 7.9% in France, 9.9% in the United Kingdom, and 8.9% in Italy.

The real inflation rate using the market basket of key items from the Carter years is just under 17% – higher than at any time during the Carter years. And this is before the May data has been provided which will almost certainly be above 17%. This is a disaster equivalent to any of the World Wars.

You guys must hate the Youngkin tax cuts and spending increases. He just injected a bunch of new money into the system increasing inflation even more.

What about this statement Erica?

A governor or a President does not pass spending bills… he can veto them or sponsor a legislative package but spending or cutting is not the President or governor..
Plus you simpleton.. inflation is not in the purvey of a medium sized state like Virginia. It is due to the M2 money supply that was created in response to 2008 through the covid and Big Infrastructure bill last passed. AND the Fed QE.. and banking operations to keep their pals in Wall St flush. Go look at the charts for the M2 money supply… Jeanine here doesn’t like links.
And [email protected]## Virginia cannot deficit spend like your favorite pols in Washington do… What do you suppose inflation would look like if Nancy Piglosi and Bribem managed to pass their 3.4 trillion dollar Build Back Broker spending bill but for Manchin… BOO!!!
I guess if Virginia manages to spend within their budget… whatever… give the peasants a tax break… in the words of Hillary your Queen… At this point what does it matter?
Gas prices go up as you watch…

Edgar, tax cuts are stimulative. That is a fact. They represent money that Va was not spending (budget surplus) that will now be put back in circulation. That is inflationary regardless of who does it. But Conservatives are hypocrites, nothing new there.

Well… CONservatives as you say are hypocrites. Did you ever see them cut government spending or cut government like they say are going to do? No… you don’t. But for you… a person who supported no doubt the 3.4 trillion dollar Build Back Broker thing…. well… that too seems hypocritical. Did you see Nance Piglosi explaining how Congressional spending doesn’t cause a deficit… ?”So when we’re having this discussion, it’s important to dispel some of those who say, well it’s the government spending – no, it isn’t,” she continued. “The government spending is doing the exact reverse, reducing the national debt. It is not inflationary.”
Government spending is reducing the national debt… and its not inflationary. And she got wealthy through the cleverness of her husband… not insider information!
And like I said… so what… Virginia does not have to print money to fund its spending or tax cuts. It doesn’t have a currency that it inflated Erica…There’s not 20 trillion dollars worth of Virginia currency dumbass…That piddly little tax cut means nothing in that ocean of red ink…
Let the peasants have a few more dollars to spend Erica… come on man… in the words of your retarded President..

“But for you… a person who supported no doubt the 3.4 trillion dollar Build Back Broker thing…. well… that too seems hypocritical.”

Hey Erica .. pronouns She It, you were just telling us about all the swell jobs that Bribem created with his BIG infrastructure spending (and put in effect by the gang of GOP INC slim bags.,.. Turtle Mittsey, Murkowski, etc). Well it seems upon review, that they were created in the hospitality and tourism industries… Great Erica!!! Kings Dominion is hiring!!!!! But they aren’t open in the winter when the recession is coming. Oh and there’s this bad news Erica…
According to estimates by Bloomberg Economics, US households will spend $5,200 more this year than they did last year on the same consumption basket.
Bribem BOOM erica… that 5,200 is easily affordable isn’t it for you guys in the glow of the federal money land?
Well Erica… at least you have some good fantasy television on this week. The J6 Soviet Show Trials…

Nobody has a clue about the economic situation. The models have broken down and we are all in the great unknown. Economic models depend on predictability within reasonable limits. There are no living experts here but the smart money says more likely 1930s or worse. Biden will make Hoover look like a champ.

You are absolutely correct that they have no idea what is going to happen… Erica’s “experts”. Have you noticed how any stupid MSM uses Experts Say… Experts are full of crap in this clown show of a country… The real nasty thing is the debt levels. I don’t know how it relates to the Weimar Republic… how far the Mark of the time was inflated. But the know debt level is in trillions… tens of trillions. Then you have unfunded liabilities like SS and Medicaid… So much is uncharted territory… Erica’s favorite economy theory… being a liberal moron is called MMT… Modern Monetary Theory. It essentially says you can spend as much as you want and inflation will make your debt manageable. And those “Experts” can fine tune the whole thing… But now the inflation has become unruly and commodities and the nations that produce them along with manufacturing aren’t playing no more. The US is helping that along by the financial war on Russia. Another stupid thing from the DC clown posse…
I hope you are wrong about the 30s… because it could be even worse. The levels of debt both sovereign and personal were .001 of what you have today…

What is critical is that the federal government has separated itself from both the value of money and the taxes paid by the American citizenry. No matter how much taxes are paid, the fed just keeps disconnecting itself for them. Something like 40% of the budget is unsupported by tax revenues – and the situation will get worse.

“Government is the only institution that can take a valuable commodity like paper, and make it worthless by applying ink.” — Ludwig von Mises

I would have thought something messier.