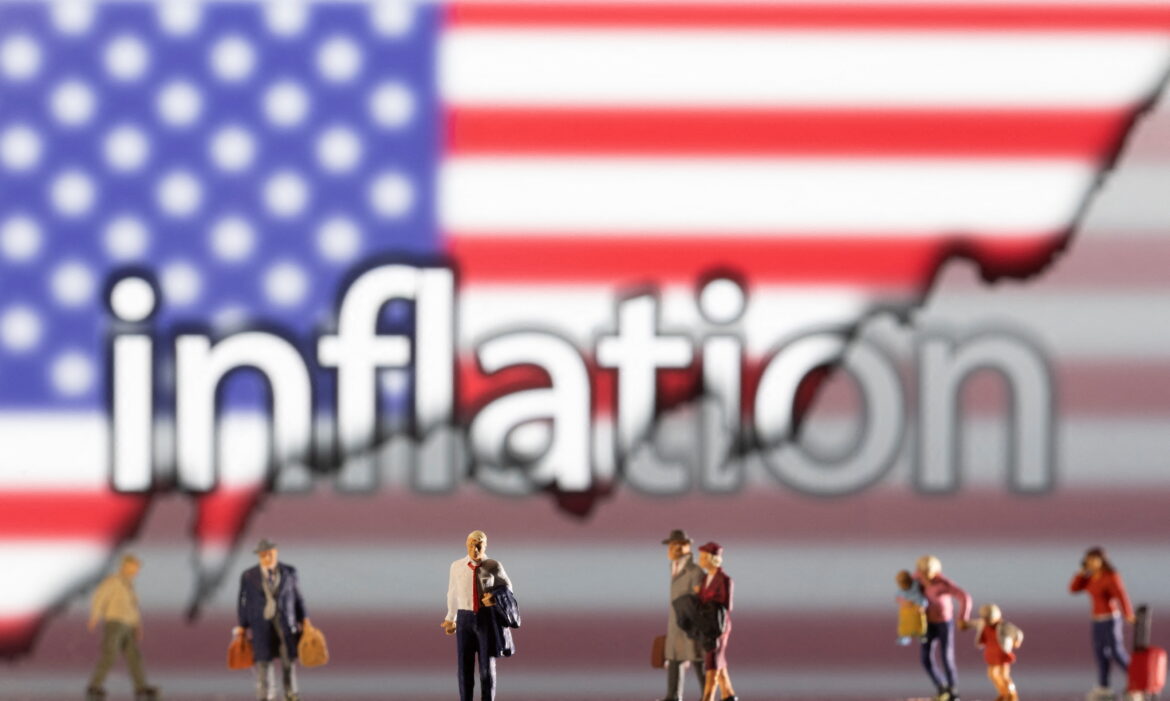 Inflation rises to over 9 percent, the highest level in more than 40 years

Inflation accelerated more than expected to a new four-decade high in June as the price of everyday necessities remains painfully high, exacerbating a financial strain for millions of Americans and worsening a political crisis for President Joe Biden,” reports Fox News.

“The Labor Department said Wednesday that the consumer price index, a broad measure of the price for everyday goods, including gasoline, groceries and rents, rose 9.1% in June from a year ago. Prices jumped 1.3% in the one-month period from May. Those figures were both far higher than the 8.8%” predicted by Dow Jones economists.

As Fox News noted, this is “the fastest pace of inflation since December 1981.” Moreover,

Price increases were extensive, suggesting that inflation may not be near its peak: Energy prices rose 7.5% in June from the previous month, and are up 41.6% from last year. Gasoline, on average, costs 59.9% more than it did one year ago and 11.2% more than it did in May. The food index, meanwhile, climbed 1% in June, as consumers paid more for items like cereal, chicken, milk and fresh vegetables.

In another worrisome sign, shelter costs – which account for roughly one-third of the CPI – sped up again in June, climbing 0.6%, matching an 18-year-high set in May. On an annual basis, shelter costs have climbed 5.6%, the fastest since February 1991.  Rent costs also surged in June, jumping 0.8% over the month, the largest monthly increase since April 1986.

Inflation in America may get even worse. Producer prices were “up 11.0 percent” for the most recent 12 months measured by the Bureau of Labor Statistics. That could mean an even higher inflation rate in the future, because the PPI is a “forward-looking inflation measure as it tracks prices in the pipeline for goods and services that eventually reach consumers,” according to CNBC. Inflation could rise to 10% or more if the Federal Reserve does not tighten monetary policy enough.

If the Fed tightens monetary policy, it will have to do so enough to offset Joe Biden’s expansionary fiscal policy, which has increased the inflation rate. Biden’s big spending has fueled inflation, according to even Democratic economists like Larry Summers and Obama advisor Steven Rattner. As Rattner noted in the New York Times, Biden has spent “an unprecedented amount” of taxpayer money, which resulted in “too much money chasing too few goods.” Even progressive media like Vox recognize that Biden’s stimulus package “worsened inflation.”

In March, Biden signed an across-the-board increase in federal spending that will increase inflation even further. Last May, Biden proposed a record $6 trillion budget that “would push federal spending to its highest sustained levels since World War II” as a share of our economy, reported the New York Times. The Biden administration itself forecast budget deficits at more than $1 trillion for at least the next decade if his budget plan were adopted.

To deal with the high inflation of the Biden era, Senator Majority Leader Chuck Schumer (D-NY) suggested a tax increase. But raising taxes would also likely shrink the economy and deepen the coming recession that many economists predict.

Biden’s proposed “Build Back Better” plan would also lead to more inflation, according to economists across the political spectrum. Former Congressional Budget Office Director Doug Elmendorf said it will “push up” inflation. The Committee for a Responsible Federal Budget’s Marc Goldwein said it would create “inflationary pressures.” Bank of America’s Ethan Harris said it will “create even more price pressure.”The U.S. economy has recently underperformed many European economies, a shift from the Trump era, when the U.S. economy outperformed Europe, especially during the pandemic year of 2020, when Britain, France and Italy experienced much sharper economic declines than the U.S. The U.S. economy shrank 3.5% in 2020. The economy shrank much more in Europe: 7.9% in France, 9.9% in the United Kingdom, and 8.9% in Italy.

Inflation rises to over 9 percent, the highest level in more than 40 years was last modified: July 13th, 2022 by Guest Contributor Hans Bader

” The dollar is being deliberately destroyed ” wtf are you talking about?

“But raising taxes would also likely shrink the economy” That is not true, the wealthy who would pay the tax (as well they should……2017 cuts should be reversed) will not change their spending one bit. Just like tax cuts didn’t help the economy……the rich didn’t spend more, they just socked the money away

You know what happened when the democrat run congress passed a wealth tax? The American boat manufacturing industry collapsed and has still not fully recovered. Somehow you think that the wealthy will sit there and do nothing but pay taxes. A typically stupid democrat idea.

“Somehow you think that the wealthy will sit there and do nothing but pay taxes” of course not/..they will continue to buy morally corrupt republicans. Do I care about companies that build $100 million dollar yachts? Sure…………..they can adapt to the tax

32 straight days that gas prices have declined, the national average is down to $4.553/gal, we’re nearing a 50c drop since June 14. The average fill up costs $6.50 less, Americans today will spend $183 million less on gasoline than June 14. We could fall under $4 by mid-August…

And on his last day unemployment was a whopping 6.3%. We are clearly much better off now.

Hey Cabron, Erica… Slow Joe knows about gas from Hunters deals in the Ukraine, doesn’t he pendejo? But you dimwit… what about the green energy? Joe is begging the Saudis to pump today and they have struck a deal to pump some of that green oil from Saudi Arabia, shtforbrains…
Every thought you have is just complete crap Erica… told you last year that Joe was gonna be pump pump pumping the oil… only Saudi Oil… and sure nuf.. to save the hypocritical Democrats. of whom you are a moron followers jobs… not gonna work though. They don’t have a capacity to pump that much more to bring prices down low enough to save the scum politicians that a moron such as yourself supports…

Per the EU, nuclear power and natural gas are now green energy. See how easy it is to wave a Political wand and redefine anything.

Bad fiscal policy is about to come home to roost in a great, big, gigantic, earth-shattering way. Grossly indebted nations are going to have violent revolutions and individuals everywhere are going to suffer. Told you so.

I have to agree that 9% is being kind,
it is much worse. Folks are paying much more and I would expect that their credit cards have growing balances. When these people cash out some equity to decrease monthly liabilities they will once again be paying more.
There is a bright side;
Folks have been apart from their extended family and friends for 4 years and coming back together over the summer. They will undoubtedly be discussing how much Joe Biden and the sucubuss Democrats have screwed up.
Let me just say it before a Democrat does;
Racism caused inflation, no wait
January 6th caused inflation.

At least Joe brought back ice cream, he’ll that’s even increased.
Joe Biden is not just a failure but a World Class Economic failure.

And his Sec of Energy.. Granholm I believe is her name had a press conference…. She is a lawyer not an engineer… which might be a nice degree for the Sec Of ENERGY… At the press conference, she was asked well how many barrels of oil does the US consume in a day… And her answer?
I don’t know the answer to that.
In the middle of an energy crisis, this idiot appointee due to her sex, not qualifications to do the damn job… but she’ll tell you all bout the green new magical world… The Bribem Fantasy world…

Ah Ole Jen,
All she knows is that
“A pipeline is the safest way to deliver fuel” as she said when the Eastern Pipeline was cyber attacked. I am willing to bet these same Democrats are profiteering from the price of fuel today.

Now to Mr Baders piece (nice job) says Chuck Schumer would like to raise taxes.
He along with inept Democrat Joe Biden always campaign saying;
“25 Million businesses don’t pay taxes” oh just how true is that statement?
These alleged businesses are small businesses S-Corps & LLC’s NOT sole proprietorships.
Many illegal aliens who have entered America illegally have since obtained work permits or visas. Now some of these illegals are operating the same S-Corps or LLC’s that Democrats & Joe Biden are claiming don’t pay taxes (deductive reasoning there) Yes Democrats & Joe Biden claim, no admit illegal aliens don’t pay taxes.
With Democrats & the Biden Administration’s constant blame of others and flapping of their mouths they allow all of America to see how moronic they are.

Yes Democrats & the Biden/Harris Administration are inept and untrustworthy and this is because of their own lack of education, integrity and morality.

Ultra MAGA brother bob is on target. The BIDENITES aren’t stupid, they are malevolent.

9% is just another government lie. Inflation is much worse when it comes to things needed for basic survival. The dollar is being deliberately destroyed and the Chinese communists are cheering.