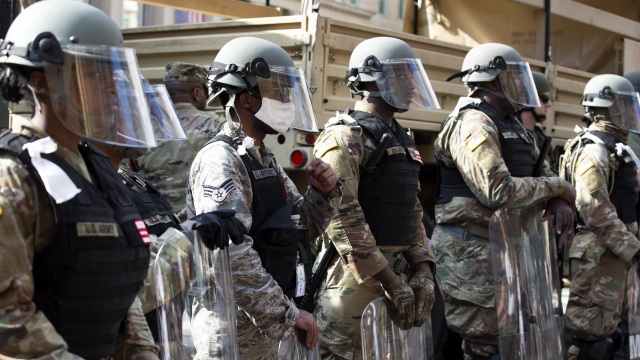 For purposes here, insurrection is defined as â€œA violent uprising or rebellion of citizens against their governmentâ€.  Under federal law, it is a crime to incite, assist, or engage in such conduct against the United Statesâ€.  Do the current protests and riots constitute insurrection.

The Insurrection Act of 1807 empowers the President of the United States to deploy the US military and federalized national guard to suppress civil disorder, insurrection and rebellion.  This Act is a major exception to the Posse Comitatus Act of 1878 which limits the use of the military for law enforcement purposes within the various States and on US territory.

The following conditions constitute the rationale for putting into place the provisions of the Insurrection Act:

While these words are enshrined in law there is obviously plenty of room for interpretation.  Thus, we see the differences of opinion between President Trump and Secretary of Defense Esper.

Has the Insurrection Act been used before â€“ absolutely.Â  Here is, at a minimum, the list of uses:

To quickly summarize, the Insurrection Act has been used by the Presidents of both parties, sometimes at the request of a particular State and sometimes not.  It has been used for a variety of reasons, but most recently for riots in major cities.  It is not in use at this time.

In regards to the current uprisings around the nation, no State has as yet requested federal help via application of the Insurrection Act provisions.  Because of political disputes, it is unlikely to be applied even though the situation in many cities is utterly lawless and deprives honest citizens of their constitutional rights.  (One key factor that argues against the use of the Insurrection Act is that peaceful protestors are interacting with insurrectionists.  Essentially, the protestors, whether knowingly or not, are providing cover for rioting, looting and murder.)

It appears that President Trumpâ€™s Insurrection Act warnings to cities and states is more in the nature of encouraging the governors and mayors to get behind their police, specifically using the State national guard to augment overburdened police forces.  The national guards may be needed because some of the big city Democrat mayors have â€œgone to warâ€ against their own police force and even threatened to eliminate them completely.  (All that has to happen is a Blue Flu epidemic, and the rule of civilized law will cease to exist completely.)

Note:  The above list was found on Wikipedia.  The definition of insurrection is compiled from a variety of sources.