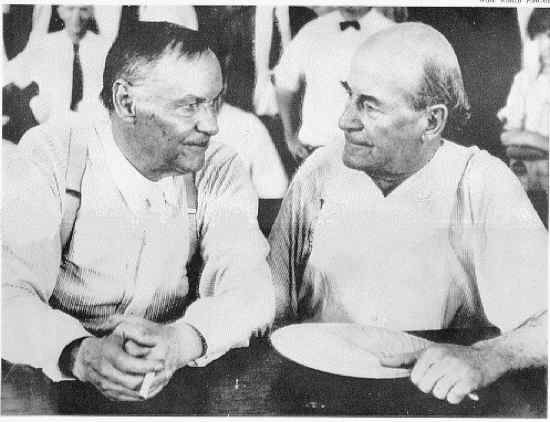 Clarence Darrow and William Jennings Bryan at the Scopes Trial, 1925

President Bush (43) sparked controversy when he declared that children should learn the different schools of thought on the origins of life. “Both sides should be properly taught…so people can understand what the debate is about,” he said, referring to the century-plus argument over Darwin’s theory of evolution, which has achieved the status of holy writ in public schools and universities.

For advocating academic objectivity (My god! Not that!) Mr. Bush took a rhetorical thumping like the one Harvard President Lawrence Summers received when he suggested that if women are not reaching the highest academic levels of science and mathematics it might be because their abilities therein are innately inferior to men’s. Both Mr. Summers’ and Mr. Bush’s views constitute rank heresy among the chattering classes.

Some wags joked that Mr. Bush might want to re-open the Scopes Monkey Trial – i.e., the sensational 1925 event in which celebrated defense lawyer Clarence Darrow debated evolution for seven days with three-time presidential candidate William Jennings Bryan. The trial was held to determine the guilt or innocence of John Scopes, a Tennessee schoolteacher who disobeyed a local law by teaching evolution. Before it ended, the trial had drawn a crowd of 5,000 spectators and international attention.

Mr. Darrow, for the defense, made a circus of the proceedings (things really haven’t changed very much), grandly arguing that “Scopes isn’t on trial! Civilization is on trial!” But he lost the central argument. His client was convicted and fined $100. Darrow requested the “guilty” verdict so he could appeal to a higher Tennessee court. He became a liberal folk hero for defending “science” against “ignorant religiosity.” (Tragically, Bryan died six days after the highly publicized trial ended.)

Following Mr. Bush’s remarks about evolution, columnist Charles Krauthammer criticized the president for trying to insert religious belief into the teaching of science where (he said) it does not belong. Mr. Krauthammer called evolution “settled science” and the “foundation of biology,” while admitting that it had “gaps.” Mr. Krauthammer had a medical education, so his views carry some weight.

I haven’t written much on evolution. Although I had some scientific education, I am not an expert in biology. Whole libraries of books have been written about Darwin’s theory by people far more qualified than I, so I thought it best to leave it to them. How much can one accomplish, anyway, in a short column-piece?

I reconsidered this view on two counts. First, because the issue has now entered the arena of popular discourse. Writers of opinion – not necessarily scientists – are declaiming on whether teaching religious beliefs alongside “scientific fact” is improper. This cannot go unanswered. My second reason relates to mathematics, which I do know something about. Accordingly, I’ll try to clear up some points here.

Modern journalists, educated after belief in evolution hardened into non-debatable dogma, tend to be very careless with the term fact. Many claim that evolutionary theory is so obviously supported by fact that doubters must be either ignorant, dishonest or crazy. But evolution is actually supported by very few facts. Darwin acknowledged that his theory was based on “inference and analogy.” He expected facts to follow, but they have not.

Darwin started by observing changes that could be produced by selective breeding of living animals – pigeons, for example, which he bred extensively to produce wide variations. Noting how much change could be produced in a short time, he then extrapolated backward to infer that changes made at a constant rate, through eons of time, must certainly have produced a progression of species.

But all of Darwin’s pigeon-breeding never produced anything except pigeons. There was no indication that another kind of bird – or an entirely different animal – might emerge. Similarly, the many varieties of dogs have been produced by selective breeding, over thousands of years, from a single species: wolves. All dogs – from Great Dane to Chihuahua to mongrel to wolf – can breed with each other. They are genetic variations, but they are all still dogs. That such variations have been observed is a fact, but factual support for cross-species evolution that Darwin projected has not appeared.

The fatal flaw in Darwin’s inferential reasoning is mathematical. He assumed that a constant rate of change in species must have occurred across eons, and was certain that present animals (and plants) came from earlier, simpler forms via random selection. But modern experiments have shown that Darwin’s assumption of a constant rate of change is incorrect. Change is fairly rapid at first. But soon it levels off, then reaches an insuperable limit. And the life-form remains true to type. All changes are from gene-selection.

For example, when botanists began to experiment with increasing the yield of sugar-beets, the sugar-content was only 6%. Over seventy-five years of selective breeding, scientists increased the sugar-content to 17%. But further efforts produced no additional increase. 17% was the limit. And they were still sugar-beets.

The fruit fly is also a favorite teaching-tool for demonstrating evolution. The fly reaches sexual maturity in five days, so several generations can be observed within an academic semester. By selection, red-eyed or green-eyed flies can be produced; also, white flies, flies with fuzzy wings, and other variations. But millions of students have never produced anything except fruit flies.

Evolution-devotees’ supreme quest has been to find proof in the “fossil record” that a species-crossover occurred somewhere in history. These are the “gaps” Mr. Krauthammer spoke of.  They remain unfilled. The facts Darwin expected are still missing. No trace of a “missing link” has ever been found. Occasionally a jawbone or fragment of a hip, etc., has been eagerly proclaimed as evidence of the long-sought link between apes and humans. But these hopes are inevitably dashed by additional discoveries which trace to one species or another, never to an intermediate. Often the original report stands uncorrected, leading students to believe, mistakenly, that a missing link was actually found.

The fossil record consistently contains fully formed organisms. Variations may cluster around a “mean,” but the transitional stages Darwin expected aren’t there. Some famous discoveries thought to be missing links, like Piltdown Man – supposedly a primitive ancestor of man whose skull was found in England in 1912 – turned out to be frauds. 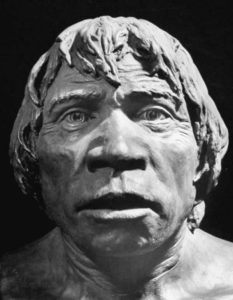 This is not a comprehensive treatise, so I shall pass over “favorable genetic mutations” – another pillar of evolutionary theory. I merely note that changes sufficient to transition across species would require not just selection of recessive genes (cf. fruit fly experiments), but a string of favorable genetic mutations whose probability of occurrence is minute beyond comprehension.

This mathematical reality informs a new biological construct known as “irreducible complexity” – postulated in 1993 by Michael Behe, a Lehigh University professor of biochemistry. Dr. Behe explains his theory using the mousetrap as a model. The device, he points out, cannot be assembled gradually. You can’t start with just a wooden platform, catch a few mice; add a spring, catch more mice; add the hammer, etc. – each new addition making the device more effective. Unless the trap is fully assembled, with all essential parts in place, it won’t function at all. It is irreducibly complex.

Most organisms are like this. They must have all their parts in place, fully functional, in order to survive. Thus, a fish which happened to develop lungs would drown. To live on land it would need all the other parts of a land creature, too. Just the lungs would not do.

The eye is a classic example of irreducible complexity. It is complex beyond the understanding of all but the most highly educated scientists – and barely so for them. The organ is useless unless all of its parts are fully formed and functional. The slightest alteration from its correct form destroys its functionality. How could it possibly evolve by slight alterations over time? Even though less understood in Darwin’s era, the eye was cited then as proof against his theory. Contemporary Darwinist Richard Dawkins describes the sequence of improbable steps needed for the eye to evolve:

“…[start] with a light-sensitive spot and [move] to a group of cells cupped to focus light better; and so on through a graded series of small improvements to produce a true lens. But, as Behe points out, even the first step – the light-sensitive spot – is irreducibly complex, requiring a chain reaction of chemical reactions starting when a photon interacts with a molecule called 11-cis-retinal, which changes to trans-retinal, which forces a change in the shape of a protein called rhodopsin, which sticks to another protein called transducin, which binds to another molecule…and so on. There are dozens of complex proteins involved in maintaining cell shape, and dozens more that control groups of cells. Each of Darwin’s steps is itself a complex system. Adding them together doesn’t answer where they came from…” (italics added)

Indeed, nothing in Darwin’s theory explains how irreducibly complex organisms came into existence. Only the theory of intelligent design can account for them. Darwin, himself, realized that irreducible complexity could crash his theory: “If it could be demonstrated that any complex organ existed which could not possibly have been formed by numerous, successive, slight modifications, my theory would absolutely break down.”

Scientists not married to evolution by financial or career considerations are beginning to agree that irreducible complexity expresses the theoretical breakdown Darwin predicted. The probability of the eye developing spontaneously has been estimated at 1 chance in 10123 (i.e., 1 with 123 zeroes following) – a probability of essentially zero. The gigantic denominator far exceeds the number of nanoseconds in the postulated age of the universe (i.e., 3.15 x 1026) or the number of molecules in the universe (i.e., ~1078).

Many scientists now say they can more easily believe that the eye was designed by a “creative intelligence” than that it developed by chance with such an infinitesimally small probability. (One said it is easier to believe that an explosion in a print-shop produced the Bible than to hang onto Darwinian Theory quantified at these probabilities.)

An automated factory with its computers, robots and machinery all timed and coordinated is less complex than the workings of a single cell. That scientists did not comprehend this in Darwin’s time is one reason why his theory gained acceptance. That people making decisions about education do not comprehend this now is why the theory still hangs on.

All this barely scratches the surface, but it shows that evolutionary theory has serious problems, at least mathematically. It cannot be considered “settled science” with such objections unanswered. Schoolchildren should know this. Adults should, too. 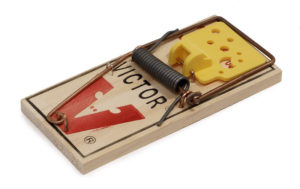