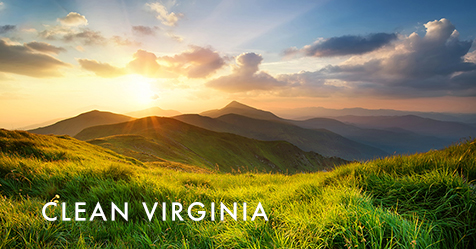 The Virginia Public Access Project has updated its list of largest campaign donors in Virginia, and the results making good reading. 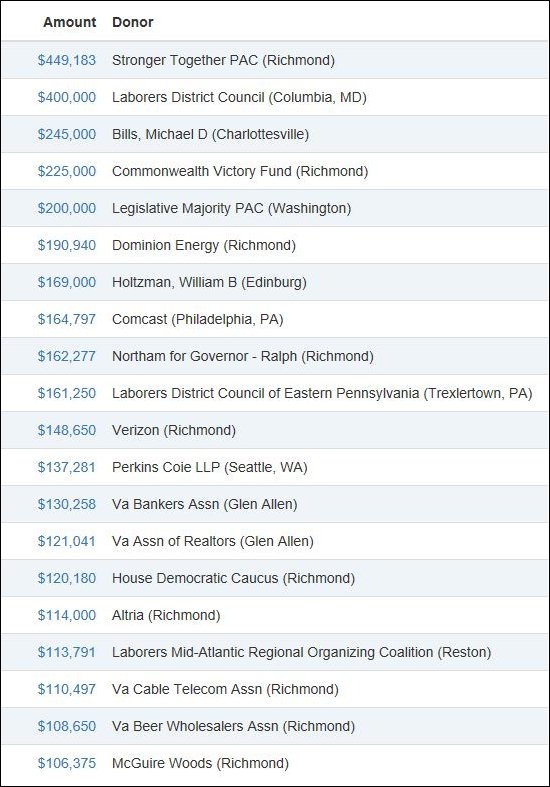 My money is cleaner than yours. Perhaps the most fascinating tidbit is that Charlottesville-based Michael Bills, founder of Clean Virginia and scourge of Dominion Energy Virginia’s influence on state politics, has injected more money into the political system than Dominion has so far in 2018-2019. Bills donated $245,000 while Dominion contributed $190,940. (The Dominion number does not include personal contributions by Dominion executives. CEO Thomas Farrell, for example, has given $7,500 so far. Dominion executives Paul Koonce and William Murray chipped in $5,000 and $4,500 respectively. Still, Bills managed to give more than Dominion’s PAC and executives combined.)

Clean Virginia’s mantra: “In Virginia, corruption is legal, and it is time for that to end.” Clean Virginia’s solution: The organization out-bids its sworn enemy for the loyalty of Virginia legislators.

To my mind, the most fascinating untold story in Virginia politics today is the rise of Charlottesville’s landed aristocracy as a bankroller of liberal and Democratic Party causes. Virginia’s horse country gentry helped lefty Tom Periello nearly unseat moderate Ralph Northam in the 2017 Democratic Party nomination for governor. I view Bills’ Clean Virginia initiative as a continuation of that momentum.

Speaking of big money… Democratic PACs and allied groups totally dominate the list of largest donors. These include the Stronger Together PAC, which raised money for Northam’s campaign; the Laborer’s District Council, which gave heavily to the Northam campaign; and the Commonwealth Victory Fund and the Legislative Majority PAC, two Democratic Party-aligned groups.

The biggest GOP-leaning donor was William B. Holzman, a Shenandoah Valley oil and gas distributor. Collectively speaking, Virginia’s big businesses — Dominion, Comcast, Verizon, Altria, and the Realtors and Bankers associations — lean to the GOP but they spread their money between both parties. If political power in the General Assembly shifts to the Democrats, the corporate money likely will follow.

How will the media cover this story? As far as I can tell, only David Ress with the Daily Press has reported on the latest VPAP numbers. His focus, unsurprisingly, was Dominion — although he took a man-bites-dog angle on the story, noting that the utility is not the biggest campaign contributor this year. I’m waiting for the media to start showing the same level of interest in the other big-money players as it does in Dominion. And don’t get me started about all the “dark money” sloshing around the system. I’ll save that for another day.

Postscript: By the way, U.S. Senator Tim Kaine is out-raising Republican Corey Stewart by a ratio of about 17 to one. Clearly, Virginia’s moneyed class is avoiding the Trumpier-than-Trump candidate like the Ebola virus. Worse for Stewart, he’s even losing the small-donation race (less than $200) by a margin of about three-to-one. This race will be a wash-out. The Virginia GOP looks like it’s in huuuge trouble.

Irony? Ok. here is my take on Irony. The Republicans in the US House, Senate, and White House are spending at a rate that will somehow bankrupt this country. It will not be SS or Medicaid that does us in, but Republicans. But, in November our system will likely make a correction before Ryan, McConnell, and Trump destroy the US dollar. That correction will be the Democrats taking the House and maybe the Senate. What’s ironic is Pelosi will be speaker again, and she will then “liberate” us from the Republican spending before they can bankrupt the country.

Its pretty bad when a like liberal Pelosi has to save the country from so called Republican conservatives.