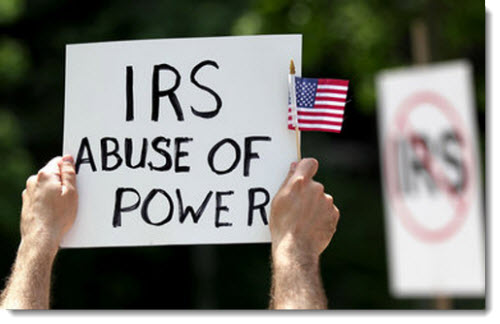 Government officials take an oath of office to protect the securities of the American people, contractors do not. Yet for some of our most sensitive tax records and information, the Internal Revenue Service (IRS) has employed third party contractors to pursue investigations; the IRS has manipulated the law and politicized our agencies as a result.

Our critical tax payer information and records should only be handled by the government agencies which are indebted to the American people’s trust.

Dr. Leslie Robinson, an accounting professor at the Tuck School of Business at Dartmouth College is not one of those people. Dr. Robinson was hired by an unnamed government agency to write a report on the various tax standards pertaining to the federal investigation into Caterpillar.

According the New York Times, who also reviewed the leaked report that Caterpillar themselves have not received access to, Dr. Robinson spent over 200 hours reviewing the investigators evidence for the government. Dr. Robinson has seen every single available document to the case agents assigned to the investigation into the construction company, Caterpillar, for tax and accounting fraud. Yet her report was been leaked by the media to discredit the companies positive attributes the President has been attempting to highlight.

This leaked report meant to embarrass a company that President Trump recently praised was illegally leaked for political purposes, but what it reveals was that a federal agency, unnamed at the moment, apparently shared tax information with a Dartmouth College professor to go after Caterpillar. This continuation of the left’s use of the government as a political weapon almost two months in to the Trump presidency is beyond troubling.”

Dr. Robinson was able to produce an 85-page analysis on Caterpillars actions, using a mixture of publicly available and internal financial data from the company, as well as bank data tracking wire transfers from Switzerland into the United States. A government agency provided a private citizen with significant autonomy over a corporation’s financial information, a practice which Congress has directly tried to prevent through legislation demanding confidentiality for government documents.

So how can a government agency release information regarding individual companies taxes to a private citizen?

By manipulating a law about photocopying.

26 U.S. Code 6103 allows non-clearance granted individuals to handle paperwork “to the extent necessary in connection with the processing, storage, transmission, and reproduction of such returns and return information, the programming, maintenance, repair, testing, and procurement of equipment, and the providing of other services, for purposes of tax administration.”

This provision was made so an intern can make a photocopy, file a paper, or fix a computer wire without wearing a blindfold, not so a university professor could assist a federal investigation.

But nonetheless the IRS created their own regulation to grant themselves the power to use contractors. Regulation § 301.7602–1T Examination of books and witnesses provides individuals granted permission by the agency the ability to “receive and examine books, papers, records, or other data produced in compliance with the summons and, in the presence and under the guidance of an IRS officer or employee, participate fully in the interview of the witness summoned by the IRS to provide testimony under oath.”

And since May 2014 the IRS has hired outside firms to assist in income tax audits and corporate investigations; paying the Quinn Emanuel law firm $2.2 million to perform duties the department would normally handle privately.

The reason our lawmakers wanted only trusted government officials to have sole access to this data is simple, our most crucial financial information should be private and nonpartisan; in the wrong hands this information can be used as a tool for corruption and political manipulation.

This is exactly what happened to Caterpillar; it is no surprise the report regarding the companies tax investigations was mysteriously leaked just days after the corporation received public praise from President Trump.

Despite clear confidentiality clauses, executive agencies like the IRS appear to have taken these investigations into their own hands and politicized the release of information. Reining in executive agencies to return to their purpose, rather than politics is a necessity.

In 2015, Senator Orrin Hatch (R-Utah) highlighted the problem in a letter to the IRS Commissioner John Koskinen, explaining that “In a tax system based on voluntary compliance, the integrity of the tax administration process and protection of taxpayer rights is of paramount importance. To those ends, Congress put in place specific restrictions on government action in the examination process.”

Transparency is necessary to democracy. We deliver information on taxes to the government with the expectation that the information is being secured and utilized properly. When agencies give taxpayer data to a third party and then it winds up in the newspaper they violate the critical trust between the people and their government — and the spirit if not the letter of the law. The IRS is not just being political, they are dismantling our political system.

Wait! I keep hearing that abortions are legal because the Constitution says we have the right to privacy. Personally, I can’t find that particular phrase, but we’ve all been assured it exists and that it guarantees us the right to abort, among other things. Apparently, one of those “other things” is not the right to have your private financial information remain private, although that concept absolutely does appear in the construction.

If those within our government continue to remain loyal to Obama while sabotaging Trump, they should all be fired. Every president, whether democrat or republican, and whether you like him or not, deserves the loyalty of the federal workers. Traitors should be treated as such.