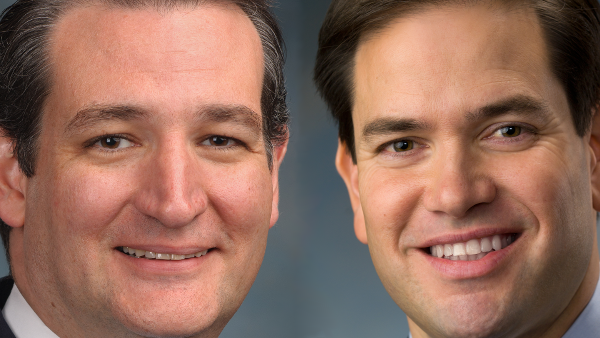 Is a Rubio-Cruz Ticket, the only Way to Stop Trump?

It’s time for a Rubio-Cruz ticket to stop Trump.  It may be our only hope and Jonah Goldberg is proposing it in this column.  If Cruz and Rubio can come to some kind of agreement prior to Tuesday, and get voters on board, they could change Tuesday’s outcome in a big way. But I had another thought. What if Rubio promises to nominate Cruz to the Supreme court? Everyone seems to think Cruz would be a brilliant Supreme Court Justice.  Would that be enough for Cruz to drop out and throw his support behind Rubio?

Is a Rubio-Cruz Ticket, the only Way to Stop Trump? was last modified: February 27th, 2016 by Jeanine Martin

Rubio can’t win. If you put him at the top of the ticket, we lose the White House.

Will stay home before I cast a ballot for Mister Amnesty – Gang of 8 Rubio. Cruz I would consider, but not that POS Rubio.

What does dreaming of a Rubio/Cruz alliance do? Well for one thing, Cruz supporters will head for Trump. Other voters will still vote for Cruz because he is on the ballot. Dead votes in the trash. If you can’t stand voting for Trump, you should do the next best thing for the party. Ballot for Bernie. Because the alternative is worse than Trump? Or is it? Your choice on Tuesday.

I’m so glad that the Huckabees have joined the Trump campaign,

JW, whatever are you talking about?

And I should be ashamed of what?

Are you advocating that Virginians vote for Marco Rubio on Tuesday?