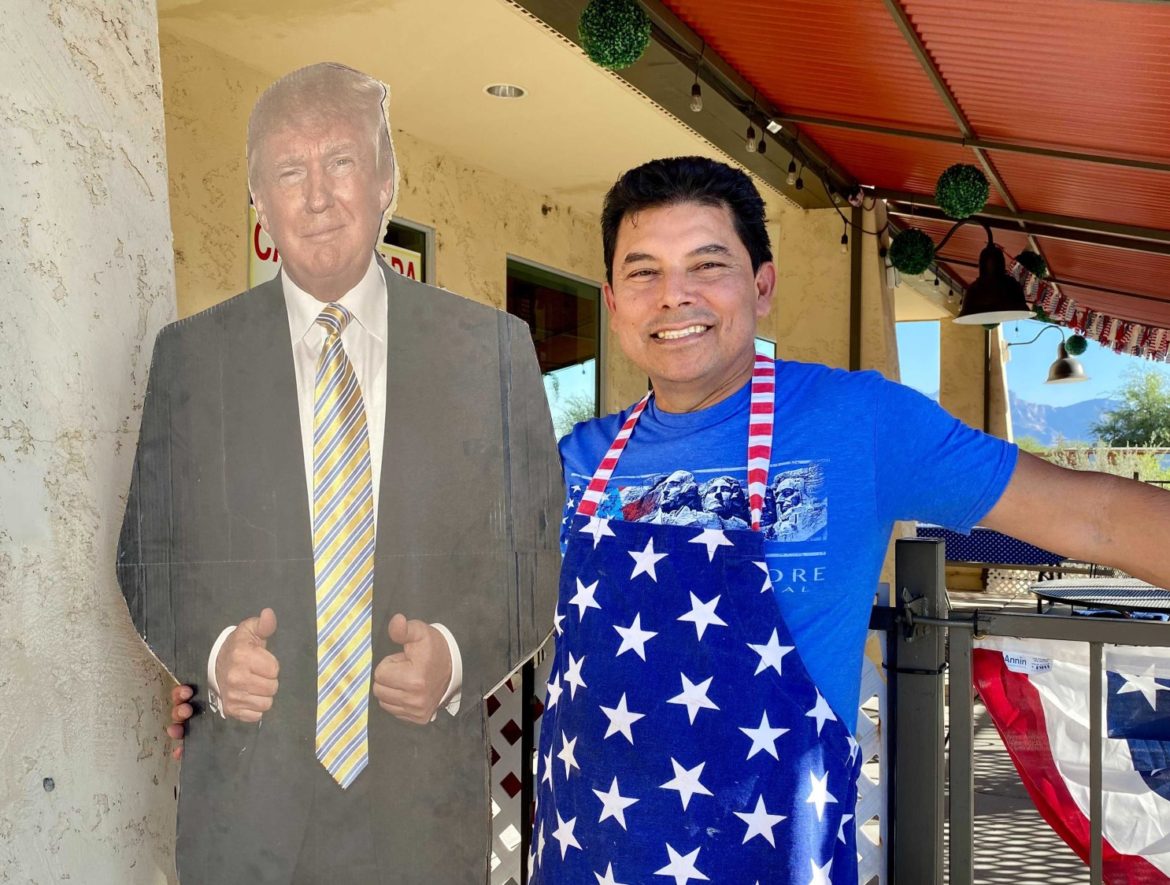 A Latino business owner in Arizona with a cardboard cutout of President Trump, who got 32% of the Hispanic vote in 2020

Is getting more blacks to vote GOP worth the effort?

Former President Trump made the most heroic effort to get the African-American vote behind him than any Republican president in recent history —  including prison reform changes and the 2017 tax plan that created tax incentives for investment in inner cities.

The â€œBlexitâ€ movement also gave a lot of hope to GOP activists, hoping to break the Democrat stranglehold on black voters.

However, he won the 2nd highest Latino vote of any Republican presidential nominee since George W. Bush in 2004 – – 32% — despite Trumpâ€™s get-tough stance on immigration and use of language the media and Latino leaders felt disparaging

According to the May 19 liberal blog, VOX:   â€œIt was clear after the election that Trump had made gains among Latino voters in places like Floridaâ€™s Miami-Dade County and Texasâ€™s Rio Grande Valley. The newest and most detailed data yet shows that the trend was nationwide. According to a recent report by the Democratic data firm Catalist, the number of Latinos who cast votes increased by 31 percent from 2016 to 2020, accounting for a 10th of the electorate. A comfortable majority of Latinos â€” an estimated 61 percent â€” supported President Joe Biden, but there was about an 8 percentage-point swing toward Trump, based on data on votes cast for either the Democratic or Republican nominees in 2016 and 2020.

â€œThe data shows that many Latino voters, who represent the fastest-growing share of the electorate, are not firmly part of the Democratic base. Instead, they seem to be persuadable voters, presenting a potential opportunity for both Democrats and Republicans. This is especially true for voters who arenâ€™t hyperpartisan: new and infrequent voters, as well as people who flipped their votes in 2020 or who decided to sit the election out entirelyâ€¦â€

I believe this data should give marching orders for our GOP slate of Glenn Youngkin, Winsome Sears and Jason Miyares to make inroads into the growing Latino community of Virginia, and really spend some money and manpower on it. This means substantial voter outreach through door knocking and calling.  We donâ€™t need to just hire Latino kids out of college to attend church services and picnics; putting our activist volunteers into these neighborhoods will bear fruit, too.

Our party has a diversity problem given the growing non-white population in the nation and for too long, candidates have catered to the narrow conservative mostly-white base to try to win primaries and then face a big divide trying to persuade general election voters.  Our recent convention was a missed opportunity to bring new blood into the party

Pew Research last year did an extensive profile on the Latino vote in the U.S., which is now larger than the African American vote — some 32 million eligible voters as of 2020.  In Virginia, only 5% of Latinos are eligible to vote, meaning a universe of 300,000 voters.  An additional 5% of Virginia voters are Asian, Pew reports â€“ another group that should be voting more GOP but is not.

I found no equivalent data about the extent of African American voters in Virginia except a 2016 U.S. Census article,   which says the eligible black vote in our state is about 19.5%, which would be 1.1 million.  That does not mean all are registered.

In contrast, if we garnered Trumpâ€™s share, 32% of the REGISTERED Latino vote, that comes to 96,000 votes.   And we know that turnout in gubernatorial elections in Virginia is about 40 to 50% of registered voters.

Pew reported in 2020 that African Americans are more motivated by the race issue to vote Democrat, more included to support massive government intervention and criminal justice reforms.  In other words, they are a tough nut for Republicans to crack.

While Latinos in Virginia support and rely on government services, too, they are very entrepreneurial and thus more receptive to conservative policies championing less regulation and lower taxes.  Latinos, like blacks, suffered more disproportionately from the Democrat-instituted COVID lockdowns and from death from the virus itself.  Latinos, who are predominantly Roman Catholic, tend to oppose abortion and traditional values, and what we conclude from the Democratsâ€™ analysis of 2020, strong borders and policing.

This Wall Street Journal column states: â€œThe Democratsâ€™ focus on progressive priorities cost Democrats support among blacks, Asians and especially Hispanicsâ€¦.In the summer, following the emergence of â€˜defund the policeâ€™ as a nationally salient issue, support for Biden among Hispanic voters declinedâ€¦The decline that we saw was very large. Nine percent or so nationwide, up to 14 or 15 percent in Florida. Roughly one in ten Hispanic voters switched their vote from [Hillary] Clinton to Trump.â€

I also believe the Latino and Asian vote is less prone to peer pressure to vote Democrat.  A number of Black Republicans have acknowledged to me that it is very difficult for blacks to vote GOP due to  pressure, regardless how the welfare state and Democrat Party has failed them.   Plus, African American voters are ultra-sensitive to racial stereotyping and images.

I am not saying Youngkin & Co. should not court black voters, but the Latino vote will bear more fruit.

Is getting more blacks to vote GOP worth the effort? was last modified: June 7th, 2021 by Guest Contributor Ken Reid

Both constituencies are worth the effort, but the Hispanic constituency will yield more votes in the long run. The Hispanic percentage of the population will continue to increase while the Black percentage has dropped precipitously over the decades. Currently, the Hispanic vote is open to persuasion–the rule of law, safety, traditional family, respect for others, hard work and pursuing economic opportunity are all Republican tenets that will resonate.

Probably not Ken. Critical Race Theory…Gonna Put Y’all Back IN CHAINS!!!… Reparation Promises, Affirmative Action, Government Contract Set Asides, Fixation on Identity Politics… Making sure that Inner City Youth don’t go to jail… letting the out of jail… the elaborate political machines that grift hard in places like Philly, Atlanta, Chicago… Richmond that are controlled by black politicians… welfare states and more welfare promises… and trillions of dollars of “stimulus” that will end up in the pockets of corrupt politicians like Maxine Waters, Lori Lightfoot, the politicians in Atlanta, Richmond Norforlk etc…

The Democrats know what they are doing!

So you probably cannot beat that for more than 8 percent of sane black voters.

The Hispanics may be turning on them… it is hard to tell. But once the hispanic machines are cemented into the Democrat party… see above. One thing is for sure. The GOP of old… the guys in khakis, weejuns and Brooks Brothers button down shirts are not going to be the future.

Having talked to both Black and Latino Republicans, the answer is quite obvious..

This is a joke, right?

The message of the Republican Party to Latinos is: “You all are rapists, murderers, and drug dealers. You are vermin. “