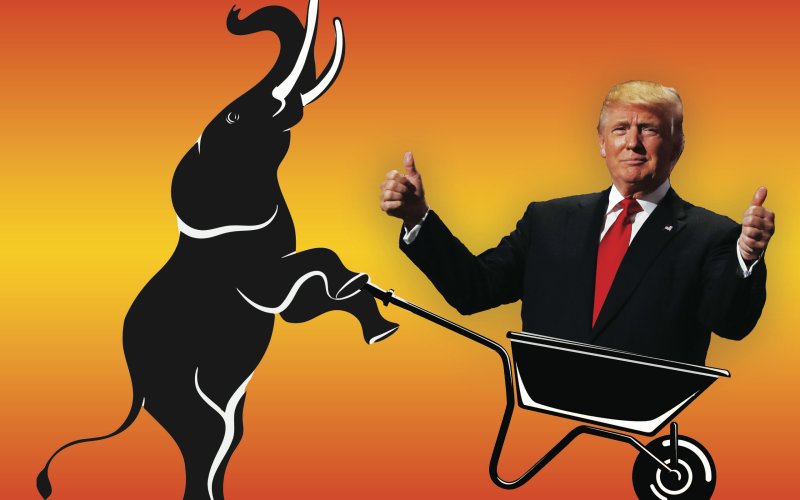 Is it Time for Trump to Step Down? What Happens if He Does?

Yesterday a video surfaced from 2005 where Trump made disgusting, crude, stupid, remarks about women.  For many in the Republican Party this was the last straw even though Trump has apologized.

On Saturday Trump was to appear in Wisconsin to campaign with Governor Scott Walker and Paul Ryan.  Trump’s invitation to Wisconsin has been cancelled by Paul Ryan. Ryan said,

I am sickened by what I heard today,” women are to be championed and revered, not objectified. I hope Mr. Trump treats this situation with the seriousness it deserves and works to demonstrate to the country that he has greater respect for women than this clip suggests.”

Other Republicans were quick to condemn Trump’s words,

These comments are repugnant,” Senate Majority Leader Mitch McConnell said. “As the father of three daughters, I strongly believe that Trump needs to apologize directly to women and girls everywhere.”

“are beyond offense and despicable.”

“I’m out. I can no longer in good conscience endorse this person for president. It is some of the most abhorrent and offensive comments that you can possibly imagine.”

“for the good of the country, and to give the Republicans a chance of defeating Hillary Clinton. Mr. Trump should put the country first and do the right thing.”

Congresswoman Barbara Comstock also asked Trump to step aside and allow Mike Pence to be on the top of the ticket. Sen. Mark Kirk of Illinois has said he will not support or vote for Trump.

A prominent Trump supporter Jon Huntsman, former governor of Utah, has said Trump should step down and let Mike Pence replace him on the top of the ticket. Huntsman said,

In a campaign cycle that has been nothing but a race to the bottom — at such a critical moment for our nation — and with so many who have tried to be respectful of a record primary vote, the time has come for Governor Pence to lead the ticket,”

I’m horrified by #TrumpTape news. @realDonaldTrump campaign is a poisonous mix of bigotry & ignorance. Enough! He needs to step down.

Senator Mike Lee has also called on Trump to step down here.  Senator Lee said in a video:

I respectfully ask you, with all due respect, to step aside. Step down, allow someone else to carry the banner of these principles… rather than weighing down the American people…You, sir, are the distraction. Your conduct, sir, is the distraction.”

So what happens if Trump does step down?  First, Pence does not automatically assume the nomination for President.  The Republican National Committee has the job of choosing a replacement when a candidate drops out due to “death, declination, or otherwise”. The committee could call another convention or let the 168 members of the RNC choose a new candidate by majority vote.  From Yahoo Finance:

In the latter scenario, each member would get a certain number of votes based on the population of the state they represent….(Charles) Aull said this is much more likely, because reconvening another convention would be a logistical nightmare. And at this point, we’ve probably run out of time for another one, anyway.

Choosing Mike Pence would be likely but not certain. It’s all up to the RNC. Read updates on the story here.