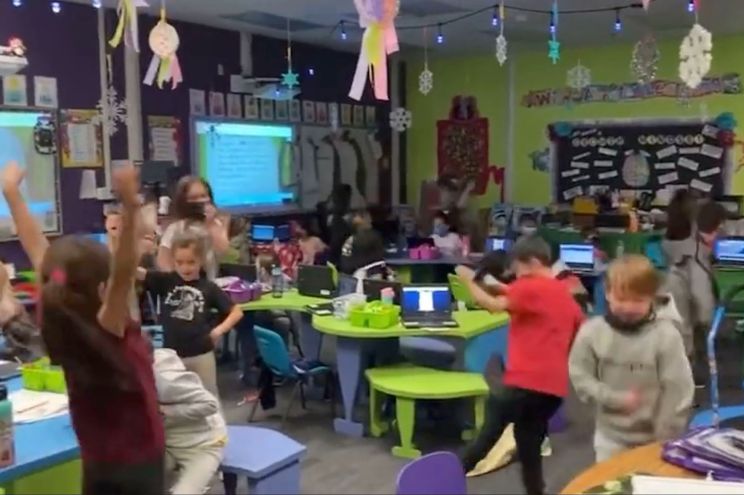 Las Vegas school children cheer the end of mask mandates. We're all tired of this COVID crap, aren't we?

Is it time to â€˜endâ€™ the COVID pandemic?

As we approach 2nd anniversary, and tire of lockdowns and mandates, perhaps the WHO can downgrade this to an â€˜endemicâ€™ or Biden can end the national emergencyÂ

As I look at the data on COVID 19 now, and as we are about to observe the 2nd anniversary of this pandemic, I believe itâ€™s time for the World Health Organization (WHO)  WHO to declare it over, or, downgrade it to â€œendemicâ€ or â€œepidemicâ€ status.

And, President Biden can declare the national emergency over with when he does his State of the Union Address March 1 â€“ although he extended it for the 8th time in January.

WHO is the UN agency, along with our Centers for Disease Control, that over relied on the â€œassurancesâ€ of the Chinese Communist government in Beijing that they had it under control back in January 2020.Â  As such, WHO didnâ€™t declare COVID 19 a â€œpandemicâ€ until March 11, 2020. WHO and the CDC seem to have ignored the fact China has been the source of the major pandemics of the last 100 years, including the 1918 so-called â€œSpanish flu,â€ which killed about 50 million worldwide.

According to this article by the Columbia University School of Public Health: â€œThe WHO defines pandemics, epidemics, and endemics based on a disease’s rate of spread. Thus, the difference between an epidemic and a pandemic isn’t in the severity of the disease, but the degree to which it has spread.â€

In fact, New Jersey Democrat Governor Phil Murphy Feb 7 used these classifications when he ended the mask mandate for public schools effective March 7. â€œWe have to learn how to live with COVID as we move from a pandemic to the endemic phase of this virus,â€ he said

â€œLearn to live with COVID? â€œ That was heresy when noted scientists like Marty Makary of Johns Hopkins â€“ now an adviser to Gov. Glenn Youngkin â€“ and Jay Bhattacharya at Stanford Medical School proposed that months ago.

Indeed, the governors can cite science â€“ i.e., declining Omicron variant rates â€“ for their rationale, but itâ€™s really political science that has been the underlying rationale for many COVID â€œmitigationâ€ efforts by the federal, states and local governments.

Democrats know they are pretty doomed in the fall midterms, primarily due to inflation, food shortages, a botched foreign policy in Afghanistan, and a roller coaster stock market that is wreaking havoc on votersâ€™ retirement plans.  There has been a revolt against vax and mask mandates;  the U.S. has only a 65 percent vaccination rate (at least 2 doses), which ranks low among nations.

Of course, WHO, CDC and COVID Czar and Media Star Anthony Fauci are never going to listen to conservatives who have been against lockdowns, mask and vax mandates from the get go â€“ nor the good scientist/M.D.s at Stanford, who have led the charge, and the thousands of epidemiologists and virologists who signed the Great Barrington Declaration against broad-based lockdowns.

No, they will be reading what the liberal establishment says and does, but while I am not a public health expert, I am a journalist who has covered these various pandemics since 1986, and I see the facts as follows for why this pandemic should be downgraded:

I donâ€™t mean to minimize COVID deaths and resulting conditions among people who recovered. This is a dreadful disease for those who get it and are hospitalized â€“ especially for those who refused to be vaccinated and have underlying health conditions like diabetes, heart disease and obesity.

But as I read the data, and the political tea leaves, I think there is sufficient science to downgrade the pandemic and end the U.S. national emergency.

One of the Trump administrationâ€™s rationales for instituting the â€œ15 days to slow the spreadâ€ (updated to 30 days) was what they witnessed in Italy with COVID patients not being able to find ventilators.  Then, there were models from University of Washingtonâ€™s Institute for Health Metrics and Evaluation (IHME), which projected the number of new COVID cases.

The modeling was frequently criticized for being too optimistic or too pessimistic.Â  Â For example, in December, IMHE predicted 3 billion Omicron cases worldwide by this month â€“ in other words, half the planet would be sick.Â  Well, going back to Reuters the number is more like 395 million TOTAL cases, all variants. Â Â

A number of scientists say actual COVID positives could be much higher because millions more could have antibodies that COVID diagnostic tests donâ€™t pick up.Â  This means the percentage of deaths is lower than 1.5 percentÂ

And, can we believe the numbers when weâ€™ve known since the get-go of the crisis in March 2020   that some 90% of Americans who died from COVID had â€œcomorbidities,â€ meaning underlying health problems like heart disease, diabetes or respiratory illnesses.  In addition, some 75% of COVID deaths occurred among those over 65 and 78% of hospitalized people were obese, according to CDC.

WHOâ€™/CDC reporting guidanceÂ  on what constitutes a COVID mortalityÂ has often counted deaths due to COVID,Â Â

CDCâ€™S Vital Statistics Reporting Guidance,Â  which is based onÂ  WHO guidance,Â  reads: â€œIf COVIDâ€“19 played a role in the death,Â  this condition should be specified on the death certificate.Â  In many cases,Â  it is likely that it will be theÂ  UCOD, as it can lead to various life-threatening conditions, such as pneumonia and acute respiratory distress syndromeÂ  (ARDS). â€œ

That sure reads like carte blanche for providers to report a case as a COVID death even if the person had other deadly conditions.

In addition, is there a financial incentive for health care providers to report COVID as a cause of death â€“ â€œThe coronavirus relief legislation created a 20% premium, or add-on, for COVID-19 Medicare patients,â€ USA Today reported after the initial COVID rescue package was passed by Congress in March 2020.    However, the newspaper reported: â€œThere have been no public reports that hospitals are exaggerating COVID-19 numbers to receive higher Medicare payments.â€  About $171 billion had been appropriated to hospitals as of September 2021, Kaiser Health News reported

Conservative media has jumped on this issue since the pandemic began, but recently, CNN did a spot on the reporting criteria and questioned whether the COVID mortality numbers are juiced Â Â

Clearly, this is something Congress or the HHS Inspector General should investigate.  But this begs the question — do the nationâ€™s media, public health agencies and some politicians have a vested interest in keeping the COVID 19 pandemic going?

I can tell you as someone who covered AIDS and saw how it became a budget dream for FDA, NIH and CDC, all of which faced cuts early in the Reagan administration.  Agencies like this benefited well from AIDS spending, which if you didnâ€™t know was about $34 billion in 2019.

WHAT IS THE COVID EXIT STRATEGY?

The Biden administration and big Blue states like New York, California and Illinois â€“ much of our GDP is in these states â€“ are not going to listen to us or the critics like Makary.

But they will listen to liberals â€“ and CNN, which also questioned CDCâ€™s statistics recently Â Â Â This Johns Hopkins professor states in the liberal Atlantic Feb. 9: End all the restrictions now.Â  So, there could be political movement in this direction.

And, seeing Blue state governors ending school mask mandates, in wake of pressure from teachers unions to keep them and dropping requirements to show â€œvaccine passportsâ€ to be in certain public places,  means we could be turning the corner.  In addition, the hospitals are not being â€œoverloadedâ€ with serious COVID cases that they are denying beds to other patients. And seeing how Canadian truckers have revolted against Canadaâ€™s more-draconian measures, it would seem to me that the public is reaching the end of their rope.

Today, inflation, supply chain shortages, the inability of companies to get employees, are at the forefront of Americansâ€™ concerns â€“ and politicians who have supported lockdowns are feeling the heat. Â The liberal establishment needs to let go â€“ soon. Â  Perhaps Gov. Youngkin can lead the way on this and urge the president to end the national emergency and WHO to downgrade COVID 19 to endemic or epidemic status.

Is it time to â€˜endâ€™ the COVID pandemic? was last modified: February 13th, 2022 by Guest Contributor Ken Reid

What a bunch of malarky. Blaming so much on Biden that it true all over the freaking world. Just plain stupid

Not blaming Biden for anything in this article. But perhaps if you have any influence with the Democrats, please send them my idea that he declare the national emergency over in his State of the Union address.

Move on Ken. Its been over for 2 years. You’ve still got your mind all wrapped up in hype and nonsense. You are vainly trying to show trends (or something) out of fake and corrupted “data” and “reports” that have never been valid or trustworthy. Take a step back and look and see that its all been a gigantic screw job on our minds.

All that’s left to do is hold accountable ALL those who have done this too us. The WuFlu, the lock downs, mark of compliance face diapers, attempts to force a death shot into us, doctors/nurses/hospitals practicing murder for money, and those still wanting to mask and jab our kids.
Never forget.
HONK HONK.

BRINGITON — I had to get my car horn repaired after the RIchmond reopen rally in April 2020. So, I dont necessarily disagree with you. It has been a con job, but unfortunately, all too many decision makers in government and industry need an “off ramp” or “exit strategy” to get out of this without losing fate, and millions of us will do what they say. But what I am saying is that the data — if they would bother to scrutinize it — points to a need to end this thing soon. The WHO, Biden and governors have the power to do that. I think Glenn Youngkin should take the lead and request it.