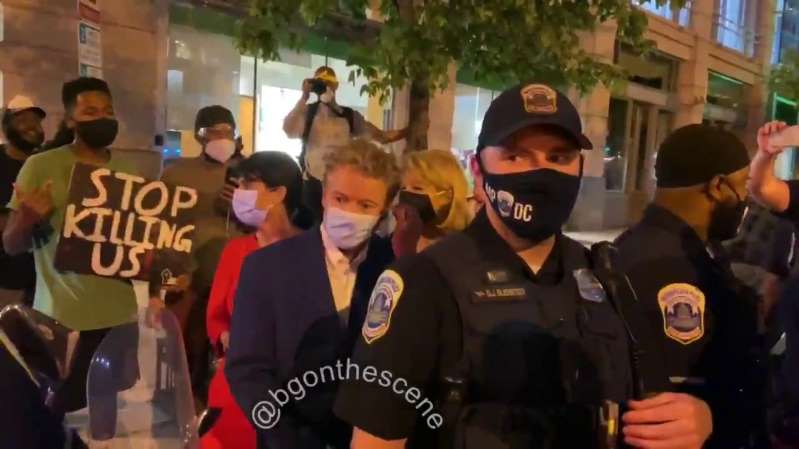 Is It Time to Re-federalize DC?

I could see that my buddy Al (of Alâ€™s Coffee Shop) was feeling pretty low as I dropped by on Friday morning, after the final night of the Republican National Convention. Al wasnâ€™t even rattling the crockery. After ordering my usual Volcanic Mega-caffeine special, I asked Al what was troubling him. Newspapers on the counter were opened to a report on an incident that occurred when an unruly mob surrounded and jostled Senator Rand Paul (R-KY) and his wife as they left the White House after the close of the convention. In a later TV-interview, Senator Paul praised a small squad of DC police who had protected him and his party from serious harm and escorted them to their hotel. â€œWe feared for our lives,â€ he said.

A lifelong resident of the DC area, Al seemed more discouraged than I had ever seen him. â€œâ€What in the world is going on? And how can we put it right? If this keeps up, somebody is going to get hurt, or worse. Why werenâ€™t more cops stationed there as people were leaving the White House? They knew a crowd of protestors had gathered. Just a few bricks or a Molotov cocktail thrown at the senator and his party could have done real damage.â€

I took a sip of my coffee, and I agreed with Al that we seemed to be in a real mess in a number of places, including the nationâ€™s capital. I pointed out that all of the rioting has occurred in cities governed by Democrats who seem to think thereâ€™s political advantage in not restraining the looting, burning and violence that has been going on for months.

Democrats evidently believed, at first, that they could conceal the extent of the rioting by characterizing it as â€œmostly peacefulâ€ protests prompted by George Floydâ€™s killing by Minneapolis police on May 25th. Cooperative liberal media didnâ€™t report the riots, so Democrats depended on the old media maxim: â€œif we donâ€™t report it, it didnâ€™t happen.â€

Gradually though, news of how bad the situation was in Seattle, Portland, Los Angeles, Chicago, New York, and Kenosha, Wisconsin leaked out through conservative media outlets like Fox and One America News. As horrible details of the true situation emerged, Demsâ€™ switched to blaming Mr. Trump for the unrest, and promising that “Good Old Joe” Biden would restore â€œnormalcy.â€ But the public wasnâ€™t buying it. Finally, with the rioting growing worse by the day, even left-leaning reporters began to point out that the rioting was shrinking Joe Bidenâ€™s standing in national polls. Democrat apparatchiks worried out loud that the riots might defeat Mr. Biden if they continued.

Al agreed that a similar attitude-progression has been going on in Washington, DC. Mayor Muriel Bowser has followed the Democratsâ€™ disruption-model by letting the riots continue. This reached a dangerous crescendo on August 27th. But the uncontrolled situation in DC is unique because DC isnâ€™t like other American cities â€“ or isnâ€™t supposed to be.

From its founding in 1800, until the 1970s, Washington was under direct federal control. The Constitution established the city as a federal district, situated on land that was not part of any state.1 This was done so no state governor could interfere with federal officials, including senators, representatives, judges, or even the president. Founders anticipated that the governor of a state in which the capital was located might try to block access to government buildings due to health (or other) concerns to obtain some political advantage. He might keep officials whose policies he disliked from entering the city, or otherwise interfere with the national government. Obviously, such a situation would be intolerable.

Today DC is governed by a mayor and city council who are popularly elected. But DC wasnâ€™t always that way. From 1800 to 1874 Congress experimented with various forms of local governance which proved problematic. Finally, in 1874, Congress abolished local governance and established direct Congressional rule. A three-member Board of Commissioners was set up to govern the city â€“ two members to be appointed by the president (and approved by the Senate), and one selected from the U. S. Army Corps of Engineers. The Board reported directly to Congress. This system governed DC until 1974.

During that century, DC-governance was regarded as a bi-partisan matter, and the city was a reasonably safe, well-run place. A former colleague of mine, whose father served as one of the DC commissioners, said he and his buddies swam, played ball, and rode their bikes all over the city in the 1940s and â€˜50s without any concern for their personal safety. He called DC â€œa wonderful place to grow up in.â€ But the times were a-changing.

As noted, the District of Columbia was intended to be politically non-aligned, to ensure preservation of safety and good order. That intention was honored for a long time, but in 1961 the 23rd Amendment to the Constitution was ratified by the states. It allowed DC citizens to vote in presidential elections and added three DC electors to the Electoral College. That change was pushed by politicians who either didnâ€™t understand why DC should be apolitical, or desired its politicization for their own purposes. Whatever the case, the 23rd ushered in the politicization of Washington, DC. It also presaged the destructive riots which broke out in 1968, following the assassination of Martin Luther King, Jr.

After the riots, Congress passed the DC Home Rule Act of 1973, which authorized a popularly elected mayor and 13-member City Council. While the act allows DC residents to govern their local affairs, the Constitution still gives Congress exclusive jurisdiction over the District â€œin all cases whatsoever,â€ including overturning local laws. DCâ€™s elected government exists at the pleasure of Congress and could theoretically be revoked at any time.

Since establishment of Home Rule, Washington, DC, has had seven mayors â€“ some good and some bad â€“ and city councils of varying quality. Crime has been a continuing problem. The city endured a bad crime spree in the 1990s, with murders spiking at nearly 500 a year. That bad period was overcome, and tranquility was (more or less) restored.

But that tranquil era ended in recent weeks, as a DC mayor strongly aligned with Democratic interests has allowed uncontrolled rioting and weakened police protection for Republican political events. After rioters set a fire in the basement of historic St. Johnâ€™s Church in June, President Trump dispatched hundreds of federal troops to protect statues and federal buildings from vandalism.

Where does all this leave us? Obviously we now have a politicized federal district that canâ€™t be counted on to protect federal property and officials. The loss of direct federal control is clearly at the root of the problem. Letting things go on as they are is like juggling a live grenade. Sooner or later the thing will blow up. When a member of Congress or a cabinet official is finally injured or (God forbid) murdered by a violent mob, all hell is going to break loose. Like most citizens of the Normal Culture, Iâ€™d prefer not to wait until that happens.

What can be done? Itâ€™s hard to say. Home rule was established by an act of Congress, so it could be rescinded in the same way. A Republican congress and president might eventually do it, but we donâ€™t have that political alignment right now.

The 23rd Amendment essentially turned DC into a faux-state, with presidential voting and electors in the Electoral College. Undoing this via another amendment would be a steep climb, as it would require 2/3 approval by both houses of Congress, plus ratification by 38 of the states. There is precedent for this. The 21st Amendment repealed the 18th Amendment â€“ i.e. Prohibition â€“ in 1933, but legal booze was a far more powerful motive than denying the vote to residents of DC would be. Once done, some things canâ€™t be undone.

The politicization of DC is like a small leak in a dike that holds back a great ocean. If allowed to grow, it could eventually cause untold destruction. Iâ€™m not smart enough to see how this situation can be corrected. But corrected it must be â€“ sooner rather than later.

Mr. Trump has some pretty smart lawyers. I hope theyâ€™re working on this as though the nationâ€™s survival depends on it. Because it does. If youâ€™ve got an idea, put it forward.

Is It Time to Re-federalize DC? was last modified: September 1st, 2020 by Woody Zimmerman