Is Medicaid Expansion in Store when the General Assembly Reconvenes Tomorrow?

The General Assembly reconvenes tomorrow September 18, 2014 ostensibly to discuss Medicaid expansion.Â  The most likely result is that dozens of individuals and organizations will be commended, and little else will occur. [read_more]

The General Assembly, when meeting in Special Session, may only address those items agreed to in the rules.Â  We have had rules for this special session but those rules are likely to be changed tomorrow.Â  This week Del. Kirk Cox introduced HJ 5208 which likely sets the scope of topics for the special session as:

Monday of this week Governor McAuliffe along with leaders in the General Assembly held a joint press conference announcing that a deal was reached on cutting the budget.Â  These cuts are mostly done in the form of block deductions (the opposite of block grants) where the entity whose budget is cut gets to be the bad guy and decide which of its own programs and expenses to cut.Â  These bills are highly likely to pass given their precleared nature with both political parties.Â  The text of the bills can be found at: HB5010 and SB5005.

Given their last minute emergency nature, Steve Albertson is right to doubt theÂ purpose of the budget bills.Â  This whole debate sounds a lot like the federal government dealing with raises to the debt ceiling.

Conventional wisdom says that Medicaid expansion is a nonstarter as nothing can pass the House.Â  As conventional wisdom in politics is often wrong, conservatives should be on guard about measures that have been proposed.

As I relayed last week, Del. Tom Rust has offered the primary bill to expand Medicaid. Â Gov. McAuliffe has come out in support of Rustâ€™s bill.Â  Â It is being pushed as if it is a long term solution to assist with the coverage gap and claim federal 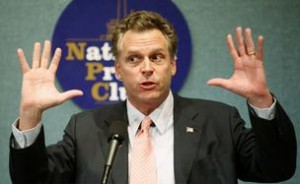 Del. Dave Albo has submitted a bill to bring Virginia law into conformity with a number of other stateâ€™s laws.

Del. James Lemunyon has just offered a bill requiring the Medicaid Innovation and Reform Commission [â€œMIRCâ€] to submit a report with recommendations by the end of the year.Â  Nothing MIRC recommends would be binding.Â  Nonetheless, this looks like a system for the specially selected members of MIRC to keep the issue of Medicaid expansion alive for the 2015 session.

Reassertion of power by the G.A.

As I outlined last week, the General Assembly was set to pass a weaker grant of authority to Speaker Howell to hire counsel to defend the Commonwealth.Â  Del. Mark Cole has now introduced new legislation (HR566) that is specific in the purposes of hiring counsel, namely to defend the Virginia Constitution in the challenge to the marriage amendment, and to challenge any unilateral expansion of Medicaid by Gov. McAuliffe.Â  Arguably, this is germane under the rules as it is a resolution about Medicaid.

Is Medicaid Expansion in Store when the General Assembly Reconvenes Tomorrow? was last modified: September 17th, 2014 by Paul A. Prados

It’s a resolution, not a bill. Governor doesn’t have a veto.

It’s a resolution, not a bill. Governor doesn’t have a veto on it.

LOL! Not quite, but I got a kick out of the Simpson’s reference! 🙂