Have you ever noticed that every time there’s a Republican primary it seems that all the candidates running always claim to be solidly pro-life?  It makes you wonder how we seem to keep electing Republicans that turn around and help block, and even vote against, pro-life legislation.  For those of us that truly care about the pro-life issue it is important we dig past the initial statement of support for our cause and ask for more specifics.  After all, the devil is always in the details, and when red flags pop up about a candidate they must be investigated fully.

There have been many red flags when it comes to Supervisor Ron Meyer’s position on life that makes his commitment to protecting the unborn come into serious question.  The first, and most obvious one, is the lack of any stated position on life on his website.  Candidates who are solidly pro-life have no qualms about stating their position clearly and unequivocally on their website.  As of the writing of this post, Ron not only ignores the life issue, but he has no social issues addressed on his campaign website at all.

The third red flag comes from Ron’s comments on a Facebook posting on Senator Dick Black’s Facebook page.  It started when someone asked Ron Meyer whether he would oppose Kathy Tran’s infanticide bill to which he replied, “absolutely.” 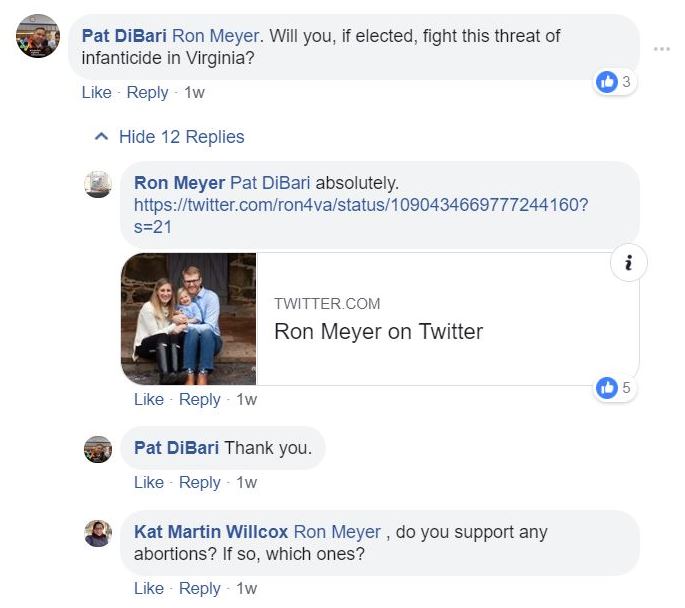 Now saying you oppose Kathy Tran’s horrific bill is like saying you oppose clubbing baby seals.  It’s an absolute no-brainer.  Any Republican who doesn’t oppose that bill should not even bother running.   In this case, Ron is looking to use his opposition to the literal “horrible example” of pro-abortion legislation to signal his pro-life credentials.  But then Ron is asked for more details on his position, and that question goes ignored for days. 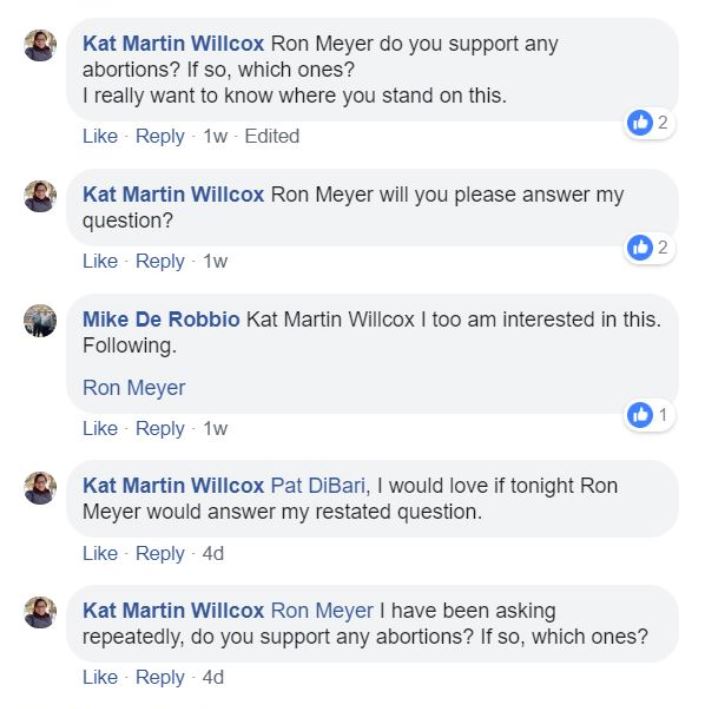 When Ron finally does respond, he provides a statement that seems to create more questions than it answers. 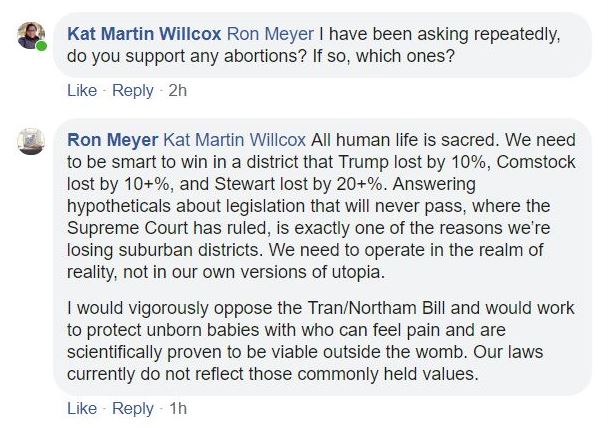 When you parse this response what you get is a man who does not want to provide a straight answer to the question.  By stating how badly other Republicans have lost recently, Ron is trying to make the case that only a more moderate candidate can win this district.  He reinforces this idea by implying that candidates that are 100% pro-life, that believe life begins at conception and want to protect that life, are not living in reality, and are “exactly one of the reasons we’re losing suburban districts.”

Ron also seems to dismiss new pro-life legislation, saying it will never pass, and attempts to use previous Supreme Court decisions as cover for what seems to be a “do nothing” attitude towards pro-life bills.  It is important to note that recent Supreme Court rulings such as the Heller decision, recognizing an individuals right to keep and bear arms, has not deterred Democrats in the slightest from pushing more and more onerous gun control regulations.

Ron ends with a referral back to opposing the “horrible example” of the Tran bill, and then states he would “work to protect unborn babies who can feel pain and are scientifically proven to be viable outside the womb.”  This is an important point to clarify.  Scientific studies typically place viability somewhere between 24 and 28 weeks.  While a baby may feel pain somewhere around 8 weeks, adding the qualifier that the baby must be viable outside the womb means that a baby has to survive into the third trimester before Ron will work to protect it.

This led to more questions from other people, including this exchange: 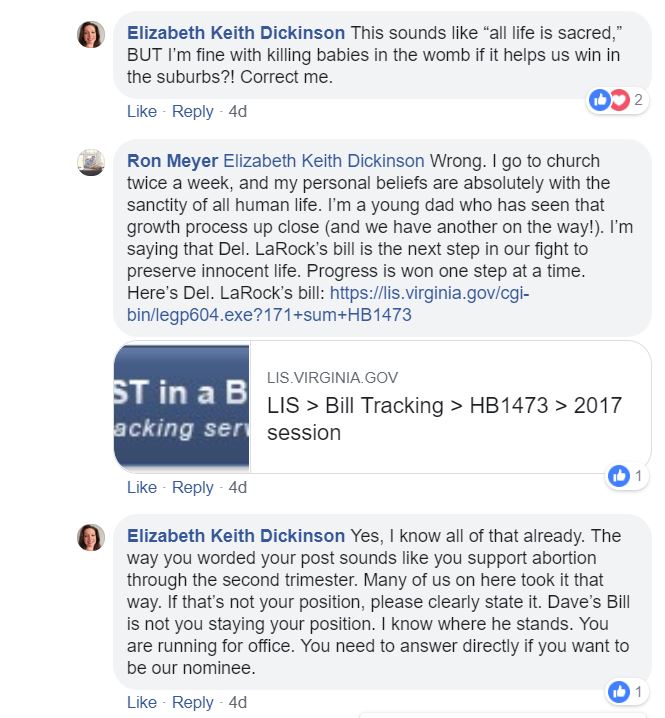 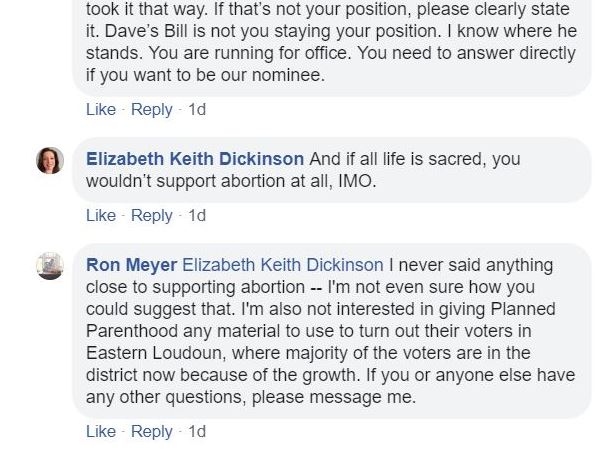 Take note of the first response where Ron mentions his “personal beliefs” are pro-life.  This is a common statement from people who say they are pro-life, but won’t actually do anything to try and end abortion.  Tim Kaine is famous for saying he is “personally pro-life” yet consistently supports abortion.  The second part of that “personally pro-life” statement usually goes, “I am personally pro-life, but I don’t want to force my values on others.”  Yet that is exactly what people elected to office are doing every day.  Every law that gets passed is a way to force the values of the majority onto society.  If you say you value life, but won’t work to protect it, then how much do you really value it?

Another interesting comment is where Ron says he is “not interested in giving Planned Parenthood any material to use to turn out their voters in Eastern Loudoun.” One of the mistaken beliefs among moderate Republicans is that if they just don’t talk about social issues, then Democrats won’t attack them on social issues.  It never works out that way.  If Ron were to win the nomination, he would be in a lose/lose situation where pro-life voters are uninspired to go out and vote for him, and Planned Parenthood would still run ads against him claiming he wants to ban all abortions.

Most moderate Republicans defend their “no talking about social issues” stance by trying to point to tactics and strategy, and Ron is no exception here.  We are told the district is “trending blue,” and that in order to win we need a candidate who can “appeal to those blue leaning parts of the district.”  In Republican primaries this usually means the moderate candidate tries to tell Republican voters very quietly that he really is pro-life, but that he doesn’t want to talk about it.  They ask pro-life voters to trust him as he runs his “stealth campaign” to lull left leaning voters to sleep and win their votes.

But ask yourself this question.  If a politician is too afraid to say they are solidly pro-life out of fear of losing votes during the campaign, how can you possibly expect them to have the courage to vote for pro-life legislation once they are elected and risk angering the very same voters they were afraid of before?  I have seen plenty of politicians lose their spine once they get elected, but I have yet to meet one that actually grows one in office.

With so many red flags coming from Ron on this issue, it seems pretty clear that he cannot be counted on to stand strong for life when it counts.  We have a new Supreme Court now, and the only way to challenge the precedents set by disastrous old rulings like Roe v. Wade is to have new laws enacted that directly challenge those rulings.  To do that we need men and women in office that will have the courage to take those tough votes.

From what I have seen, Ron is not one of those men.

[…] Meyer, who has run from social conservative issues and had to be shamed into adding position statements on abortion and the 2nd Amendment on his website, is now trying to claim the mantle of fiscal conservative. As […]