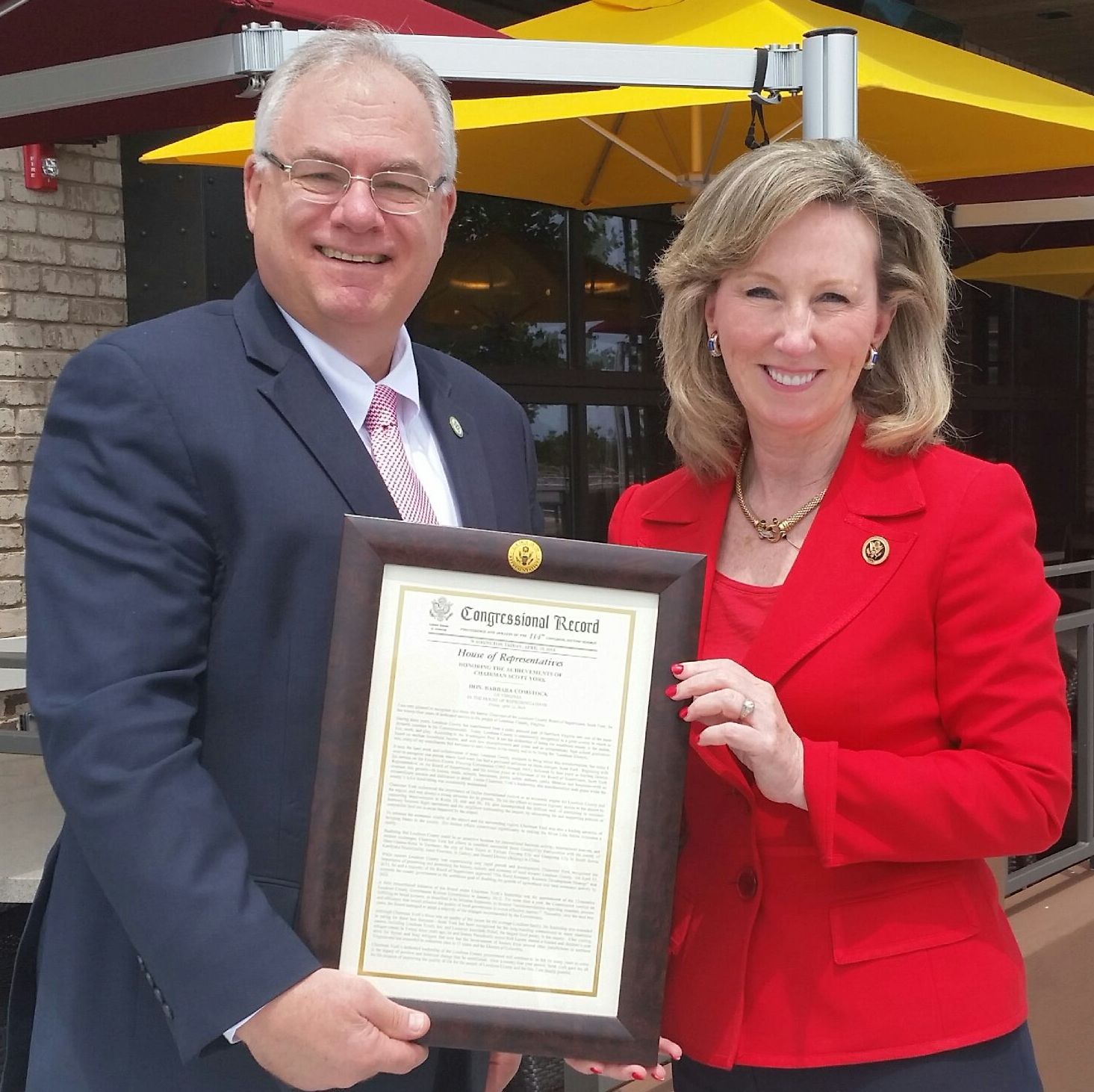 Is Scott York Running for Congress?

On Friday, July 22, 2016, defeated Loudoun Board Chairman Scott York posted on Facebook about lunching with Congresswoman Barbara Comstock and her getting remarks placed in the Congressional Record praising his time in office.

York joined, left, re-joined and then again left the Republican Party four times since 2003.  After “retiring” early last year, York changed his mind and ran as an independent.   Despite twenty years in office and arguing only he was competent, seventy percent of Loudouners voted for somebody else.

So, in the midst of a fierce re-election battle, why would our uber-savvy Congresswoman glorify a man many Loudoun Republicans deem the party’s modern Benedict Arnold?  Is Shawn Williams next?

Rumors of Senator Kaine joining the Democratic ticket circulated months before he was chosen.  The Washington Post reported a consultant for Congresswoman Comstock bought domain names for a possible Senate campaign in 2018.  The election is less than one-hundred days away.  With a thin Republican Senate majority, politicos in both parties are quietly discussing the possibility of a vacant Senate seat.

Her Northern Virginia base, moderate voting record and unmatched fundraising rolodex will make Barbara Comstock a formidable Senate candidate in 2017.  Unlike Frank Wolf, she endorses candidates during the nomination process.   If Barbara Comstock is elected to the Senate, a special election for her 10th District seat will be held in early 2018.   Senator Comstock will take a keen interest in who succeeds her!

Does Congresswoman Comstock view Scott York as the ideal candidate?

He knows the issues, has name recognition and, despite an embarrassing loss, could raise money.  These attributes would be invaluable in a special election.

Were her remarks in the Congressional Record intended to subtlety reveal the start of an organized effort by York to make a third return to the party and run for Congress?   Using a phrase from the Byrd Machine, did Barbara Comstock tentatively give Scott York “the nod” for 2018 during their lunch together?

What other explanation is there for Congresswoman Comstock flattering a man who campaigned as an independent against Republicans three times since 2003?

Besides Barbara Comstock, others would support York. Immediate full throated endorsements would come from Vice-Chair Ralph Buona, Supervisor “Metro Matt” Letourneau and Sheriff Mike Chapman.  If the Loudoun Tribune implodes, York strategist Tom Julia and campaign manager Brian Reynolds will be available.  Should the Tribune wobble through 2017, Reynolds and Julia will use the Tribune as a counterweight to the Loudoun Times Mirror whose publisher is still mad York lied to him about retiring before accepting the “Citizen of the Year Award.”

York doesn’t need to re-join the LCRC to file as a Republican candidate.  He didn’t attend the 2015 convention and didn’t sign a statement of intent so he is not an Article I violator (in Republican Party lingo) which would excommunicate him for four years. When he announced as an independent, he was removed from the LCRC as an “ex-officio” member.

York acts like a candidate.  He attends ribbon cuttings, public events, including the recent opening of Congresswoman Comstock’s Loudoun office, posts on social media, and has not yet signed on with a firm.  By staying unemployed, York keeps his options open and can plan his campaign.

His problem is the party, not the public.  York will have an easier time in a general election than getting through the party gauntlet for the nomination.  If he is the Republican candidate, he is almost home free.

York can handle his popularity problem by focusing on units other than Loudoun.  In Fairfax, his party transgressions against grass-roots party conservatives will be brushed aside in the salons of McLean and the drawing rooms of Great Falls.  His lack of name recognition will mask his political sins in the western parts of the district where ghillie suits, not mink coats, are the fashion rage.   If he wins Fairfax and the district’s smaller units, all he has to do is not lose Loudoun by much in a small turnout party nominating process.

Why would York run?  Ego! Until last November, he looked invincible. After being reamed, he wants back in the game.   Did “Coach” Comstock tell him at lunch to lace up his Florsheims and get ready for overtime?

Not possible you say?  If I told you this time last year Donald Trump would be the Republican nominee, most of you would have said that was impossible!

This a joke right, really Comstock for Senate.
Funny

Thank you Charlie King. I was just discussing with another Republican activist how I spent 50 years and she said it should be in the congressional record or something. I am writing it up for submission and “youngster” Ken Reid actually has been at this political acitivities for 40 years, so he’s got some explaining to do to– for the CR! Great “idea” there.

It is become political superstition to beware the kind words and ringing endorsement of Representative Comstock, many recipients nearly escaped or now line the path to the political graveyard.

Stop, I’m crying, you’re killing me! Barbara for Senate? York for Congress? Tears are streaming out of my eyes!

Who’s going to pull this off? RPV Chairman Shak????

You really don’t think Barbara will run for Senate? Of course she will. If not in 2017, then 2018. York will be her obvious choice to fill her seat.

Barbara could run for Senate, Shak did. She wouldn’t get the nomination…. Unless her opponent was Ken Cuccinelli, then she would win the nomination, but not the general.

If she can hold on to her seat, she’s got a sweet gig now.

Scott York could have ran away with State Senate, but he didn’t. I think he’s retired.

If Barbara endorses you for anything, you should run to the nearest exit.

Besides, the GOPeRINO’s think that it is Cantor’s turn for Senate.

And Shak has always had his eye on Congress…

Cantor for senate? Or anything other than dog catcher?

It is my goal to hover about the fringe and on the bleeding edge of The Bull Elephant.

But I do agree that we will see Eric Cantor in the Senate at the same time we see Shak in the House.

York will either run for Congress or run again for Chairman of the Board. Since Republicans will not endorse him, he will have to run as an independent. That’s worked for him in the past.

Promote your mistakes. Comstock would no different than what we now have representing us in the senate. York would be a step up from Comstock as a congressman.

I won’t vote for either one of these clowns.

I can’t stand York and Comstock has one of the worst voting records of any Republican congressman. She might as well be a Democrat.