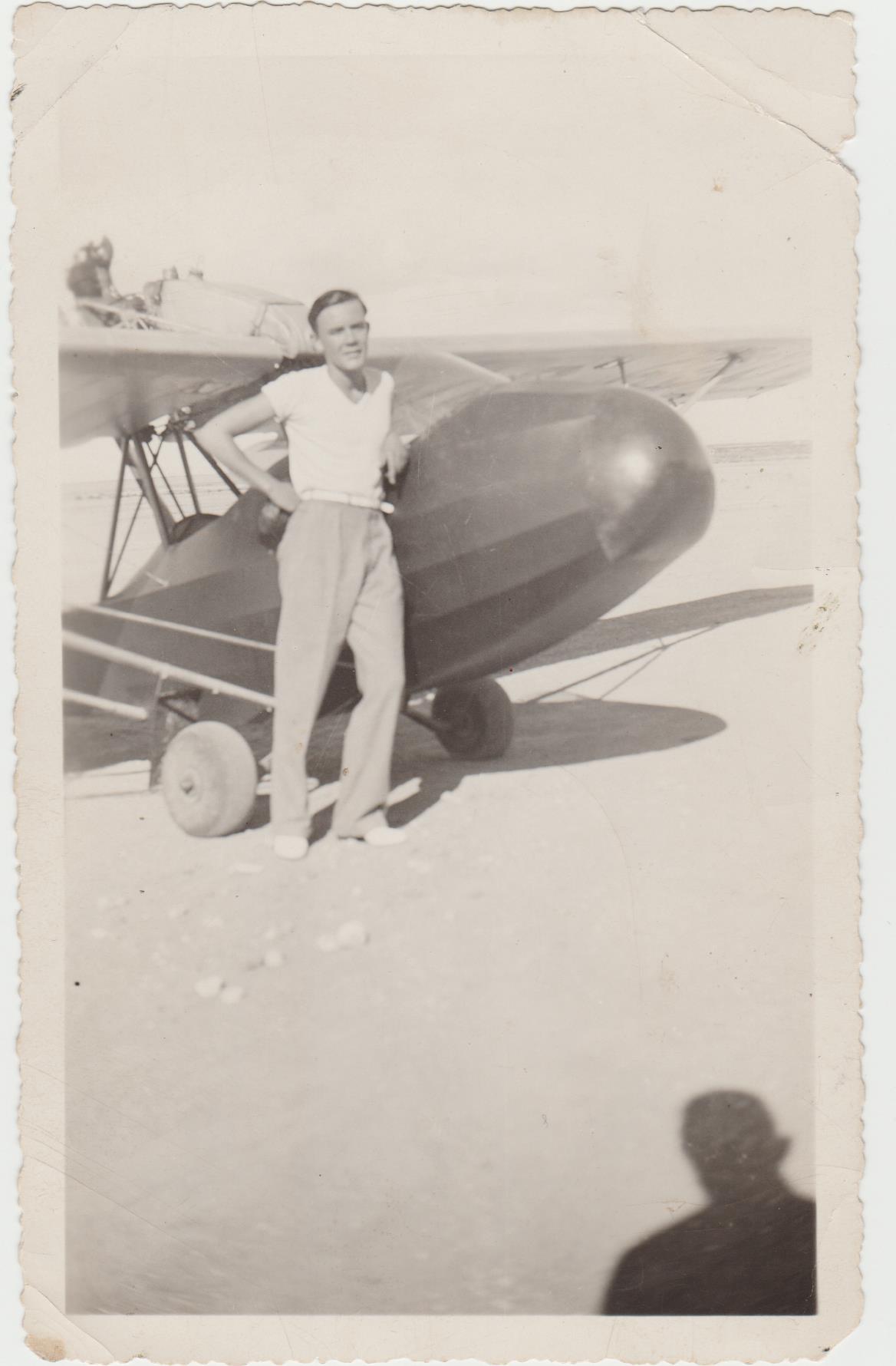 My father standing in front of a canvas Curtiss-Wright Jr, 45hp monoplane in 1936.

Is the End of Time Near?

A Short Essay on the End

Hang around long enough, and you’ll soon recognize that in every generation there is no shortage of folks who think that their generation is the worst, and will probably be the last.

The end of time is near.

This is why there is an insatiable market for doomsday books and movies about the end of days, or post-apocalyptic survival dramas.

Every generation looks at the chaos of the world around them, and the unrelenting inhumanity and evil of some men towards other men, and become convinced the world can’t continue, or at least it can’t continue as it is currently arranged.

This has been going on for thousands of years. Even Martin Luther, the great theologian who kick-started the Reformation, was convinced he lived in the darkest days and mused about the world’s end often.

In 1528 he wrote darkly that; “Things were going toward their end.”

Perhaps there is some ancient incantation in our DNA that calls up in us the rawest instinct for survival, so that we are prepared for whatever may come.

When I was a young boy, my family lived next door to a very old couple, the Yeager’s. When the heat of the Texas day broke in the summer evening, I’d sit on the porch with Mr. Yeager frequently and he would enchant my young adventuresome mind with his stories.

He and Mrs. Yeager had married in the Oklahoma territory before it was even a state. (Yes, you read that correctly.) They came to the high mountain desert of West Texas for a new start in life – in a covered wagon, on dirt trails and roads that connected other dirt trails and roads.

But, in spite of that, Mr. Yeager assured me that the end of the world was close. It was all “moving too fast,” he allowed. Somehow, we humans would lose control of it, “and that would be that.”

Unsettled by that gloomy prediction, I asked my father what he thought. He agreed with Mr. Yeager.

My father was a child of the Great Depression. He lived a difficult adolescence, but managed to learn to fly in an all-canvas open cockpit Curtiss-Wright monoplane (photo above), which prepared him for WWII where he became a decorated B-24 pilot in the Pacific flying 58 combat missions. Later he would be a senior officer controlling nuclear weapons being flown from bases in the U.K. for the newly formed Strategic Air Command. Although he died way too young flying into Vietnam, he perhaps had just seen too much. Regardless, he always surmised that keeping it all together would prove too daunting for mankind. The end would come soon.

About the only thing we know for sure is that there is nothing illogical about believing that there will be an end of times. There will be, of course.

The world will die in an instant as the sun around which it orbits goes dark or cools too much, or the earth will be struck by some great natural calamity hurtling towards it from outer space, or invading it from microscopic inner space. Perhaps man himself will finally destroy the world as he figuratively climbs towards the sun, a modern Icarus.

What brings all of this to my mind is the incessant hype and promotion of the AI (artificial intelligence) revolution with robotics, and the attendant promise of cross-fitting human beings with various computer interactions and access to unlimited knowledge, memory, and utility overcoming our inherent biological limitations – making us literally part human, part machine.

The AI revolution and its associated advances has spawned a cottage industry of new doomsday prognosticators, including a surprising number of famous scientists and thinkers who are suggesting – you guessed it – the end may be near. The thinking generally is that at some tipping point AI will become a self-proliferating intelligence in and of itself, superseding any need for human input and thus determining for itself that humans are an unnecessary host.

In this future some claim the robotic Rubicon will be crossed and human life as we understand it will be dispensable. Think Arnold Schwarzenegger here.

In a complementary theory, there will be the rise of the cyborg. Humans will be compelled, to save our own utility, to integrate, to breed if you will, with machines. A USB port in your skull, to interface the brain and web, to calculate some specific mathematical problem, or perform some medical procedure in the field? Special eye-wear to allow an automatic screen shot piped into your head with useful information, data and such. The ideas are endless, no?

Of course, in some limited degree this is already happening in the medical field where there are some startling new advances for recovering sight, sound, and the loss of various motor skills with the aid of computer processors telling nerve endings what to do and when. Also, there are dramatic advances in mapping, identifying and manipulating DNA that promise to alter specific DNA sequences to correct or enhance physical and mental attributes.

You can’t pick up a copy of any of the top science magazines without seeing at least one major article on AI or some variation of the new era of intelligent machines, and the men and women who will become reliant on the cross-interaction of computerized information. And the tech blogs are buzzing 24/7.

I’ve been following this science with great interest, as best a layman can, for some time, and there in no doubt whatsoever in my mind that this is the “brave new world” and it’s not only at our doorstep, it’s already in the foyer, headed for the living room.

Left to its own devices, this is where the world is headed.

The question now, it seems to me, is only the degree to which we will be changed by this revolution – not if we’ll be changed. How will it look? What of our humanity, and our conscience, and our passions? Will they be silenced, or emboldened? Will we be more good than evil? Will we still be free, or will that word no longer have a distinct meaning?

Or will we simply conform to the state of the passionless binary code that drives the machines we build?

Except…except…no sooner are these question asked, I’m dragged back to Reality.

As a practicing (and very flawed) Christian, I don’t believe anything is ever left to its own devices. Not really. The more I ponder and think about all of this and its impending impact on mankind, the more convinced I am of the existence of God, and more specifically the atoning sacrifice, the salvation of the human race, by Jesus Christ.

I find myself quite by accident in the very good company of many men and women who only later in their lives came to this conclusion that God is not only real, but specifically known to us by His son, and in sovereign control of His creation. And He will not lose control. It’s based on evidence, not wishful thinking, after decades of arm-wrestling the subject to a nub.

In the last century, one of its intellectual giants, C.S. Lewis, like many of his contemporary’s, started out as an atheist, perhaps hardened by his combat experiences in the First World War followed by yet another World War. In the middle of his years after an intensive investigation of the claims of Christianity, pressed on him by his friends J.R.R. Tolkien and C.K. Chesterton, he writes of simply coming to the conclusion, that “of course it’s all true.” In his own words, he became the most “dejected and reluctant convert” in all of England.

Many of us know exactly what he meant.

The fingerprints of God are evident all over his creation and dress His greatest creation – us. I see over and over again His blueprint and His truth and it becomes a bolder pattern the more it is looked at. It is revealed and explained in great detail, with excruciating honesty in His word. And while its human converts are flawed, failed and often irritating; it doesn’t alter the truth of Him and His creation one molecule’s worth.

I gave up long ago trying to “convince” people about God, or trying to debate or argue about the truth, as I found He doesn’t need any help. I find his followers among the great and the average, the brilliant and the simple, the rich and the poor, and the warrior and the peacemaker.

I find that there are very few who can withstand the introspection of heart that He performs when allowed. An honestly examined life leads to no other conclusion in my experience.

In 1707 the great English writer, theologian, minister and logician, Isaac Watts wrote what many consider the finest Christian hymn, When I survey the Wondrous Cross, (listen here, sung by Katheryn Scott). In these simple lyrics, sits the truth of the centrality of God in human affairs, not outside those affairs.

That doesn’t mean any of us understand how all of this works out in the end. It only means that we can rest assured that the God of the Universe will not be side-tracked. Every knee will bow to Him; even AI will bow to Him, as will cyborgs. So shall we all.

I don’t know about the end of time, but I think a valid case can be made for the end of western civilization by suicide. The totalitarians of Islam and international socialism are already stabbing at the hearts of major European cities and states, and are increasing their oppression of dissent.