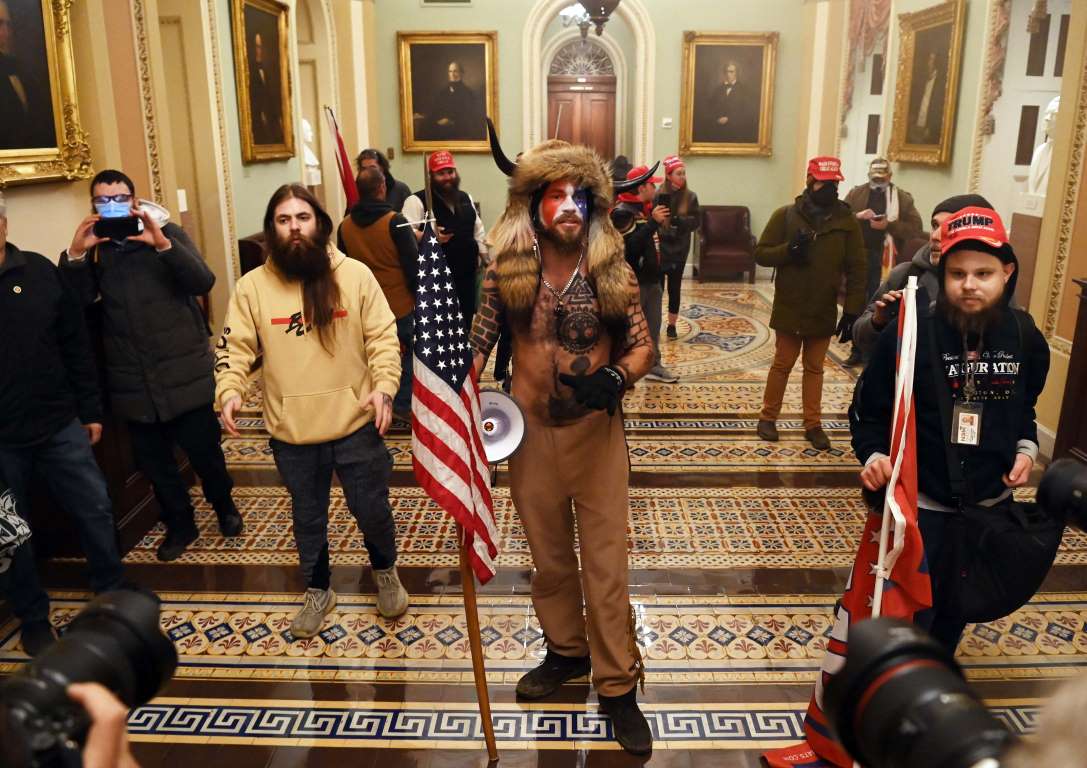 Is Zealotry in America here to stay?

The term â€œzealotâ€ was used to describe a splinter group of Jews in Roman Judea called the â€œSicarrii,â€ who stood up to their conquerors at Masada in 74 CE, choosing to die by suicide than surrender following a year long siege by Roman legions.

For Jews and succeeding peoples battling for their freedom, the zealots were freedom fighters whoâ€™d rather die at their own hands than be slaves to Rome.Â  Each year, the Israeli Defense Forces hold induction ceremonies at Masada and as a Jew, who visited there in 2014, I swelled with pride.

Zealotry and fanaticism may have a role when a religious or political minority is facing destruction by an oppressive power.Â  As conservative champion Barry Goldwater said in 1964:Â  â€œExtremism in the defense of liberty is no vice.â€

But in a strong representative democracy such as the U.S., where we have a process for grievance and freedom to protest, zealotry should not be the norm.

However, in todayâ€™s Divided States of America, where politics defines many Americans who reside in Red and Blue â€œecho chamberâ€ tribal camps, where  the politics of winning at all costs based on â€œalternative facts,â€ rules, and â€œcompromise â€œ is a dirty word, zealotry is here with a vengeance.  In addition, vigilantism seems to be fomenting as it appears our national and local political leaders seem powerless to tackle hard issues.

It is happening on BOTH sides.  Letâ€™s be real â€“ there was more destruction and lives lost by all those Leftist riots over George Floyd, met with tacit approval of Democrat governors and mayors, than there was Jan. 6 at the Capitol.

But the optics of the Capitol being breached has led to a chorus of denunciations by both Republicans and Democrats and urges for reconciliation and healing.

No doubt, Trumpâ€™s zealotry in pushing his â€œStop the Stealâ€ campaign spurred this mob that tried to take things into their own hands to stop Congress from certifying the electoral vote for Joe Biden.  What was supposed to be a formality turned into a futile overzealous effort by some Republicans to go to the mat for Trump and get more airtime for themselves on TV.

Now, with the world seeing the Capitol breached by a mob, something that happens rarely (if at all) in the U.S., and the dominant liberal media calling it an â€œinsurrectionâ€ and â€œcoup attempt,â€ we are seeing the consequences of win-at-all cost zealotry.

While Trumpâ€™s words at the Stop the Steal rally in DC may have coaxed the peaceful demonstrators to march to the Capitol, leading some to break in, the reality is the anger and resentment toward the media, the Democrats and liberal establishment by Trump supporters has been boiling for some time.  Conservative media have spent years airing examples â€“ impeachment, the Floyd riots, the COVID lockdowns, and changing the rules on elections ostensibly due to COVID, but which millions of conservatives believe led to a stolen election.  All of this spread over social media, leading to conspiracy theories and thus, anger.

While zealotry on the Left was seen with riots this summer and fall, where there was more destruction and more death and injury, the optics of seeing the U.S. Capitol, our temple of Democracy , breached in such a manner may live with us for a long time.  At least 1 person was shot dead, three died of medical issues and 68 have been arrested.

The liberal media are calling this a â€œriotâ€ a â€œcoup attemptâ€ and insurrection, while conservative media is pointing fingers at liberal media which failed to called the same for the George Floyd conflagrations over the summer;.   A number of liberals tried to convince themselves those riots were instigated by white supremacists and were â€œmostly peaceful protests.â€ And now, Trumpsters at the rally or who watched on TV are deluding themselves, too, by blaming the riots on ANTIFA.

It seems neither tribe can accept responsibility for oneâ€™s actions.

Itâ€™s nice that politicians of both parties, notably Republicans fearful of the fallout of this ordeal, are preaching  calm and â€œcoming together,â€ and unity.  Well, the same happened after the Bernie Sanders zealot  tried to shoot and kill GOP members of Congress practicing ball on a field in Alexandria in June 2017.

Prior to that shooting, there was video of Democrat leaders and other anti-Trump zealots   urging their followers to confront Trump officials in gas stations, stores or restaurants.  Anger and fear pervaded the Left.

After that shooting, members of Congress, Democrat and Republican, joined hands on the field and played ball.  President Trump, accused of being a Divider in Chief, urged healing too.

But not long after the unity fest, the Liberal resistance born from Hillary Clintonâ€™s sour grapes over losing the election to Trump, and blaming it on Russia collusion with Trump, revived with a vengeance.  It led Democrats to impeach the president and side with savage attacks on judicial nominees Brett Kavanaugh and Amy Coney Barrett.   More officials of the administration were confronted in restaurants.  A GOP congressman in Kentucky was run off the road by a Sanders supporter after a town hall.

The balkanized partisan media notably the 24-hour networks would generally play up attacks of the other side, not their own viewers.Â  But they profit handsomely from this, along with negative campaign ads.Â  Zealotry and extremism â€œsells,â€ gets you on TV and in social media and yields a â€œfollowingâ€ so you can be a talking head and get speaking fees.Â  It creates more clicks and thus more page views for the print media, too.Â  Zealotry helps hire public relations and grassroots specialists and fundraisers.Â

â€œBuffalo manâ€ whom you see in the picture is now an icon.

Facebook, Twitter and talk radio benefit from all of this division, too.  Politics has become the new â€œnational pastime.â€ And an unhealthy one.

Americans debate each other back and forth on Facebook, throwing angry invective at the lone wolf â€œtrollerâ€ who dares to comment against the narrative of the person posting some meme or biased stories.  In my  case, my posts Dec. 18 calling on Trump to concede and questioning the rally garnered resentment from conservative friends.  Hans Bader, who writes for this blog, was met with scorn for stating the truth after the election â€“ Trump lost.

Like the unity that evaporated after the Alexandria shootings, it will evaporate here, too. Joe Biden, a consensus politician from yesteryear, will soon learn that he will not be able to get much consensus or compromise with Republicans, who still form a significant minority in Congress despite losing both houses after the Georgia runoff. They will be tagged as â€œobstructionistsâ€ by the liberal media, which will forget the obstruction the Democrats engaged in with Trump.

So, Biden, like Presidents Obama and Bush before him, may find the politics of division helpful to stay in power. And thatâ€™s what this is about â€“ staying in power, not results.  Both sides want to win at all costs â€“ even if it means destroying peopleâ€™s lives in the process.

The cost of running for office and the micromanaging of how members of Congress vote to thwart opponents in future elections dictate this environment.

Members of Congress and the administration seem to spend more time on TV debating than talking to each other to solve problems.  They only act when their backs are to the wall, as with the recent COVID rescue plan â€“ which should have passed in the summer but was delayed due to politics.

The viewing public doesnâ€™t realize itâ€™s being played â€“ by the national media, the blogs and partisan web sites like the Huffington Post and Breitbart; by all sorts of biased â€œnewsâ€ sites, and the political consultants and fundraisers, who are making a lot of money off division.  Letâ€™s not forget, Trumpâ€™s â€œStop the Stealâ€ campaign led him to raise nearly $200 million for his campaign or future use.

I wish zealotry would subside, but itâ€™s just TOO profitable for these groups and individuals and the activists goaded on by the tweets, memes and biased news they read only galvanizes more of it to come.

In a future column, I will attempt to offer some solutions.  For now, I will go back to praying.

Will Democrats use mob assault of Capitol as a â€˜Reichstag Fireâ€™ to seize more power, crimp conservative views? – The Bull Elephant January 12, 2021 at 4:13 pm

[…] mentioned in my column about zealotry that I would propose some solutions.   I am still working on those.  But unfortunately, our party is out of power in […]