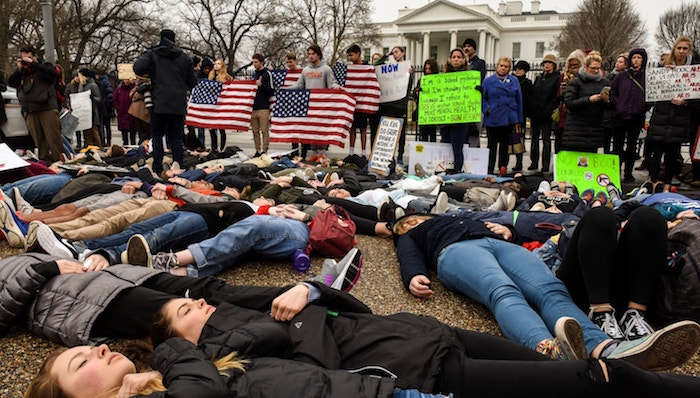 It is all about votes, not saving lives

At CNNs anti-gun ownership “town hall” circus in Florida Feb. 21, where Dana Loesch was threatened and Sen. Marco Rubio (R-FL) turned into a punching bag, CNN’s Jake Tapper actually asked a question few are asking – why didn’t the Democrats renew the assault weapons ban or any serious gun legislation during the key two-year period – 2009-2011 – -when they controlled the White House and had a filibuster-proof majority in the Senate and huge majority in the House?

In response, Sen. Bill Nelson (D-FL), who was in the Senate at the time, said: “Our priority was getting the Affordable Care Act (Obamacare) passed, and no, it [gun legislation] was not a priority.

“When the Senate had 60 votes until Ted Kennedy died , that’ s how we got the affordable health care passed and yes, gun legislation under those circumstances should have been considered because there were a lot of massacres up to that point.”

Lots of massacres, indeed, and nobody in the media or even Republican circles is holding  Democrats responsible (as always).  Only Wayne LaPierre, CEO of the National Rifle Assn., held Senate Minority Leader Charles Schumer (D-NY) accountable for failing to fulfil a promise he made – in 1993, when Democrats also controlled both Houses and the White House – to insert mental health records into the background check system.

But John Massoud, in his excellent piece on these pages last week, noted the failure of Democrats to do anything during this period:

Republican Senators Chuck Grassley and Ted Cruz introduced a bill which would have required federal agencies to report crimes to the NICS (National Instant Criminal Background Check System) and Harry Reid had this bill filibustered.  In 2010, 48000 felons and fugitives lied and illegally tried to purchase guns, and the Obama DOJ only prosecuted 44 of them.   Cruz, in fact, was on Joe Pags’ radio show Sunday, listing a series of mass shooters who never would have gotten guns for their sprees had his legislation passed.

I have been circulating the Massoud piece to a number of media people because it basically shows that Democrats and gun-control advocates have no credibility on this issue.  They choose only to demonize the NRA and gun owners, and Republican elected who support them.  Their efforts in Congress and the state legislatures are reactive AFTER mass shootings and ONLY when Republicans control Congress and or the White House.  It’s all about getting votes, not saving lives.

The table below, taken from Wikipedia, shows that while the Democrats controlled both houses – 2007 to 2011 – and the 2009-2011 period when Obama was president, some 97 people were killed in mass shootings –31 being killed during the time the Democrats were in complete control of Congress and the White House.

But during the two years of full Democrat control, in reality, some 17 pieces of legislation  were introduced by members of Congress to address gun issues and none advanced beyond the committee stage.  The renewal of the assault weapons ban was not among them, according to my research on Congress.gov.

Politifact says Obama, himself, did not call for reinstating the 1994-2004 assault weapons ban that was passed by a Democrat Congress and signed into law by Democrat president Bill Clinton, until his SECOND administration, specifically after AFTER the Newtown, CT, massacre of 27 children and adults.  And then, the legislation was killed by Democrat Senators siding with 2nd amendment advocates.

Tapper’s question was re-stated during daytime commentary on CNN and a Democrat spinmeister was quick to defend the Dems by saying “the gun lobby probably killed those bills.”

However, online searches show no massive effort by 2nd amendment advocacy groups to kill legislation in committees.   The only legislation related to firearms that was enacted during 2009-11 concerned the excise tax.

So, this renewed interest in legislation in the aftermath of the Parkland, FL, killings is about politics.  Gun control and liberal groups, aligned with Democrats, smell political blood for the 2018 elections and are flocking to this liberal Florida community to use teachers, students and parents as “poster children” for their cause to elect more Democrats in the fall.

I really do not foresee any significant action on guns and again, any new rules are laws are not going to solve “the problem” unless it stiffens NCIS.

Democrats are not going to support Trump legislation unless “it goes further” and Republicans are not going to rankle gun owners in their districts, who can document their need for guns like the AR-15, as this fellow did on the liberal Vox blog   The combined membership (and there could be overlap) of the NRA and Gun Owners of America, is about 6.5 million.

Finally, any gun restrictions will be PROSPECTIVE and will not cover the estimated 350 million firearms in circulation, of which 15 million are AR-15-style guns, nor all the extended magazines and “bump stocks” in circulation.

I think it would be wiser over the next few weeks for Congress and Trump to focus on passing a real federal budget, trade reform, infrastructure, immigration and of course, MAGA.

It is all about votes, not saving lives was last modified: March 1st, 2018 by Guest Contributor Ken Reid

Interesting input from the Gateway Pundit. Looks like the root of the problem was an Obama program to stop arresting thugs and making the arrest numbers look better so that federal money would flow into Broward. Essentially, if the Sheriff, the Board of Supervisor, and School Board could reduce the crime numbers, Obama’s Promise program would reward the decline in crime with money. Below is a summary of how this works and an interview of the Sheriff Israel.

While students and the liberal media rush to blame the National Rifle Association for the tragic school shooting in Parkland, President Barack Obama’s PROMISE program may have actually helped to keep Nikolas Cruz from failing a background check that would have stopped him from purchasing guns.

In an effort to close the racial achievement gap in Florida’s Broward County Public Schools, Robert Runcie was brought in to serve as superintendent in 2013. While attempting to figure out why black students had a graduation rate of only 61 percent compared to 81 percent for white students, Runcie determined that it was largely because of their arrest rates.

“One of the first things I saw was a huge differential in minority students, black male students in particular, in terms of suspensions and arrests,” Runcie told American Prospect magazine in 2013. The magazine noted that “black students made up two-thirds of all suspensions during the 2011-2012 school year despite comprising only 40 percent of the student body.” Instead of concluding that perhaps there is more crime within certain groups, Runcie deduced that it must be racial bias leading to the arrests.

To combat this perceived injustice, Broward announced broad changes designed to mitigate the use of harsh punishments for minor misbehavior. The county, working with a member of the local NAACP, amended discipline codes, prohibited arrests in many circumstances and developed alternatives to suspension. Soon, arrests of students dropped 66%. The payoff was big, as President Obama’s program rewarded local governments with grants if they kept school arrests down.

Here’s the problem, without the arrests — there is no record that will show up in a background check to keep violent young adults from purchasing firearms. Limbaugh Comment

During a recent interview with Jake Tapper, Broward County Sheriff Scott Israel was asked about the Obama-era program.

“A lot of people in the community have noted that the Broward County School Board entered into an agreement when you were sheriff in 2013, to pursue the least punitive means of discipline against students,” Tapper began. “And this new policy encouraged warnings, consultations with parents, programs on conflict resolution instead of arresting students for crimes. Weren’t there incidents committed by the shooter as a student that if this new policy hadn’t been in place, he would have been arrested for and then not able to legally the buy a gun?”

“What you’re referring to is the PROMISE Program, and it’s giving the school… The school has the ability under certain circumstances not to call the police, not to get the police involved on misdemeanor offenses and take care of it within the school. It’s an excellent program. It’s helping many, many people. What this program does is not put a person at 14, 15, 16 years old into the criminal justice system, so they can —” Israel ranted.

“What if he should be in the criminal justice system?” Tapper interjected. “What if he does something violent to a student? What if he takes bullets to school?”

“That… Then…” Israel muttered.

“What if he takes knives to school? What if he threatens the lives of fellow students?” Tapper persisted.

“Then he… Then he goes to jail.” Israel responded.

“That’s not what happened!” Tapper asserted.

Finally, Israel responded, “that’s not possible in the PROMISE Program.”
———————————————————————-
This is the heart of the massacre. A stupid and destructive federal program with no accountability at the local level. Under any reasonable circumstances, Cruz should have been arrested and jailed, but to get some federal money, the Broward authorities decided to play games with the crime statistics and with the lives of the school kids. A perfect leftist debacle, and one that was easily predicted.

Here’s the problem, without the arrests — there is no record that will
show up in a background check to keep violent young adults from
purchasing firearms. Limbaugh Comment

That is A problem but is not they problem. THE problem liberals assuming racial animus where none has been proven and none exists.

I don’t think it is about votes as Democrats KNOW this issue is toxic for them. It is about control. You cannot control an armed populace. You cannot repress them and force your will on them freely. Which is why Nazi Germany disarmed the Jews and Leninist and Stalinist Russia did the same to the Kulaks (as a precursor to mass murder).

I do agree that the last thing pro-abortion Democrats care about is child murder.