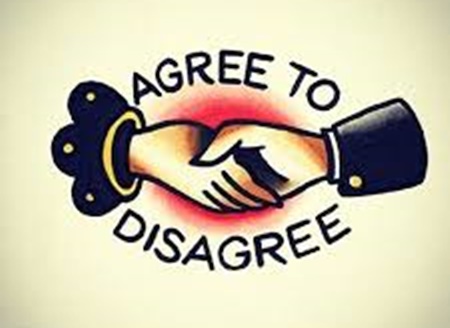 It is O.K. to Agree to Disagree

As a career naval officer and former civil servant, I never had the time to write opinion pieces. Quite frankly my main concern was ensuring my ships were ready to sail into harm’s way and that if we engaged in armed conflict, I was able to bring the crew home intact. So, writing opinion pieces is a rather new experience for me and I thank Jeanine Martin and The Bull Elephant for allowing me to voice my opinion on pertinent issues that impact our lives.

For those who have never served in the military many think there is no room for free thought nor dissent – quite the opposite is true. Servicemembers are frequently asked for their input on various issues and their input is taken seriously before an informed decision by the commander is reached. I guess many civilians have had their perceptions unfortunately shaped by Hollywood vice the reality of service to one’s country.

Since my commentaries have been published, I have received mixed reviews – some positive and others negative. It is the latter that concerns me because it reflects an unfortunate trend that has been destroying the very fiber of this nation and our communities for several years. That is the decline in civility and the inability for us to listen to all sides of an issue before passing judgment on our neighbor.

One only has to glance at any form of media, social, electronic, or print to see that people are frequently quick to attack the individual vice the ideas they may represent. At the end of the day for many it is about denigrating a person because of his or her beliefs – it happens on all sides of the aisle and in between.

I believe my experience is typical of what has now become the norm in America. Among other things I have been called “ignorant,” “full of BS,” etc. by those who disagree with me.  Instead of initiating a constructive discussion over our differences in opinion, I like others are attacked for my values, beliefs, or ideas. It is as if the goal of the new “normal” is to destroy or humiliate a person vice attempt to understand their respective point of view.

Our Founding Fathers created a Republic where open dissent and freedom of speech was not only encouraged but guaranteed by the Bill Of Rights. They had to foresight to envision the inevitable friction that occurs between citizens across the political spectrum. This is one of the fundamental principles that makes America great. One need only look to Russia as an example where freedom of speech is not an option and dissent is punished. This sacred principle is what our founders fought for and what makes America stand out among other nations.

So, at the end of the day if you do not agree with someone’s politics or beliefs, rather than attack them  just say “it is O.K. to agree to disagree.” Words we all should say more often.

It is O.K. to Agree to Disagree was last modified: April 15th, 2022 by Guest Contributor James Poplar

Your problem is your basis for wrong is how you feel not how you think. If you feel that 2+2 is wrong, then no amount of reasoning will change your mind. You have demonstrated that consistently in the comment sections here.

that is an sbsurd reply

Mr. Poplar… here is a question for you as a Navy guy. The Ukranians seemed to have knocked out a Russian warship. Ok hoorah etc… but does this give you pause for the strategy of maintaining aircraft career fleets are their huge cost? I believe the Chinese just might have a few better weapons systems than the Ukrainians don’t you think? Since that would be where you would direct your fleet strategy of potential threats… Taiwan etc.

Joker, thank you for your query. RE “does this give you pause for the strategy of maintaining aircraft career fleets are their huge cost? ” Not really as we have both kinetic and electronic means to defeat the principal threat to our CVNs the PRC DF 21 https://en.wikipedia.org/wiki/DF-21. USS Stark was hit by two Exocets and lived to fight another day. Unfortunately the Russian and PRC Navy does not place an emphasis on damage control nor is it a wise ship design to have your missiles topside whereas our missile magazines are below decks. In addition our SSNs are far superior We can go toe-to-toe against the PRC any time. Bring it on …

So, are you saying that America is confident that an intercontinental nuclear device or nuclear torpedo cannot get close enough to take out an aircraft carrier? As for ship design, that Russian ship was an antique. How many times has it been reported damaged or sunk by the media in the last 5 weeks? And, American or NATO equipment, troops, and intelligence took out that antique, not the Ukraine. The Ukraine by itself does not have the resources to even find a ship that far off shore, much less sink it. We are also the only country with deficit spending technology, which recently may have finally showed what happens when the big fraud tanks with 536 idiots in control of that which is out of control, impersonating reality.

Has the United States itself actually become a lie? If you say something regarding the USA is the truth, what exactly is that? Or, when you say that, isn’t that the same as someone who says they never lie? How is the USA even a country? It no longer has borders nor law and order. It has interpreted its own Constitution in a way that assures it’s own eventual destruction. Or, haven’t the courts ruled that according to the Constitution , we have no southern border, which actually translates into the USA itself no longer exits because it has no real border? The USA can no longer differentiate between 2 types of sexual organs as one being male and one female. All due to the USA itself becoming nothing but the propagation of evil. Like the sun fuels off its self, doesn’t the USA now feed itself off the by products of its own evil?

Whatever lie the media propagates that Russia is doing, likely that is what Ukraine and NATO are actually doing. Ukraine, Brandon, both intent on evil, believed evil itself, and entirely miscalculated what Putin’s (more evil) response would be regarding this document signed last November.

Twitter does not believe it is OK to disagree. The problem is disagreement is not buttressed by facts and reason but by who screams the loudest and who can censor the most.

Hey Erica, pronoun She It, yesterday your dopey President opened up federal land for leases for gas and oil! Ha ha fool… told you so! Oh… noes… the seas gonna rise… Dopey Joe done let loose the carbon!!! But you simpleton… the Democraps have to save their phony baloney jobs. But.. it will be too little too late. And guess what also? Oil companies are loathe to increase production because you guys are so intent on putting them out of business.
So it might not even help your slimy half of the uni-party. So much for your values though. Don’t feel too bad though little Erica… the GOP screws its voters every chance that K Street brings them a bushel of money. Like on a secure border for example.
Hey at least we’ve got a Great War for both parties to profiteer from!

“Oil companies are loathe to increase production because you guys are so intent on putting them out of business.” Nope, it is because they make more money by not increasing supply (which they could do tomorrow) and keeping prices high

“ That is the decline in civility and the inability for us to listen to all sides of an issue before passing judgment on our neighbor.”

Welcome to The Bull Elephant Mr. Poplar. Based on your thoughtful piece above, you must not have been here long. Allow me to introduce you to exhibit A, Joker, as example extraordinaire of just the type of character of which you cite. (See screed above for reference) Please enjoy your stay here but based on your desire for civility and courtesy, I fear it may be a short lived residency.

He is referring to John Martin you dumbass who has said F you to the authors and whose usual comment to their articles is that is bullshit. I never say anything of the sort to the authors on the blog, shit for brains. I say that to idiots like you and Erica and John Martin. Why don’t you just stay at Bearing Drift with the rest of your stupid cohorts. Which includes Eric. So in the words of John Martin to the authors: F you.

Yes stupid ass, he is talking about Martin. Ha ha F you LOL!! You are full of bullsh.t… that is Martin’s standard comment. Martin doesn’t ever say anything more than that because he is a simpleton like you. Are you the guy who thought that Trump was a Russian agent? Didn’t you buy the Russiagate crap? If so.. you are full of crap… ha ha LOL..

Really, I hasn’t noticed that tendency from Mr Martin. My apologies. How about instead I’ll refer to these as examples 1,2,3. That better for you?

Here’s a lil nugget that I ran across. I’ll leave here for you to ponder:

“Whilst observing howler monkeys, researchers at Cambridge University discovered a surprising trend amongst the males. The louder a male roared the smaller his genitals were.”

Kind of dovetails into the observation of the bigger/louder the truck a man drives, the more insecure he is about his ……well, you know the rest I’m sure.