At almost two weeks old the National Zoo’s Giant Panda cub continues to thrive. Â Today it was announced that the cub is a girl and fathered by the Zoo’s male Giant Panda, Tian Tian. Â It was determined that he is also the father of the stillborn cub born 26 hours after the surviving cub. Â The stillborn fraternal twin was born with numerous gross abnormalities. Â  The surviving cub appears to be feeding and growing well. Â She has not yet been named. Â More on the story here.Â Â  You might be able to catch a glimpse of the cub on the National Zoo’s Panda Cam here.Â 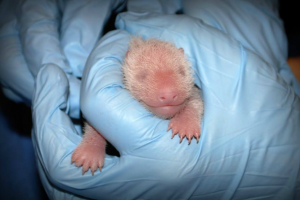