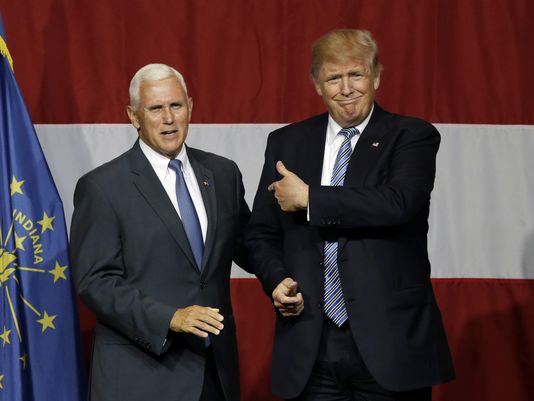 The suspense is over, Trump has chosen the Governor of Indiana, Mike Pence!  As far as I can tell, he doesn’t add much to the ticket nor does he cause any problems.  (More on that later.)  Five things to know about Mike Pence here.

Ten things to know about Mike Pence, including he was an early supporter of the Tea Party, he endorsed Ted Cruz, and Paul Ryan likes him.

Trump will announce his choice on Friday morning at 11:00 in New York.  Since Trump loves surprises, will he now ditch Pence?  If Pence is going to run as The Donald’s VP, he has until Friday at noon to drop his bid for re-election as Indiana’s Governor. Indiana state laws prevent candidate from seeking two offices at the same time.

Trump confirmed via Twitter that Pence is the guy. Not my favorite but shouldn’t hurt the ticket. I would have liked Ben Carson, but if Trump wins he is likely the next head of HHS.

After the terrorist attack in Nice, Trump has announced he will postpone his announcement of his VP choice.

He may not “announce” in the vein of a press conference, but it’s Pence. He’s in NY, following a secret plane ride this afternoon from Indiana to Teterboro, New Jersey. News cameras captured he and his wife deboarding the plane.

Also, CNN has confirmed that Trump has called Pence, offered him the VP slot, and Pence accepted.

Team Trump just came out and said they’ve not made any offers or calls and have not decided but that it’s between a choice of 3.

Yesterday Trump said it was 2 he was choosing between, so who knows? It would be just like Trump to change his mind because the word had gotten out that it would be Pence. Trump loves surprises.

Trump has canceled his announcement and said that he is still deciding. Sounds like the staff have one person picked out, likely somebody who actually is semi-competent, and Trump wants to pick an all bling no experience candidate.

I am waiting until tomorrow ar 11AM. Anything before that is speculation and Trump is clearly making the most of speculation.

We win with Pence or Newt, prefer Newt but it ain’t my choice too make. Nice of Ginsburg to apologize!

It is too late for Gisburg. She has confirmed what everyone with a brain thinks about the current Supreme Court. There are ever fewer constitutional scholars and ever more political synchophants. We even have judges saying that the Constitution is meaningless as a basis for judging anything. This is tyranny.

This is the guy who Trump needs, someone who will in no way divert attention from Trump.

Well, so much for Pence’s career. Shame, I used to like him.

But I suppose if the finalists really were Pence, Christie, and Gingrich…then I guess Pence was probably the best option.

Will take a brave man to sign on with our obnoxious windbag.

Or one with nothing to lose.

Pence has a lot to lose. He’s giving up the Governorship and a future in Politics if this doesn’t work.

His Governorship was in doubt, in part due to his tepid response to Democrats attacking him on Religious Liberty. He’d lost his star appeal, and it showed. That extended from his Governorship to any possibility of running for President himself.

This way he launches himself back into the media, win or lose, this was his best bet compared to what he stood to lose if he was defeated or went quietly into the night after losing his Governorship.