It’s Not About Race, It’s About 50 Years of Government Dependency

In the mid 1960’s President Lyndon Johnson declared a ‘war on poverty’.  Since then the government has spent TRILLIONS on at least 92 different programs to fight poverty.  His focus was on the poor families in Appalachia. Families like the one he visited in eastern Kentucky where the Fletcher family of 10 existed on $400 a year.  [read_more] 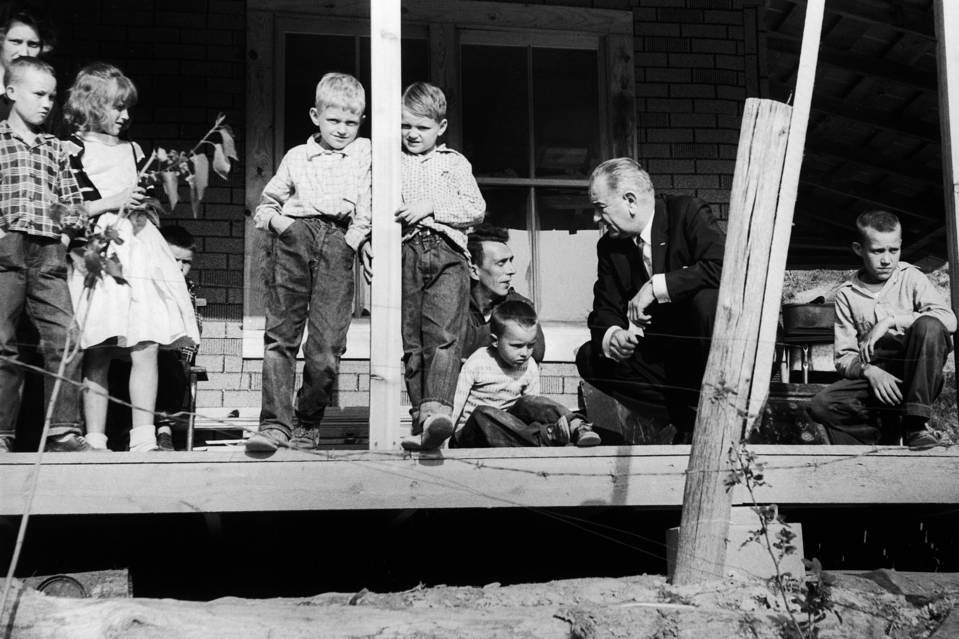 President Johnson convinced Americans that these poor backwoods people desperately needed help. There was less emphasis on helping the poor in cities. Johnson set up welfare, food stamps, medical care and housing for poor people. To receive welfare people were taught the following:

Every message the government sent the poor was wrong. It destroyed the work ethic, taught people never to save a dime, and worst of all it destroyed families. Is it any wonder that most lower class people don’t marry and feel no shame in having children without a father in the home? We taught them to behave that way! We re-enforced the destruction of families and told men they need not take responsibility for their children, in fact, they couldn’t even be in the home. Prior to the ‘War on Poverty’, 20% of Black children were born to unwed mothers, today it’s 72%. Statistically children unmarried mothers are

more likely to perform poorly in school, go to prison, use drugs, be poor as adults, and have their own children out of wedlock.

This is the legacy of the ‘War on Poverty’, destruction of our families, our communities, our schools, and our society.

It’s poverty that drives the riots in Baltimore and Ferguson, poverty brought on by ‘The Great Society’, 50 years of liberal programs that have failed people in our cities and in the country.  When welfare was ended during the Clinton administration, disability payments sky rocked. Disability payments are the new welfare payments.

Now we have poor people rioting in Baltimore and Ferguson and other cities across the country. They are beyond frustrated with their lives. They been trained by the government to live in poverty, have children but not families, and they’re stuck in failing schools.  All of this because of the TRILLIONS of dollars spent to ‘help’ them.

The best of intentions, the worst of outcomes, and the big fools in the Democratic party say to push on with ever more handouts. It hasn’t worked in 50 years!  How many more years, how many more families destroyed, before we abandon these failed policies?

It’s not about race, it’s about poverty created by dependency on government for everything in their lives.

It’s Not About Race, It’s About 50 Years of Government Dependency was last modified: May 11th, 2015 by Jeanine Martin

Another good article. Message needs to keep getting out there. What too many people don’t realize or acknowledge is the communist principles behind liberal policies in America. Destroy the family and religion – people’s traditional anchors – to make the government bigger and more necessary. Diabolical.

The family is the foundation of our society, but its importance as a nurturing and stabilizing element has been eroded by our hedonistic lifestyle. Pop culture celebrates loose living movie stars and athletes, and casts the family as an old fashioned novelty. Stir in a few race hustlers like Sharpton and Obama, and you have a combustible brew of poverty, ignorance, and resentment. Just wait until the cops in Baltimore are found not guilty of the the states attorney’s trumped up charges.

Could you please tell me how can one have a family, (foundation) without decent jobs?

Where have our jobs gone and who allowed them to go there?

Who has allowed cheap illegal labor to flood into the United States?

All in the name of corporate and special interest campaign and PAC money.

The politicians from both political parties have sold this country to the American Corporation. Without jobs we got nothing.

Except debt racked up paying for corporate subsidies, (QE) and government programs for the poor.

Before you take away the welfare, how’s about bringing the jobs back?

How’s about campaign and PAC reform?

A lack of decent jobs sure hasn’t kept many, many unwed mothers and hit-and-run sperm donors from producing children. Inner city residents need to take advantage of the educational opportunities available to them. Then they will be able seize opportunity when it presents itself. And Reihardt, it is really difficult to attract businesses to the dangerous inner cities. Plenty of money has flowed into Baltimore. It has not been well used by those in charge, and we know who they are.

I do not disagree with you that many young women in the inner city are having kids just to get government assistance. And sometimes these people vote.

However, people who go to good colleges, rack up 10’a of thousands of dollars in student loans, do not get pregnant, are working for little more than minimum wage. No jobs when they get out of college.

Can you argue that exporting jobs to Communist China the last 20 years, importing cheap labor from/thru Mexico for 30 years, has, or is, making this country a better place to work and live?

We have always had the poor, and always will. We imported the ancestors of the people that you are talking about as slaves, and put a bull whip to them to build the foundation of this country. And you think we are not going to pay a price for doing that?

Now, it looks like we are going to work for them. At least those who can find a job these days. It is what it is.

Reinhardt, this article reinforces your concern about jobs.

However, at some point, we need to remove the never-ending excuse of slavery. That ended six generations ago, and many blacks have not let that be an excuse for failure to prosper.