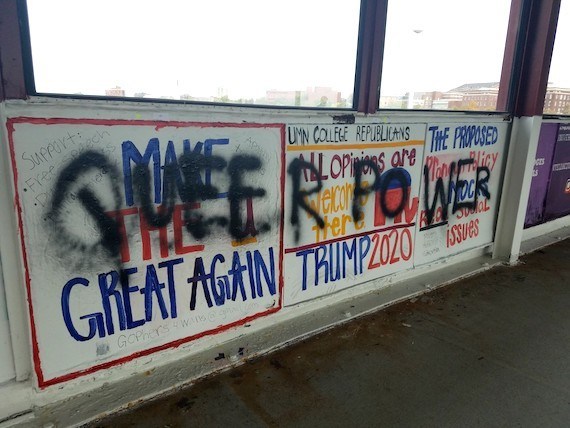 It's not the "Green New Deal" that we should fear, but an overreaching federal government acting on the whims of Leftist activists if Democrats take control of Washington in 2020

Much of the conservative media and GOP is concentrating its messaging to counteract the outrageous proposals by Democratic presidential candidates and their cohorts in Congress, such as the Green New Deal, Medicare for All, free tuition and absolving of student debt.

But knowing Washington how I know Washington, none of these proposals will ever make it through Congress – even one controlled by the Democrats – nor can much of it be implemented through executive order.

That’s because while Leftist activists and voters are delusional to think Pollyanna words equal action, practical lobbyists for the oil, gas and health insurance industries have friends on both sides of the aisle, and are most successful in blocking things that hurt their members’ bottom line.  Just wait to see how many of their PACs pour money into the Trump campaign.

It’s fine for Republicans to go after these fantasy proposals to get votes.  But what the GOP also needs to do is remind voters about how ordinary citizens, their employers or favorite sports team or actors can be ensnared by the Multicultural Mob that controls the Democratic Party, particularly if the activists who control it ally with a future Obama-like president in the Oval Office.

Obama’s promise to “transform America” failed to achieve much through legislation, but helped unleash the kind of activism we see today on Left, where every week we are treated to some protest or boycott of a business that the Left tags as “racist,” “homophobic,” “sexist” or “xenophobic.”  It’s all aided and abetted by the media, academia, Hollywood and major financial backers like unions and George Soros.

But the power of the federal government to join with the activist Left leads to bad results and division.  For example, unable to help urban black people in any meaningful way, the Obama Justice Department responded to Black Lives Matter demands that police stop shooting at unarmed black suspects, while ignoring the thousands of African Americans who are killed in crimes in the nation’s cities.

The U.S. Patent Office under Obama ruled the Washington Redskins’ trademark was invalid since it was offensive to Native Americans (only to be overturned by an appellate court).

Failing to change those sports mascots, activists unleashed pressure on teams like the New York Yankees and Philadelphia Flyers to stop playing “God Bless America” since it was immortalized by Kate Smith, who sang racist songs in the ‘30s (though black singer and Leftist icon Paul Robeson sang the same songs), and  remove her statue in front of their home arena.

We will see more unequal treatment.  For example, Leftist outrage in the media and a threatened boycott led comedian Roseanne Barr to lose her starring role on TV for making monkey comparisons to former Obama Chief of Staff Valerie Jarrett, but actor Jussie Smollett, who was charged by Chicago police for staging an attack on him by Trump supporters, kept his role on “Empire.”

Muslim Democrat Reps. Rashida Tlaib and  Ilhan Omar, and Virginia Del. Ibraheem Samirah,  can say or do what they want to sew division and play “victim,” but the revelation of Gov. Ralph Northam, a Democrat, in blackface some 35 years ago, was met with resounding condemnation from Democrats calling for his resignation (though he still is in office).

“Elections have consequences,” we remind the ex-Hillary Clinton supporters with sour grapes for her loss to Donald Trump, so we have to expect if Democrats resume control over the White House, the bureaucracy will bend to its will on POLICY. However, a Democratic administration in Washington that kowtows to every activist whim without looking at a larger agenda is just bad policy and bad news.

It’s fearful when the “Protest-icrats” form an unholy alliance with bureaucrats to gun for INDIVIDUALS and GROUPS they do not like while leaving others alone.  Remember how Obama’s IRS slowed down Tea Party group applications for 501c3 nonprofit status, or investigated Fox News reporters.

Democrats feel white supremacist groups are more of a threat than Islamofascist terrorists, so does it stand to reason that if Facebook can ban more Rightist persons from its platform, won’t the Multicultural Tribunal focus federal government action on Rightist groups vs. Muslim terrorists?

What if Congress passes “red flag” laws on gun purchases?  Will conservatives deemed to be violent – perhaps Alex Jones – lose their gun privileges?    Will violent protesters like ANTIFA be encouraged to carry guns and become the “brown shirts” of the new administration to harass conservative speakers and journalists more than now?

I am unware of Trump’s administration using its powers to shut down leftist groups.  In fact, Trump has been derelict in doing much to revoke federal grants and loans to campuses which practice censorship in and out of the classroom, or do dumb things at Virginia Tech’s recent orientation, as we learned on this blog?

Democrats are wimps in not standing up to aggrieved “victim group” leaders and their agendas, which are more about achieving notches on their belts than real action to help people.  We see this playing out now in Leesburg, where I served in office for 10 years. The local NAACP is relentless in its campaign against two councilmembers who defaced proclamations in June as a protest, so the liberal mayor, Kelly Burk, is facing the threat of a recall from them since she did not support censuring the two.

This, my friends, is the real threat of socialism – not the outlandish proposals from Bernie Sanders and Elizabeth Warren, which won’t pass Congress, but the unleashing of activist cockroaches on conservative critics or even their own who don’t toe the line, and making any them into “unpersons” in the Stalinist sense.

It’s not the socialist policies I fear – but the unholy alliance of activists and the White House was last modified: August 20th, 2019 by Guest Contributor Ken Reid

Will Democrats use mob assault of Capitol as a ‘Reichstag Fire’ to seize more power, crimp conservative views? – The Bull Elephant January 12, 2021 at 3:12 pm

[…] I noted in this TBE piece,  white supremacist and wacko groups like Qanon do not have many of their members with political […]