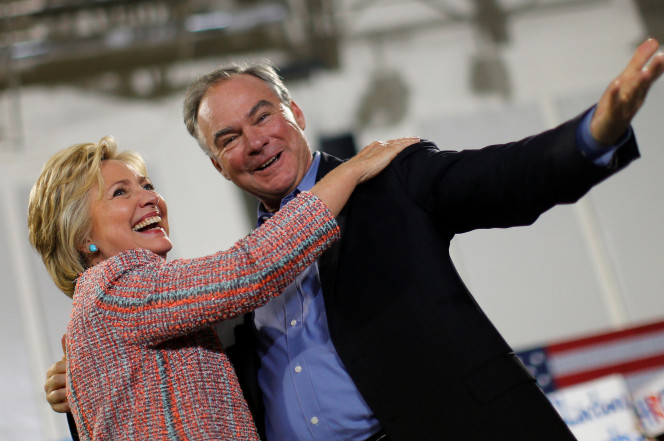 Coming as no surprise, Hillary has texted to supporters her choice of Tim Kaine to be her Vice President.  Between Governor McAuliffe and Tim Kaine as Vice President, Virginia should turn blue in November once again.

From the NY Times:

In the end, Mrs. Clinton, who told PBS she is “afflicted with the responsibility gene,” avoided taking a chance with a less experienced vice-presidential candidate and felt no political need to push the historic nature of her candidacy by adding another woman or a minority to the ticket.

Candidate for Lt. Governor and state Senator,  Bryce Reeves had this response to Hillary’s choice of Kaine,

“In his desperate attempt to impress Hillary Clinton by embracing a liberal DC agenda, Tim Kaine joined the Bloomberg-led gun control movement in the Senate last month,” said Reeves, who is a US Army Ranger veteran and former Prince William County detective. “Virginians would reject a Clinton-Kaine ticket because we value our Second Amendment right to self-defense, especially since we aren’t entitled to the Secret Service protection Hillary Clinton receives.

”There may be more issues with Hillary’s choice, such as Kaine’s criticism of Obama’s Syrian policy which Kaine called ‘a joke’.   Wasn’t Hillary Secretary of State when they instituted this policy? There’s also the issue of gifts Kaine accepted while Governor of Virginia.

More on Hillary’s choice of Kaine here and here.

Kaine? Snorefest. The “safe” choice. Would love to be a fly on the wall in the Virginia’s Governor’s Mansion.

Why? You’re already getting swatted plenty of times now.