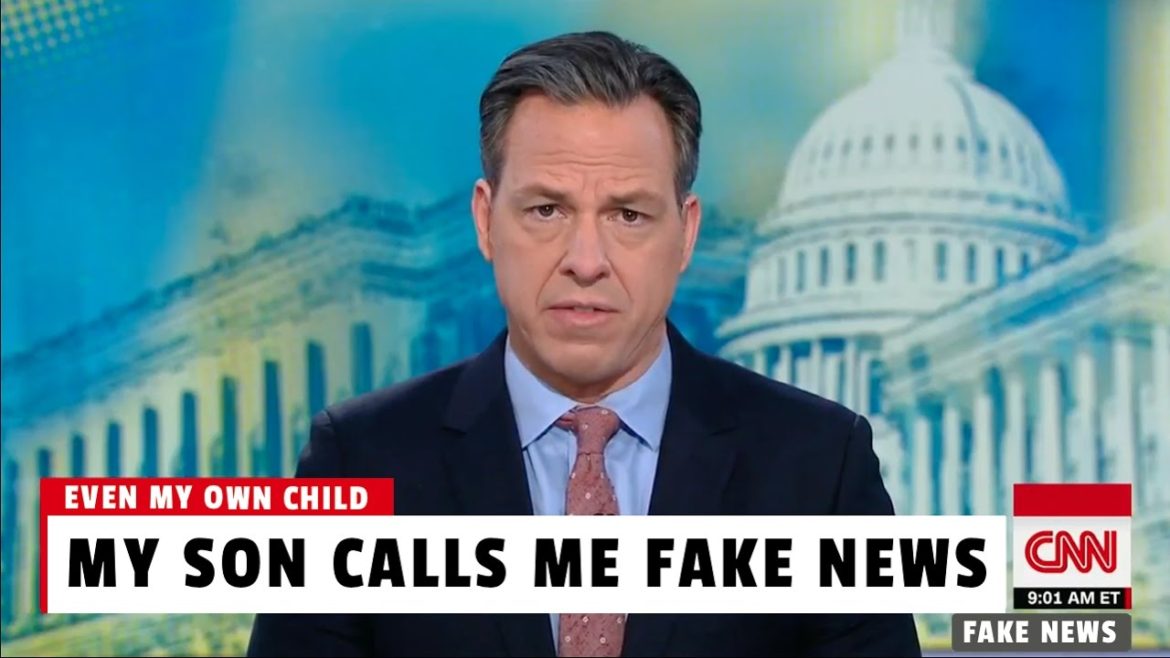 When a domestic extremist kills innocent Americans we usually give the President the benefit of the doubt and assume he does not side with the extremist. Well, Jake Tapper and the liberal media is not going to extend that benefit to President Trump until he specifically denounces white nationalism. A few months ago he did condemn ALL political extremism, when a Bernie Sanders supporter shot up a baseball field full of Republican members of congress. They did not require him to denounce socialism, which was the religion of the shooter, but this time such a blanket condemnation is not enough. The media wants the headline, “Trump condemns White Nationalism.”

The media wants something that can be seen as a denial. They also want to keep the story going. They can say one week later, Trump still has not denounced white nationalism. Let’s spend that next segment on CNN pondering why.

As I said, the partisan nature of the media has changed:

In 1995 when a member of a militia group drove a truck bomb into a federal building killing 268 people, we assumed the President, Bill Clinton at the time, opposed the action. No one in the media suggested that he needed to be forceful in his denouncing the militia movement. We all just assumed that he opposed the militias.

In 1975 Charles Manson and Lynette “Squeaky” Fromme hatched a plan to start a race war in America. It failed, but no one claimed that President Gerald Ford needed to specifically denounce dangerous cults. The media just assumed he opposed dangerous cults.

But it is different today. The media hates Trump and any opportunity they can find to tar him they will take.

Years ago there was a supermarket tabloid that broke a major story. They claimed that the Soviet Union had contacts with aliens from outer space. The aliens were helping them with their space program. Only one hitch with the story. They had no evidence, but the editor came up with an idea. He told the reporter to keep calling the soviet embassy and get a denial. The reporter tried for one year, finally someone at the embassy, after laughing for 20 minutes no doubt, agreed and said “we deny it.”

They had their headline, “Aliens from outer space in contact with the Russians, Soviets deny report.” By denying it the Soviets gave some credence to the story.

Like the tabloid reporter Jake Tapper wants to force Trump to either denounce white nationalism, or admit he is a white nationalist. While he is at it he might want to ask if Trump has stopped beating his wife.

Jake Tapper spent two segments of his showing trying to brand Trump a white nationalist. And on his show he had, as the token Republican, Bill Kristol. You remember Bill. He is the editor of the Weekly Standard. The fake conservative magazine that promoted the Iraq war. Bill claimed that the war would be a “cakewalk”. Well, Trump denounced the war as a disaster, a slight that Kristol no doubt took personally.

So Tapper has Kristol on the show, knowing he is a “never Trumper” who will attack the President. Tapper is a propagandist, and Kristol is a tool and CNN is a disgrace.

But the good news. It sure is great to have a Republican President that does not take the foreign policy advice of Bill Kristol.

you are reaching back to 1975 to make a point about Trump? Trump is not like any other president, especially when he speaks so you writing is juvenile.

I think you real point is why must Trump denounce the white nationalists. Why must he specifically call them out. The answer is simple. What a president says matters. Image matters. Perception matters. Trump speaks without any regard to how his message is recieved. As of tonight, he appears to be backing off his denouncement of the Klan – this might not be what he means but it is what is being heard. Trump is responsible for his message and should be specific, stick to the point, denounce the white nationalists, and leave it at that. He does not need to temper his comments to show disdain for violence. He does need to show he is not connected and wants no connection to the white nationalists.

Why is it you are not satisfied with his denouncement of both sides? Why does it only seem to count if he denounces the Klan without also denouncing the hatred on the left? When whites hate blacks it’s horrible, but apparently you believe that when blacks hate whites, it’s no problem? Racism is wrong, no matter what color the racist happens to be and there were two groups of low-life racists in Charlottesville.

maybe because the Klan and the Nazis are the ones claim the US as a white nation, shouting get the Jews out, and all the other hate – which is what we fought WWI about

This is not about the actual clash – it is about the acceptance of white nationalist and implied endorsement by the WH and most of those here on TBE. There is a simple way out – condemn the nazis and then stay quiet – something your boy TRUMP cannot do

The simple truth is one can (and should) condemn the Nazis, while NOT giving the progressive anarchists a pass. A fight requires TWO sides, and there were two sides in Charlottesville. To denounce one but not the other makes you a bigot, no matter which side you are excusing.

The “implied” acceptance of white nationalists is only in your head. Just because you chose to infer does not indicate that the implication was there. Despite the fact that I have very specifically condemned the very concept of Nazism, you CHOOSE to infer acceptance. On the other hand, I do not need to infer your acceptance if the fascists/anarchists on the other side, as you have specifically chosen to accept their behavior.

I find it amusing that those on the left become indignant because someone on the right criticizes horrible behavior of the right and the left – when they cannot possibly bring themselves to admit that people on their side could possibly have behaved badly.

You are only satisfied if everyone thinks that the other side was all wrong and your side acted like heroes. Well, your heroes also attended a rally with baseball bats, clubs, mace and other weapons, yet you think they were not at all responsible for the mayhem. Says a great deal about you, my friend. A very great deal.

Back in the 60’s I used to listen to Radio Havana Cuba among other stations broadcasting on short wave. A bit further down the dial was a station transmitting from a small Caribbean island called Swan Island. That station, called Radio Swan, broadcast the US version of Cuban news. The lesson I learned from that experience has come in handy in the 21st century, as I permanently turned off the CNN/Fox TV and instead listen to a local Latino music radio station.

Sadly, it isn’t just the “liberal” media with the lack of common sense.