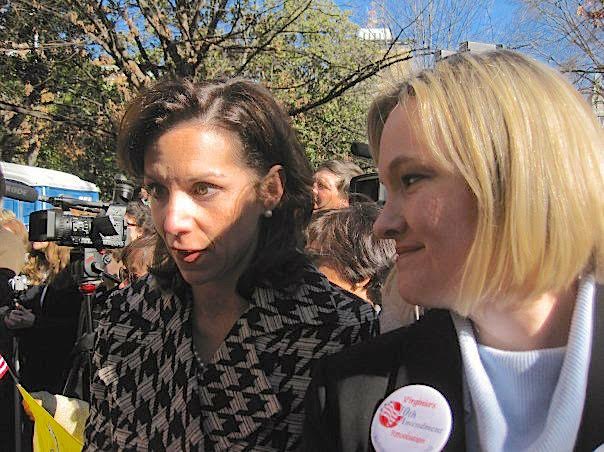 In the race for Lieutenant Governor I am proud to support my long-time friend Jill Vogel, a proven conservative who tirelessly works to advance our principles.

I first met Jill in 2004, long before the Tea Party was founded, when she was serving as a board member on the Virginia Conservative Action PAC while I was the political director. The mission of this PAC was to hold Republican elected officials accountable to voters and make sure they stayed true to their principles and conservative values.

The things Jill and I worked on then were the same issues Conservatives are concerned about today.  We made sure our Republican electeds were not compromising on life, the second amendment, and stayed focused cutting taxes and the ever growing budget.  Jill was always a strong advocate for challenging wayward Republicans who were failing to live up to these campaign promises.

You have to remember that challenging Republicans in a GOP primary wasn’t as in vogue as it was in the current tea party era. So few people back in those days were willing to stick their neck out, challenge the establishment, and hold electeds accountable. However, I always found Jill willing to wage the fight for what was right, regardless of the challenge or popularity of the decision.

In the years since VCAP, Jill and I have worked on countless issues ranging from policy to defense of our movement.

When Obamacare passed in 2010, Jill immediately joined with us and took action. That next session Jill introduced the legislation declaring Obamacare’s overreaching mandate to be illegal in Virginia and giving Attorney General Ken Cuccinelli the standing he needed in court to mount a challenge to the law.

When President Obama’s IRS began targeting conservative groups, Jill helped us fight back. She and her law firm helped defend Tea Parties, Republican Womens’ Clubs, and other conservative groups against this federal overreach designed to silence conservative dissent. She even took many of the cases pro bono.

When legislators debated Virginia’s largest-ever tax hike in 2013, Jill stood firm. She recognized immediately that we had a spending problem, not a revenue problem. She stood up for taxpayers and opposed the tax hike. However, she wasn’t simply opposed to fixing transportation problems. Years before, Jill helped lead the charge to audit VDOT, improve accountability, and set clear priorities to focus resources where they do the most good – all in keeping with a conservative governing approach.

As a grassroots conservative, I believe actions speak louder than words. I have always known that I could count on Jill even when so many of our Republican majority were voting for tax increases and bigger government.

In the Senate, Jill has consistently stood up for our Second Amendment rights. She has consistently introduced and carried bills to expand our gun rights, one reason she has an A+ rating from the NRA and the endorsement of the VCDL-PAC.

Jill has also carried tough bills to defend the lives of the unborn and protect Virginia against the harmful consequences of uncontrolled illegal immigration. In fact, she’s the only one in the race who has ever introduced bills on those problems.

In the 13 years I have known her, Jill has demonstrated the character, qualifications, and experience to be our next lieutenant governor. She has earned her reputation as a relentless hard worker and a conservative with a backbone.

If you believe as I do that a long track record of results matter, please join me in supporting Jill Vogel to be our next Lieutenant Governor in the June 13th Republican Primary.

Vogel nor Wagner will get my endorsement because they are both in bed with the power company. Frank Wagner was the chief patron for SB 1349 in 2015.

Go to hell Frank and Jill.

I’m popping my popcorn as we speak. This should be good.

Popcorn is my favorite snack! The kids and I make it homemade at least once a week. It is a Radtke tradition. 🙂

In your honor then 😉